Over the last few quarters, Check Point Software (NASDAQ:CHKP) has quietly returned to form. The network security company remains a prodigious generator of cash, but it's also managing to grow its product sales again. In doing so, it's managed to expand sales in the data center market, and established sales in the small and medium-sized, or SMB, market. Check Point remains one of the highest quality companies in network security, and its valuation makes it attractive for value investors.

Check Point muscles in on the SMB market

It seems that a year doesn't go by without a new incumbent security firm grabbing the market's attention. A couple of years ago, Fortinet (NASDAQ:FTNT) was the new kid on the block, with its expertise in Unified Threat Management for SMBs. Palo Alto Networks (NYSE:PANW) then came along, armed with its next-generation firewalls and an intent to be the "Check Point Killer."  Now, FireEye is the flavor of the month, thanks to its malware and advanced persistent threat protection. Meanwhile, incumbents like Check Point and Cisco (NASDAQ:CSCO) were seen as subject to inevitable market share erosion. Well, it didn't quite work out like that.

Security is only a small part of Cisco's overall activities, and the company was easily able to use cash flows generated from elsewhere to buy security company Sourcefire. However, Check Point was forced to innovate. One key measure has been the 2013 launch of its SMB-focused 600 and 1100 series appliances. In fact, IT research company Gartner now has Check Point approaching Fortinet as the best-positioned company to provide UTM solutions to the SMB market. This is no mean feat, considering that Check Point has a reputation for high quality, high ticket price solutions aimed primarily at large corporations. Indeed, Check Point intends to capitalize on its new products with a dedicated sales team focused on the SMB market.

Strong in the data center
While its SMB performance is impressive, the recent reacceleration in product revenue was put down to "growth... driven mainly by the success of our data center products, the 13500, the 21000 family and the super high end 61000," according to Check Point's CFO, Tal Payne, on a recent conference call. This is a particularly interesting development because Palo Alto is reported to be introducing new, high-end data center and service provider product platforms in early 2014. This doesn't seem to have affected Check Point's ability to sell to the data centers.

The results of all of Check Point's efforts can be seen in the return to growth of its product sales. 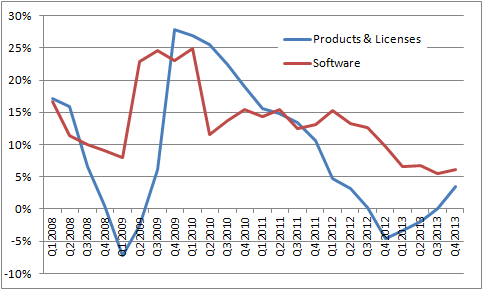 Deferred revenue stronger for Check Point
However, product sales only tell part of the story of the fourth quarter. In fact, despite the growth, fourth-quarter product sales were $156 million, around $2 million less than the same quarter in 2011. The real story is that deferred revenue growth was very strong at 14%. Following deferred revenue is important because Check Point is increasing the software component of its revenue. Product revenue tends to be booked up front, while software revenue tends to be recognized over time.

One way to judge Check Point's results is to compare revenue (and the change in deferred revenue) with previous years. As the chart demonstrates, it was a very good quarter. 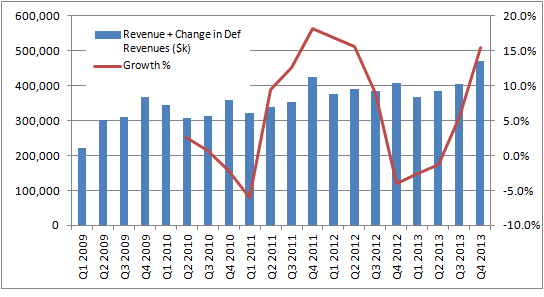 Where next for Check Point?
The network security sector is competitive, and also likely to see some consolidation this year. Companies like Fortinet and Palo Alto will obviously attract some speculative interest, while Check Point is positioned more as an acquirer. Its cash balance of $3.6 billion (around 28% of its current market cap) and strong free cash flow generation ($780 million as reported for 2013) give management a lot of leverage. Share buybacks are planned to increase to $200 million per quarter, which still leaves an opportunity for a $1 billion-plus acquisition.

Check Point's 2014 is possibly going to involve a long-awaited acquisition, plus expansion into the SMB sector, while hopefully continuing its recent growth resurgence. If plans come together, the stock will look even more undervalued than it looks today. Any stock generating over 6% of its market cap in free-cash flow is worth a look.