Chipotle Mexican Grill, Inc. has plenty of growth ahead of it, but that doesn't justify buying the stock.

Chipotle Mexican Grill (CMG 1.79%) turned in a stellar performance in Q4, recovering from a weak start to 2013. Total revenue increased more than 20% for the quarter and 17.7% for the full year. Meanwhile, comparable restaurant sales rose 9.3% last quarter and 5.6% for all of 2013.

2013 was another good year for Chipotle.

I love Chipotle. The food is tasty, and I also appreciate the company's commitment to sourcing ingredients responsibly and giving its best employees plenty of opportunities to move up the management ranks.

However, I don't like Chipotle stock very much; it's even pricier than the food! While the company has plenty of growth left, there are other investment opportunities with similar growth potential at much more attractive prices.

Chipotle remains popular
Chipotle's Q4 comparable restaurant sales growth was the company's strongest result since Q1 of 2012. In some ways it was even better, because menu price increases contributed to Chipotle's sales growth in late 2011 and early 2012, whereas last quarter's gain was driven by higher traffic at its restaurants.

In light of the stronger-than-expected results, Chipotle's management raised their forecast for 2014 comparable restaurant sales growth. The company now projects a low- to mid-single-digit gain, excluding the effect of any menu price increase.

Additionally, Chipotle CFO Jack Hartung stated on the company's recent conference call that Chipotle is likely to raise menu prices during the third quarter. This will allow Chipotle to recoup the impact of commodity cost increases, which drove a slight decline in its restaurant-level operating margin last year. In other words, not only will a menu price increase boost sales growth further, but it will also push Chipotle's profit margin higher.

The price is the problem
Given that Chipotle has strong traffic and sales momentum entering 2014 and the company's margins could get a lift later this year from a menu price increase, what's not to like?

The answer is valuation. At this time last year, Chipotle stock traded for around $300, which seemed fairly attractive. By contrast, the stock has jumped to more than $540 and touched an all-time record high of $568.90 last week! 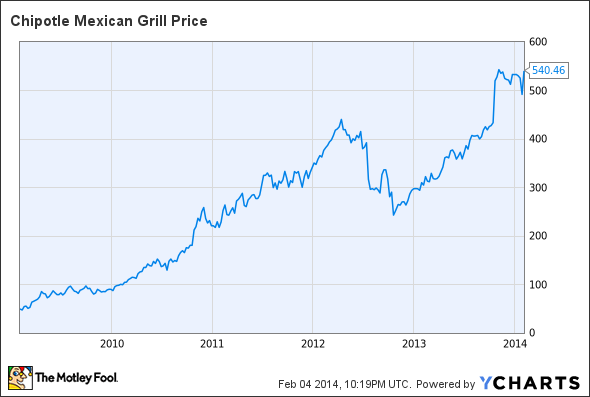 At that price, investors are paying more than 50 times Chipotle's 2013 earnings. That's about 3 times the market average. To justify that price, Chipotle will need to deliver a stunning level of long-term earnings growth.

How fast can Chipotle grow?
Chipotle's recent results demonstrate that the company is far from saturating the market. However, it's hard to avoid the fact that growth is gradually tailing off. Chipotle added 180 net new restaurants in 2012 and 185 in 2013, and it is projecting 180 to 195 new restaurant openings in 2014. While the absolute number of store openings is similar, the growth rate in Chipotle's store count has slipped from around 15% in 2012 to a projected 11%-12% in 2014.

Chipotle may have trouble pushing its growth beyond the recent pace of just under 200 new restaurants annually. Unlike many of its competitors, Chipotle does not franchise. This allows it to offer a more consistent, high-quality experience, but it also creates organizational barriers to faster growth. (Think about it this way: if there are 250 working days in a year, Chipotle's development team is choosing a new restaurant site almost every day!)

Within each restaurant, opportunities for future sales growth are limited as well. Chipotle frequently has long lines at peak lunch and dinner times. This has led to a focus on "throughput" -- speeding up service times -- in recent years. The company has made good progress in this regard, setting a new record last quarter.

Still, there are physical limits to how quickly Chipotle can serve customers! Better practices may allow the company to increase peak-hour transactions by 10% or 20% over time, but these initiatives aren't going to double sales. Chipotle is now looking into mobile payment systems, which may speed up checkout times, but this isn't likely to be a panacea, either.

Foolish conclusion
I am confident in Chipotle's long-term prospects, and I think the company could easily grow sales at a 15% annual pace through the end of the decade. However, even that level of growth isn't enough to justify Chipotle's current valuation.

For example, Spirit Airlines (SAVE 0.14%) has been growing even faster than Chipotle in recent years and has equally good long-term growth prospects. Yet it is trading for less than 20 times 2013 earnings! Some of that difference is warranted by the riskiness of the airline industry, but the risk/reward trade-off for Spirit still seems much more enticing.

Long-term investors in Chipotle who buy today and hold for 10-20 years are unlikely to lose money, due to the company's consistent growth and large opportunity. That said, Chipotle's total return is still likely to trail that of the broader market due to its pricey valuation today.

Adam Levine-Weinberg has no position in any stocks mentioned. The Motley Fool recommends and owns shares of Chipotle Mexican Grill. We Fools don't all hold the same opinions, but we all believe that considering a diverse range of insights makes us better investors. The Motley Fool has a disclosure policy.