2014 starts a dismal year for Duchenne prospects by Sarepta, Prosensa, PTC and Retrophin

Duchenne's muscular dystrophy is a debilitating disease of young males resulting from an early stop sign (nonsense mutation) in an essential muscle protein dystrophin. While only 35,000 patients in the US and Europe are afflicted, the disease is so devastating and currently incurable that drug therapeutics receive considerable attention any time trials may indicate either a cure or at least a delay in disease progression. Currently patients only live to their twenties, and have had high hopes for a therapy ever since improvement was reported from trials for Sarepta Therapeutics's (SRPT -3.31%) eteplirsen and Prosensa's (NASDAQ: RNA) drisapersen.

In the midst of recent setbacks for both of those closely watched therapeutics, however, it is worthwhile to look at the other biotechs aiming for the same goal, such as PTC Therapeutics (PTCT -2.62%) with ataluren and Retrophin (TVTX -2.47%). Sadly, the picture is not much rosier for them either.

Sarepta clings to fleeting hope for early approval
Following stellar clinical data for patients improving by six-minute walk tests, Sarepta was hopeful filing with the FDA last year. The agency questioned the studies and gave a soft denial for early approval, sending share prices down, but it did not issue a final decision on the question of early approval for eteplirsen. Following recent speculation last month that the FDA wouild reassess that question of early approval and the release of additional data from the Phase II study that patients on eteplirsen beat those on placebo by 64.9 meters in walk tests, Sarepta saw a 35% increase in price.

Sarepta's fate, however, was partly tied to that of its rival Prosensa -- a former partner of big pharma company GlaxoSmithKline -- and its DMD drug drisapersen. Following a failed late-stage study in September for drisapersen, regulators began questioning the biomarker (dystrophin) used in the Phase IIb clinical study of eteplirsen that had so many Sarepta investors excited. While this does not reflect on the statistically significant clinical improvement seen by patients, it does still strike uncertainly in scientists and investors alike. 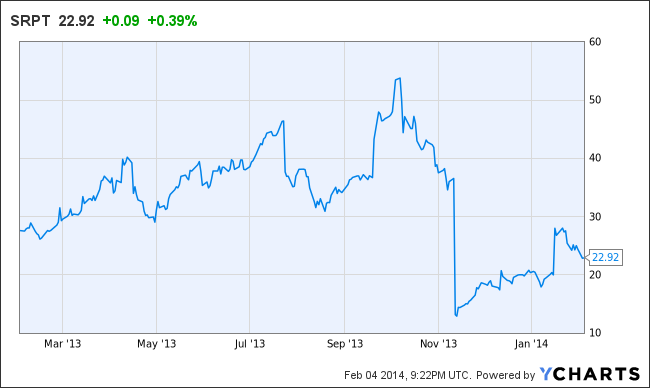 For Sarepta, the FDA's initial ruling meant that it would have to conduct additional studies and be unable to file a New Drug Application without Phase III trials. In the best case scenario, the FDA reevaluates the new data and determines it does want to grant early approval, but little in the new data would justify a reversal for the FDA. More likely, Sarepta will have to conduct Phase III studies, which would delay approval by a couple years. Sarepta then could be a cheap buy now in the midst of the likely FDA final decision to not grant early approval, with projected payoff after Phase III trials are conducted.

Approval, albeit delayed, is likely inevitable, but uncertainty still surrounds Sarepta in large part because the cost of Phase III trials that may spur a need to raise capital. As speculation continues to surround early approval for Sarepta, only bad news is on the horizon until investors accept that the FDA is not likely to budge with the new data. Once that happens, the picture is tentatively more optimistic. Assuming Sarepta is able to fund the studies asked of it, each round of data from the clinical trials should advance their value until eventual application filing.

Meanwhile, investors should not forget that Sarepta has other drugs besides eteplirsen, although admittedly the approval of its flagship drug would validate the approach of the rest of Sarepta's experimental therapeutics. As such, the value of eteplirsen reaches beyond just the DMD indication into boosting confidence for the rest of Sarepta's pipeline, particularly in antivirals. This may explain the disproportionate boost in value following poorly grounded speculation of FDA early approval.

Prosensa looks on its way out
For Prosensa, former partner GSK has handed back drisapersen, but the company nonetheless released Phase III extension data last month that showed early administration could delay progression of DMD. However, the new clinical data still do not address the fundamental issue with the original studies which is that the patient population used in the studies is too similar to a patient population recently found by Muscle to be confounders of the six-minute walk test. In other words, if Prosensa wants to address the FDA's issue with its studies, it will need to completely restart trials with a brand new patient population. Besides being a huge step back for time, Prosensa's cash reserves may not be able to handle the R&D costs especially following the loss of backing by behemoth GSK.

Additionally, both Prosensa and Sarepta are intrinsically tied in the minds of investors and, to some degree, the FDA. Both molecules work on almost identical mechanisms as exon-skippers, but as much as they are rivals they are also partners as changes in the development or approval process in one are felt by the other. With Sarepta's much rosier prospects, bad news for Sarepta will be very bad news for Prosensa, and one more blow for Sarepta will be a setback for eteplirsen but could be a final strike for drisapersen.

PTC officially rejected by EU – time to throw in the towel?
Meanwhile, PTC Therapeutics is often forgotten in the DMD debate despite the fact that PTC Therapeutics and Sarepta are actually the largest companies (by market cap) with DMD treatment in development. PTC has not been faring any better than the others, however. Their compound, ataluren, was formally rejected by the EMA after the agency's initial negative response in March of 2013.

This cannot have been a surprise, as ataluren failed Phase IIb studies for DMD and Phase III studies for cystric fibrosis. However, CEO Stuart Peltz has staunchly argued that even without statistically significant results, the "clinically meaningful benefit" improvements of patients by walking distance should justify approval. The day of EMA rejection (January 24), the stock dropped 20%.

However, Peltz is likely overly optimistic – besides lacking clinical data proving efficacy, even the mechanism of action of ataluren has been under attack. Last summer The Scientist published an article on in vitro studies of the drug showing that it did not override the early stop sign for protein production that causes DMD.

Nonetheless, if nothing else, PTC is tenacious. They are currently in Phase III trials with release of data expected in mid-2015 and they plan to file for reexamination of their application with the EMA. They have 60 days following the original opinion to do so and CHMP will have 60 days following that to issue a decision. Sadly, there is nothing that indicates a warrant for EMA to reverse its decision.

More likely, barring incredible results that only reveal themselves in the Phase III studies, it is back to the drawing board for PTC – or possibly a new application submission to the EU.

Retrophin: as unlikely as the others
Lastly, small biotech Retrophin should not be discounted either. It is much farther behind the others as far as studies go for its agent RE-001, and it is the smallest company of the four mentioned in this article, but RE-001 does work under a different mechanism than the other therapeutics. As such, the dystrophin substitute will be insulated from bad news from its fellow DMD therapy rivals.

Retrophin recently underwent an IPO and interestingly, while RE-001 is still in its pipeline, no money from the IPO was earmarked for the development of this therapeutic. Further, there are neither patents nor licenses for the agent, meaning it is likely low on the priority list for Retrophin.

The bottom line
DMD is an excellent target for drug companies given the orphan drug designation that should be easily acquired and thus much faster track to approval and much lower costs associated with prolonged R&D. Major players Sarepta and Prosensa, however are floundering, with most optimistic prospects with Sarepta...but at least a couple years down the road. Meanwhile PTC and Retrophin have their name in the game, but it is not clear that they have any hope behind reaching the finish line.