In a world of political instability and flattening growth the Canadian oil sands offer dividends and steady production.

Canadian oil sands producers have lower margins than many of their southern neighbors, but they are still promising investments. Even in the expensive Alberta oil sands some firms continue to produce free cash flow. Thanks to a mix of established open pit mining and in-situ techniques the oil sands are shedding their image as unprofitable and stagnant investments. 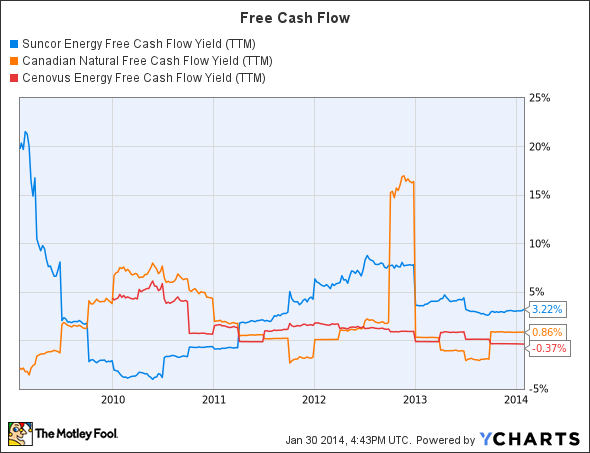 Over long periods of time stocks with higher free cash flow tend to outperform the market. Intuitively this makes sense. It is easy to fudge earnings numbers by deferring too many costs or recognizing too much revenue, but it is difficult to fudge cash flows. A company with free cash flow is able to pay its bills and still has money left over. That being said growing companies with little free cash flow can still be worth your time, but their investments must be profitable.

The above chart shows how Suncor (SU -0.53%) has the highest free cash flow yield of these oil sands operators. Suncor's free cash flow success is related to its integrated model and management's focus on quality growth.

Suncor cancelled its Voyager upgrader when it became clear that upgrading heavy oil makes little sense in the face of increasing U.S. crude production. The $1.5 billion tax impairment charge was difficult to swallow, but it shows that Suncor is willing to endure short-term pain for long-term gain. It has been leaving non-core markets like conventional natural gas in an effort to reposition the company.

By focusing on its Fort Hills project Suncor is laying ground for strong growth into the 2020s and beyond.

The other players
Canadian Natural Resources (CNQ 0.32%) is a big oil sands producer with an estimated heavy oil production of 142 mbpd to 146 mbpd in 2014. The company also runs offshore operations in the North Sea and Africa.

Canadian Natural Resources is hard at work bringing more thermal in-situ assets online. Its Kirby South project is expected to produce 40 mbpd by Q4 2014. The advantage of this technology is that it lets the company extract oil without digging up the top soil. Even though Canadian Natural Resources has a realized oil price well below WTI, it still makes a profit thanks to its netback being 68% of its realized oil price.

Its dividend yield of 2.3% is not enormous, but the company hopes to expand its dividend payments 66% between 2013 and 2014. The other great news for investors is that the company is pushing to diversify its income with more synthetic oil.

If you are looking for an environmentally friendly piece of the oil sands then Cenovus Energy (CVE 1.48%) is your pick. It owns 50% of the Cristina Lake and Foster Creek in-situ operations. ConocoPhillips (COP -0.71%) owns the other half. In 2013 Cristina Lake is expected to see a steam-to-oil ratio (SOR) of 1.9 and Foster Creek is expecting a SOR of 2.4. This means that for every barrel of oil produced only 2.4 or 1.9 barrels of steam is required. Considering that Suncor's Firebag facility posted a SOR of 3.3 in 2013, the Cenovus-ConocoPhillips operation is running very efficiently.

One risk factor to consider is Cenovus' refinery operations. It has a 50% interest in two U.S. refineries with Phillips 66. Thanks to falling crack spreads and higher heavy oil feedstock prices its Q3 2013 refinery profits fell 75% relative to Q3 2012. While the expansion of North America's midstream infrastructure helps Cenovus as a producer, it is putting pricing pressure on the refinery industry.

The downside to investing with Cenovus is that its refinery interests have helped to push its profit margin down to 3.2%. By investing in ConocoPhillips you can get a piece of Cenovus' growing production, ConocoPhillips's fatter 14.2% profit margin, its Eagle Ford assets, and its Bakken assets without any of Phillips 66's refinery challenges.

The Canadian oil discount
Getting international pipelines approved is a royal pain, but building a pipeline within a single nation is much easier. Right now one of TransCanada's newest pipelines from Oklahoma to Texas is helping to push up Western Canadian Select crude and boost oil sands producers' income. While the Keystone XL is still in limbo, there are number of alternative pipelines within Canada's borders that are already waiting for approval. Combined with rail assets Canada's oil will eventually get to market.

Look for the best
Suncor is one of the top Canadian energy companies. It has a yield of 2.4%, continues to optimize its capex budget, and produces ample free cash flow. Its existing upgraders help to maintain its profit margin even when WCS falls. Cenovus runs some of the most efficient in-situ operations with small amounts of steam, but its Phillips 66 refinery assets can put big pressure on its overall earnings. If you invest in ConocoPhillips then you can get a piece of Cenovus' growth along with ConocoPhillips' big unconventional U.S. plays and its 4.2% yield.