Learn why the market is punishing Amazon.com, after the company warned investors of a possible loss, despite forecasting more than $18 billion in sales for the present quarter.

Shares of e-commerce giant Amazon.com (AMZN 3.53%) are down more than 10% after the company presented its financial results for the fourth quarter of 2013 on Jan. 30. Although sales volume increased 20% to almost $25.6 billion, up from $21.3 billion last year, the company warned of a possible loss in the current quarter, causing a sell-off. With far less revenue, competitor eBay (EBAY 1.04%) is much more profitable, enjoying a 69% gross margin in the past twelve months.

That being said, investors are accustomed to Amazon's weak profitability because the company is well-known on the Street for reinvesting most of its revenue on data centers, technology, advertising, and low pricing strategies. In exchange, Amazon provides amazing sales growth, usually beating the street consensus by a wide margin. However, this time the company forecasted sales for the first quarter in the range of $18.2 billion-$19.9 billion, while analysts were expecting $19.67 billion on average. Can Amazon still be considered a great growth play? 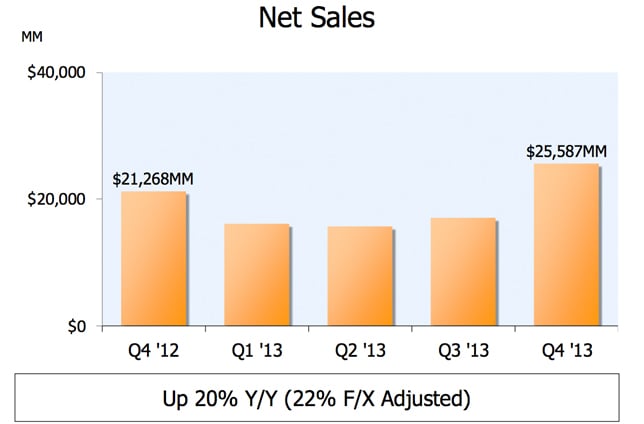 Explaining the earnings call
For the first quarter of 2014, Amazon is expecting revenue of $18.2 billion-$19.9 billion. This is equivalent to a growth rate of 13%-24% from the year before, which is well below the growth rate experienced by Amazon in the third quarter of 2013, when the company saw its top line increase by 25%, which helped raise the market's expectations.

It's important to consider that Amazon is traditionally conservative when it comes to guidance. For example, the company forecasted fourth-quarter revenue in the range of $23.5 billion-$26.5 billion, while real revenue came in at $25.6 billion.

The slowdown is real
However, even after considering the fact that Amazon's management is soft when it comes to guidance, we can observe a strong decline in revenue growth rates in Amazon's top line. For example, the company experienced amazing growth rates of roughly 40% in 2010 and 2011. But, in 2012, it only saw its top line increase by 27%.

A growth rate in the mid-20s is quite healthy. However, this may not be enough for a company like Amazon, which trades at nearly 580 times earnings. Amazon's valuation is only based on growth prospects, and any worries related to a possible revenue slowdown are bound to have a severe negative effect on share performance.

The key to the growth puzzle lies in International markets
Notice that Amazon's international revenue is quite related to the company's top line growth slow down. In the latest quarter, Amazon saw international revenue increase by only 13%, while its North American business saw a 26% rate. Notice U.S. revenue matters less to eBay, as last year more than half of eBay's $14 billion revenue came from non-U.S. countries.

eBay's marketplace is ranked second in India and has meaningful market share in Kenya, Nigeria, and the Philippines. It seems that the auction site has more competitive advantages than Amazon in certain key emerging markets, as eBay's business model is based on providing an efficient, mobile platform for third-party sellers, rather than directly fulfilling orders. This allows eBay to quickly set up online stores in new markets, as it does not require investments in warehouses or inventory.

A shift to earnings is needed
To continue delivering high value to its shareholders, Amazon has several choices. The online retailer can enter new markets in an attempt to increase revenue growth. The company has done this successfully in the past, as it created one of the most efficient cloud server farms, Amazon Web Services. According to Citigroup, it took Amazon Web Services eight years to hit $650 million in revenue. But just three years later, the business unit saw a massive improvement in top-line performance and could see more than $3.8 billion in 2013 revenue.

Amazon can also start giving more importance to earnings. So far, the company's main focus has been growth. To grow as fast as possible, the company captured market share from competitors using an aggressive pricing strategy. This has allowed Amazon to outperform most rivals in the e-commerce, cloud, and video streaming space. But, earnings remain too low for a company with almost $75 billion in annual revenue.

Final Foolish takeaway
Amazon's share price plummeted after the company reported below-expectation results for the last quarter of 2013. Investors worry about a possible loss for the first quarter of 2014. However, the biggest concern here is that Amazon's amazing growth story may be over.

Luckily, Amazon still has plenty of ways to continue delivering high value to shareholders. Taking its revenue growth rate back to the mid-30s may be close to impossible, but the company can still grow at healthy rates for many more years by entering new markets. More importantly, the company can start improving profitability by introducing gradual changes in pricing.