One of the most important tasks for an integrated oil and gas company is exploring for new resources. This is because the oil and gas industry is by definition an extractive industry. The deposits from which a company extracts oil and gas only contain a finite quantity of the resources.

About Statoil
Statoil is a large, vertically integrated oil and gas company that was established in the early 1970s by the Norwegian government to develop the enormous deposits of oil and gas that are located in the North Sea and on the Norwegian Continental Shelf. The company was quite successful at this, and today Norway is one of the largest energy exporters in the world. For many years, the company focused its production activities in Norway. However, a few years ago, the company began expanding its activities internationally in response to the maturation of its traditional areas and the resultant production declines.

The company's focus on Norway was one of its biggest problems for years as it struggled to replace the resources that it extracted from the ground. The company regularly reported reserve replacement ratios of under 100%. However, the company has managed to reverse this trend, primarily through the expansion of its international presence.

Statoil continued the trend in exploration last year, discovering more oil and gas than any other company.  As in 2012, a significant amount of discoveries were located outside of Norway. However, a surprising quantity of oil and gas was discovered inside the country's borders, which indicates that perhaps Norway's resources are not as tapped out as experts once thought.

Tanzania gas discovery
One of the company's most important discoveries during 2013 was the discovery of 4-6 trillion cubic feet of natural gas in place off of the shore of Tanzania. This discovery was made at the Tangawizi site, which is relatively close to two other major discoveries. 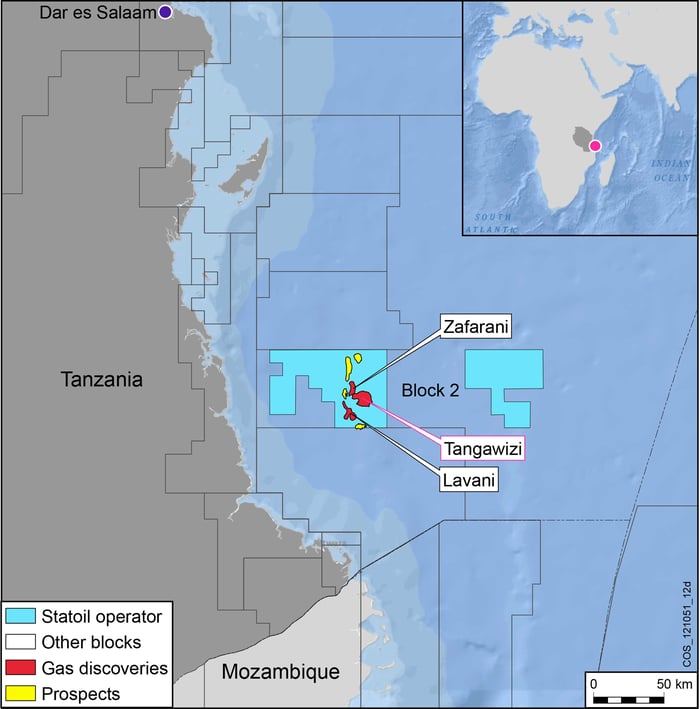 One of the biggest opportunities for Statoil going forward may be found at this site and others in Tanzania. This is because the resources are geographically located in an area that will allow Statoil to easily transport natural gas to Asia. As Asian countries are expected to dramatically increase their consumption of natural gas going forward, the potential of becoming a major supplier of gas to Asia is obviously a huge opportunity.

Skavl oil discovery
On December 9, Statoil announced the discovery of a large oil and gas field near the Johan Castberg field in the Barents Sea. This discovery, known as Skavl, is estimated to contain from 20 million to 50 million barrels of recoverable oil. This discovery serves to improve the economics of the Johan Castberg area as it increases the amount of recoverable oil that the company can extract from the area to defray the costs of developing the area.

Johan Castberg is estimated to contain from 400 million to 600 million barrels of recoverable oil. This region and its development could prove to be very important for Statoil over the long term, and it will likely play an important role in the company's long-term growth. Statoil is in the process of developing this Arctic deposit, a process which will take until 2020. In addition to taking several years, the development of this region will cost an enormous amount of money. The discovery of the Skavl field has increased the amount of oil that Statoil can recover from the Johan Castberg area and has thus improved the economics of developing it.

Poised for continued success
Statoil is on track to continue its exploration success in 2014. On January 2, the company announced the discovery of 19 million-44 million barrels of recoverable oil equivalent at the Askja prospect in the North Sea off of the Norwegian coast. This discovery is also a relatively big deal for Statoil as it shows that there is still the potential for new finds even in the most mature areas of the company's historic base. Although this discovery was smaller than Johan Castberg, it is located in an area in which the company has already developed the necessary infrastructure. Therefore, developing this field will be more economical than it would be otherwise.