Please ensure Javascript is enabled for purposes of website accessibility
Log In Help Join The Motley Fool
Free Article Join Over 1 Million Premium Members And Get More In-Depth Stock Guidance and Research
By Justin Loiseau - Feb 5, 2014 at 11:03AM

Manufacturing was the only industry to record a decrease.

The human capital management company partners with Moody's Analytics to produce this monthly report based on ADP payroll data representing 416,000 U.S. clients that employ nearly 24 million workers in the nation. This is private businesses only.

After rising a revised 227,000 jobs for December, analysts had expected January's numbers to slow down to an adjusted 170,000 jobs. Private payrolls have been on the rise since early 2010, but month-to-month changes continue to be somewhat volatile. The 175,000 jobs is consistent with average monthly growth in 2013, according to ADP President and CEO Carlos Rodriguez. 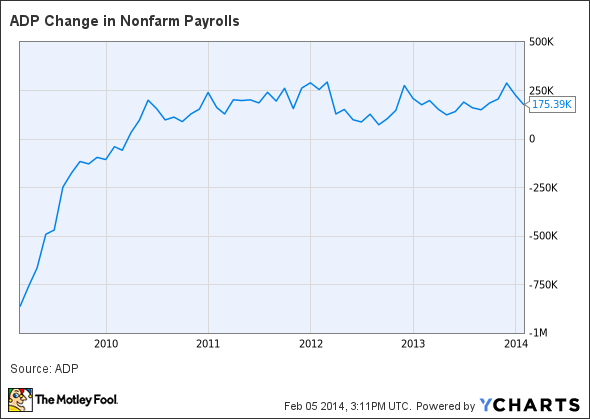 While this month's report squeaked ahead of analyst estimates, gains were uneven across sectors and industries. The services sector soared with 160,000 additions, whiles goods-producing companies barely budged with 16,000 more employed. Manufacturing was the only industry to record a decrease, down 12,000. Construction added 25,000 jobs, while trade/transportation/utilities added 30,000.

According to a statement from Moody's Analytics Chief Economist Mark Zandi, bad weather may have been a factor in January's jobs report:

Cold and stormy winter weather continued to weigh on the job numbers. Underlying job growth, abstracting from the weather, remains sturdy. Gains are broad based across industries and company sizes, the biggest exception being manufacturing, which shed jobs, but that is not expected to continue.