Thanks to a new indication for treating pancreatic cancer, Celgene's (CELG) Abraxane may be poised to reach blockbuster status this year

Blockbuster status -- the gold medal term awarded to therapies racking up sales of more than $1 billion per year -- is still a major goal for drug developers. Arguably, it's the chance to discover blockbusters that fuel R&D spending and offsets the loss of billions spent working on drugs that never make it to the market.

However, knowing which drugs will become blockbusters isn't easy. Industry watchers often predict big bucks for compounds in development that fail to live up to expectations. So, instead of guessing which clinical drugs might end up becoming the next big winner, in this article series I look at recently approved drugs already ramping up sales that could be on their way to blockbuster levels in 2014.

In a previous article, I covered Gilead's hepatitis C drug Sovaldi, a highly anticipated drug that won approval in December. This time we take at a look at Celgene's (CELG) Abraxane, a cancer compound already approved as a treatment for breast, lung, and pancreatic cancers. Thanks to Abraxane's label expansion and international launches, Celgene shares hit new highs this past year. However, shares have slid recently on worries payers could balk at Abraxane's $6,000 to $8,000 per month price tag. 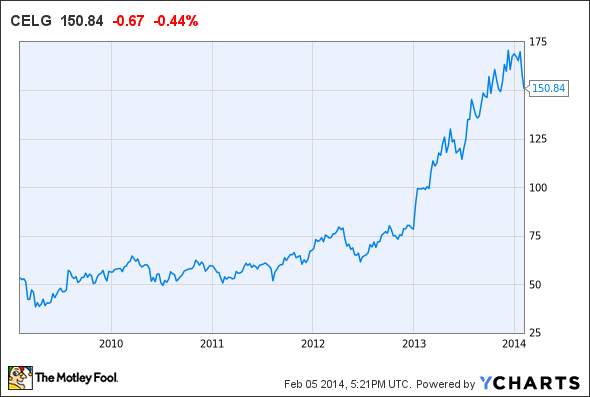 That approval marked the first significant new pancreatic cancer treatment in almost eight years, offering new hope to the 45,000 patients diagnosed annually with pancreatic cancer in the United States, and kicking off a burst of sales growth in the fourth quarter.

The use of Abraxane alongside gemcitabine, sold as Gemzar by Lilly prior to patent expiration, improved overall survival to 8.5 months, versus 6.7 months on gemcitabine alone. Overall response was better in the Abraxane plus gemcitabine arm too, reading out at 23% versus 7% for gemcitabine. Since gemcitabine remains the go-to standard of care, Abraxane is quickly capturing share as doctors embrace the dual-treatment approach.

Sales of Abraxane surged 90% in the past year to $202 million in the fourth quarter, up handsomely from the $170 million in sales registered in Q3 prior to the label expansion. The drug's growth was spread pretty evenly between the U.S. and international markets, where Abraxane has more recently been launching.

However, it may not be all clear skies ahead.  A recent letter published in the New England Journal of Medicine by doctors at the highly regarded Memorial Sloan-Kettering Cancer Center appears to question Abraxane's cost relative to its efficacy.

That letter prompted a response from the author's of a prior NEJM article entitled "Increased Survival in Pancreatic Cancer with nab-Paclitaxel plus Gemcitabine," attempting to justify Abraxane in light of the absence of other new therapies.  If the big unmet need trumps payer push back, Abraxane's sales could march notably higher given Gemzar's annnual sales were around $1.7 billion back in 2008.

Abraxane is also succeeding against Lilly's Alimta in the lung cancer indication, for which Abraxane won approval in October 2012. Lilly previously failed to demonstrate an improvement in overall survival when Alimta was combined with Avastin, Roche's mega blockbuster drug that generated nearly $7 billion in sales last year, versus the earlier version of paclitaxel plus Avastin. That may have supported Abraxane's sales for the indication given Abraxane's sales grew from $106 million in the fourth quarter of 2012 to $155 million in Q2, 2013, up 60% year-over-year, following its non-small cell lung cancer approval.

Fool-worthy final thoughts
Abraxane's strong push into 2014 brought its full year sales to $649 million. That means sales would need to climb another 50% this year to reach blockbuster levels. However, the path isn't nearly that difficult given the pancreatic cancer indication lifted Abraxane's sales to over an $800 million annual run rate in Q4.

Abraxane may also see sales benefit as more doctors gain confidence in Abraxane, especially overseas where Abraxane's sales grew more than 90% to just $43 million last year. A filing for the pancreatic cancer indication in Europe, for example, is still pending, suggesting a nod from the European Commission could have a significant positive impact in 2014. Celgene is also awaiting the drug's approval as a treatment for metastatic gastric cancer in Japan. Looking further ahead, Celgene is studying Abraxane as a first line breast cancer treatment, and as a treatment for melanoma, both of which could support additional sales growth down the line.

5 Growth Stocks That Can Deliver Transformational Wealth (With Patience)