3D Systems' latest guidance shows a company that can't maintain its profit edge, but this is a problem the entire industry has to deal with.

Raise your hand if you'd invest in a company that's growing like a weed, even if it's only growing the top line. Would you hold on even if that company had no easy path toward a long-term profit explosion?

Put your hands down, Amazon investors... you don't count.

Anyone else? Not too many people. That makes sense, doesn't it? We don't invest in nonprofits when we buy stocks. Without earnings, a company has nothing to return to shareholders, and nothing to reinvest in its business. Revenue growth is great, but margins matter. A company that makes a billion widgets, but can't turn a profit, will eventually lose out to the company that can figure out how to scale up widget-making profitably.

Investors are finally coming to understand that about 3-D printing stocks, which is why 2014 has been such a horrible year for Stratasys (SSYS -1.33%) and 3D Systems (DDD -2.63%). Both stocks have slipped significantly today after the latter warned that it would not manage to grow its earnings at all in 2014, a warning made worse by the fact that 3D Systems had to downgrade its own earnings guidance for 2013. This wasn't even the first such slip -- Stratasys also warned of weaker earnings in 2014 several weeks ago, precipitating another sectorwide drop.

Revenue is nice, but margins matter. Where are they in the 3-D printing industry? Right now, they're low, and going lower: 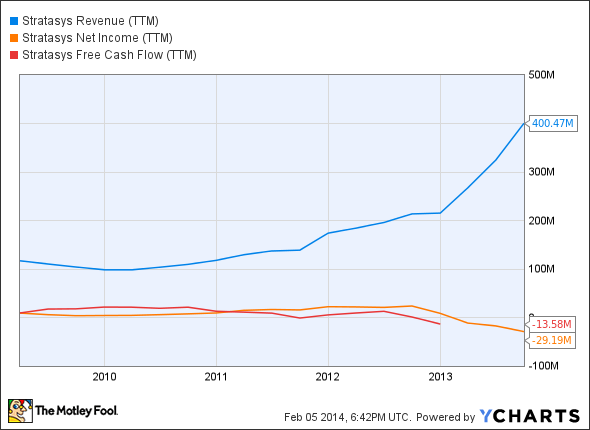 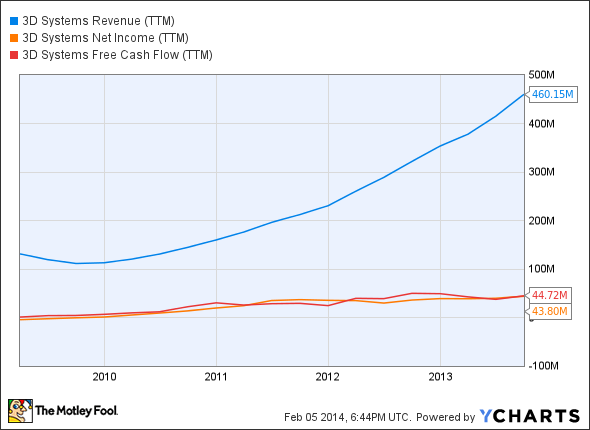 Keep in mind that these are GAAP results and, as free cash flow has not been moving ahead of earnings per share, it's hard to argue that real profits are substantially better than the adjusted figures. Smaller 3-D printing companies tend to do worse on the bottom line. ExOne (XONE) has yet to post an annual profit in its life as a public company, although it's getting closer. Tiny voxeljet (VJET -1.73%) has no profit to speak of, but its market cap is still 39 times its annual sales. Here's a quick look at how these companies are valued today, and what it might take for their valuations to look a little bit more sustainable:

Is your nose bleeding yet from these sky-high valuations? But some companies should be overpriced, because their growth rate is so monstrous that they'll soon blow us all away with huge earnings. Let's assume that the present market caps of these four companies stay the same, but revenue and earnings continue to grow. How much would it take for them to get to more sensible valuations -- which we'll define here as P/E ratios of 40, and P/S ratios of four, for a reasonable net margin of 10%?

Author's calculations assume same market cap with P/E ratio of 40 and P/S ratio of four.
* Revenue and earnings from most recent trailing-12-month data, via Morningstar.

For 2013, 3D Systems anticipates an adjusted profit margin of roughly 17%, which is lower than last year's, and it expects an adjusted profit margin of just 11.6% for 2014. Given the company's increasingly divergent adjusted and GAAP earnings, the final results could look significantly worse. This is the best 3-D printing company you can buy today, the only one that's been consistently profitable during the past few years, and its margins are undeniably shrinking. If scale and market leadership can't give 3D Systems the pricing power it needs to maintain its margins, is there really any hope for the other 3-D printing companies?

This may just be the tip of the iceberg for 3-D printing profitability. The industry has been highly insulated from real competition for years thanks to a bevy of patents protecting its core technologies; but that protection is about to fall apart. The earliest patents that expired were those for fused deposition modeling, and we can see the outcome of those expirations in the wide range of low-cost consumer 3-D printers available today. By the middle of next year, a number of laser sintering and stereolithography patents will have expired.

These two 3-D printing methods are much more precise and more advanced than those now churning out little plastic gewgaws in thousands of cheap desktop machines around the world. History has shown that when competition is allowed to proliferate in hardware manufacturing, profit margins are quickly pushed to the floor. All it takes is the full investment of a major industrial concern, and 3D Systems, Stratasys, and their smaller compatriots may find it nigh-impossible to maintain even the illusion of profitability afforded by adjusted earnings.

Margins matter, and the 3-D printing industry is neither growing quickly enough, nor keeping costs contained enough, to justify even its post-drop nosebleed valuations. Competition is coming, and it won't be kind to your favorite 3-D printing stocks.