Gilead's (GILD) may hit blockbuster $1 billion a year status in its first year on the market.

Blockbuster status -- the gold medal term awarded to therapies racking up sales of more than $1 billion per year -- is the Holy Grail for drug developers. Arguably, it's the chance to discover blockbusters that fuels industry R&D spend and offsets the loss of billions spent working on drugs that end up on the cutting room floor.

However, knowing which drugs will become blockbusters isn't easy. Industry watchers often predict big bucks for compounds in development that fail to live up to expectations. So, instead of guessing which clinical drugs might end up becoming the next big winner, in this article series I look at recently approved drugs already notching big time sales that are on their way to blockbuster levels in 2014.

First up is Gilead's (GILD 0.59%) hepatitis C drug Sovaldi, a highly anticipated drug that won approval in December and stands a very good chance of hitting blockbuster levels in its first full year of sales. Despite potential competition from Johnson & Johnson (JNJ -0.56%), AbbVie (ABBV -0.68%) and Bristol-Myers Squib (BMY -0.20%), investor optimism has pushed Gilead's shares to all time highs over the past year. 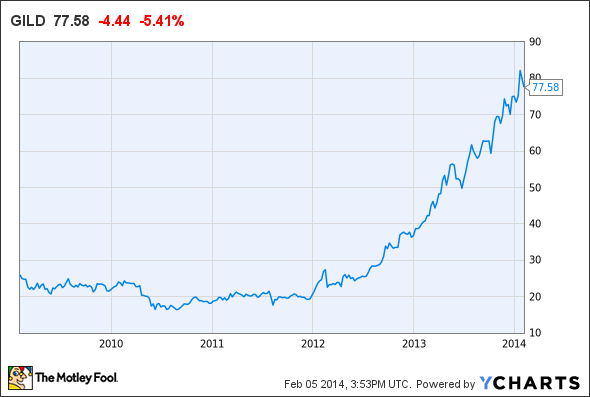 Addressing a big and growing need
Gilead spent more than $11 billion buying Pharmasset in 2011 to get its hands on Sovaldi, and now that Sovaldi has won FDA approval, Gilead will find out if that was money well spent.

Market leadership could mean billions in sales for Gilead over the coming years given spending on hepatitis C drugs is expected to climb from $3 billion annually in 2011 to more than $20 billion in 2018, according to Decision Resources Group, LLC. That spending jump will be driven not only by the size of the market -- there are 170 million infected with hepatitis C worldwide -- but also because of pricing. At $84,000 for a 12 week course of treatment, Sovaldi is far more expensive than the $66,000 charged for prior generation treatments.

Although there's been pushback against Gilead on pricing, there remains a significant need for new, more effective treatments and, while payers may be reluctant to pay for Sovaldi, it is unlikely they'll avoid it given that it is still more expensive to treat liver failure than prescribe the treatment.

Paving the path to a blockbuster
Sovaldi put up impressive results in trials, arguably outperforming its closest competitior -- Johnson's Olysio, which won FDA approval last November. Sovaldi cleared hepatitis C in 89% of patients with genotype 1 versus 84% treated with Olysio during their respective phase 3 trials. Importantly, Olysio stumbled in treating patients with the Q80K polymorphism, a frequent polymorphic variant found in up to 50% of those with genotype 1.

In fact, expectations for oral Sovaldi have been so high that doctors in the U.S. chose to warehouse patients rather than treat them with Vertex's injectible Incivek -- a drug that quickly won blockbuster status in 2011 only to lose it a year later. Given Sovaldi's effectiveness, it is unlikely that doctors will hold off treating those warehoused patients in hope of competitors AbbVie and Bristol garnering the FDA go-ahead.

AbbVie's three drug cocktail remains in development, however, and is arguably less attractive than a potential two drug combination being worked on by Gilead. AbbVie's combination may also be less intriguing than an eventual off-label combination of Bristol's daclatasvir and Sovaldi.

That combination posted nearly a 100% clearance rate in patients during phase two before Gilead walked away from advancing the approach into phase 3 to work on its own combination instead. Bristol hasn't filed for daclatasvir's approval in the U.S., but it has filed for approval in Japan and the EU, suggesting a U.S. application may come soon.

Fool-worthy final thoughts
Sovaldi's strong showing in trials, a significant pent-up demand from warehousing, and its hefty price tag suggests the drug will quickly capture the lion's share of treatment dollars this year. Following its approval on December 6th, distributors bulking up inventory resulted in fourth quarter sales of nearly $140 million for Sovaldi. If Sovaldi maintains that run rate, it will hit blockbuster levels and significantly move the revenue needle for Gilead this year. After all, Gilead didn't include Sovaldi sales in its guidance for $11.3 to $11.5 billion in sales this year, up $10.8 billion in 2013.

These 2 Growth Stocks Have Potential Catalysts on the Way
349%