Big drug makers Pfizer (PFE -2.01%), Bristol-Myers (BMY -0.97%), Johnson & Johnson (JNJ -1.50%), and Bayer (BAYR.Y -0.89%) are always interested in collaborating with emerging biotech companies with promising new therapies. However, their interest in Portola Pharmaceuticals (PTLA) could conceivably have a much more profound effect on their bottom lines.

That's because Portola, a company that has seen its shares leap more than 75% since its IPO last year, is developing an antidote to new anti-coagulant drugs from these big pharma players. Those anti-coagulant drugs are Xarelto by Johnson & Johnson and Bayer, and Eliquis by Pfizer and Bristol-Myers Squibb. 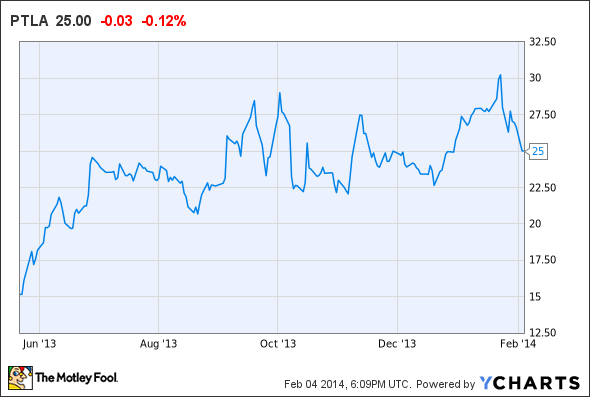 Solving a big problem
For 50 years, warfarin has been a go-to therapy for doctors trying to prevent blood clots from forming in patients following surgery or suffering from heart disease. It's a big market opportunity given that as many as 40%-60% of patients undergoing orthopaedic surgery may develop blood clots; also, atrial fibrillation, a condition for which warfarin is commonly prescribed, is on the rise.

As a result, Boehringer, the maker of Pradaxa -- the market share leader of the new therapies -- is already selling a billion dollars worth of its anticoagulant. Bayer and Johnson's Xarelto sales are also at a billion dollar run rate given sales of the drug reached $271 million in the fourth quarter. Pfizer and Bristol's Eliquis is pulling up the rear, but sales have grown dramatically in the past two quarters from $12 million in Q2 to $71 million in Q4.

Those are some impressive numbers, but there's a major stumbling block holding revenue back. None have an effective counter measure capable of reversing their effect. That's a big hurdle for doctors unwilling to prescribe the drugs to patients at risk for bleeding events. It's also a big problem for treating emergency bleeding in patients that do suffer hemorrhages.

Stepping up with Portola
Bayer, Johnson, Pfizer, and Bristol all realize hundreds of millions more in sales could be captured if an effective antidote can be commercialized. As a result, the companies are funding Portola's late stage clinical trials for the company's Xa factor decoy, a drug designed to counteract the Xa factor inhibiting ability of Xarelto and Eliquis.

Following a successful collaboration in phase 2 and the FDA breakthrough designation for the decoy in November, Bayer and Johnson agreed to sign on for phase 3 trials too. Bristol and Pfizer have inked a similar arrangement for phase 3 and factor Xa inhibiting hopeful Daichi is also working with Portola.

Importantly, all those collaborations were made by big pharma despite Portola holding onto the drug's potential commercialization rights, and despite Portola's advancing its own competing anti-coagulant drug in late stage trials.

Fool-worthy final thoughts
Solving the riddle of reversing the affect of Xarelto and Eliquis substantially improves these drugs' marketability. That's likely to prove even more important given hip replacements, AF, and other conditions where anticoagulants are indicated occur more frequently as we get older.

Portola may see an additional benefit if it can show its antidote works on generic enoxaparin. Sales of enoxaparin, which was formerly sold as the brand drug Lovenox, totaled $320 million in the third quarter of 2013 and enoxaparin's current antidote, Protamine, only reverses a maximum of 60% of its effect.

Portola is a compelling growth story to watch, and some of the world's biggest pharma companies are rooting for its success. However, it's important to remember that this stock's growth ultimately hinges on successful clinical trial data.