Is Chesapeake heading in the right direction? How has the company done compared to Chevron and Exxon.

Chesapeake Energy (CHKA.Q) will release its 2014 outlook at the end of this week and its fourth quarter earnings report by the end of the month. Until these two reports are released, let's examine how the company has done in the fourth quarter compared to leading oil and gas companies such as ExxonMobil (XOM 2.36%) and Chevron (CVX 1.75%), and see how the recent developments in the oil and gas markets may affect the company's revenue in the first quarter of 2014.

Oil
One of Chesapeake's operational goals in 2013 was to increase its oil production. The company's 2013 oil production is estimated to be 41 million barrels -- nearly 30% higher than in 2012. The company's fourth quarter oil production is estimated at 10 million barrels -- 13% higher than in the fourth quarter of 2012. Moreover, the average quarterly price of crude oil was 10.5% higher than in 2012. Therefore, taking into account these two factors, the company's oil revenue rose by nearly 25%, assuming all else equal. During January, however, the average price of oil was $95, which was the same price as in January 2013. Therefore, if the price of oil remains at its current level, it won't positively affect the company's oil related revenue.

Chesapeake's road to redemption
During 2013, Chesapeake took several steps to improve its operational and financial situation. First, the company sold its assets in the Northern Eagle Ford Shale and Haynesville Shale -- assets that mostly produced natural gas. This sale cut down the company's exposure to natural gas and improved its liquidity. Chesapeake also reduced its financial risk by selling Chaparral Energy, a company with a significant amount of debt, even for this industry -- Chaparral's liabilities-to-assets ratio was 0.78. In comparison, Chesapeake's liabilities-to-assets ratio was 0.62, and Exxon's ratio was 0.51. These steps are likely to cut down the company's risk and further improve its standing compared to other oil and gas companies.

Chesapeake has also done well in slowly improving its profitability in recent quarters. The chart below shows Chesapeake's operating profit (excluding goodwill charges) compared to other leasing oil and gas companies such as Exxon and Chevron. 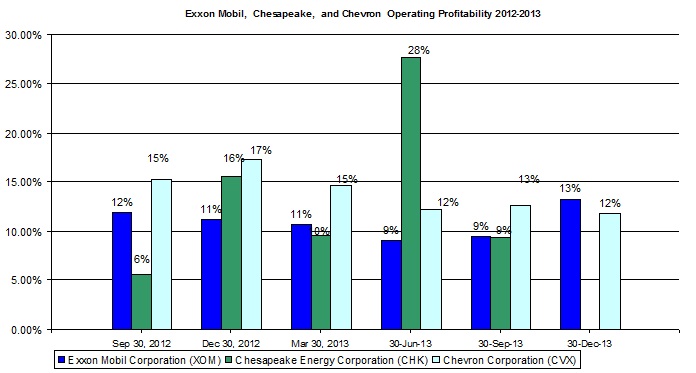 As you can see, Chesapeake's profitability, excluding changes in goodwill, was in line with the profitability of Exxon and Chevron.

Nonetheless, Chesapeake is still behind these companies in terms of dividend payments. Chesapeake's annual dividend yield is only 1.3%. In comparison, Exxon offers more than a 2.8% yield, While Chevron's yield is 3.6%. In the coming quarters, if Chesapeake's management decides to augment its dividend payment, it could draw more investors toward this company.

The bottom line
I think Chesapeake's management has made several changes that reduce the company's risk and may improve its performance in the coming quarters. Finally, the recent developments in the natural gas market could benefit Chesapeake's revenue and profitability in the first quarter.

Lior Cohen has no position in any stocks mentioned. The Motley Fool recommends Chevron. Try any of our Foolish newsletter services free for 30 days. We Fools may not all hold the same opinions, but we all believe that considering a diverse range of insights makes us better investors. The Motley Fool has a disclosure policy.