ADP's monthly jobs report isn't particularly impressive, but neither is it a cause for alarm.

The markets are not happy with this morning's Automatic Data Processing (ADP 0.86%) National Employment Report. The Dow Jones Industrial Average (^DJI 0.03%) reacted to weak data (175,000 jobs were reportedly added by the private sector in January, below the consensus of 185,000 jobs) by dropping quickly into the red on the open, although its reaction has been far less severe than the drop two days ago in response to a weak Institute for Supply Management manufacturing index update. As the numbers became public knowledge, an array of Twitter-savvy economists and business journalists offered their takes:

In light of a slightly softer ADP survey, we're going to nudge our forecast for #nonfarmpayrolls 25k lower to 175k.

ADP report comes in at... Who am I kidding??? No-one cares, and it tells us nothing. So, like, who cares?

There's clearly a lack of consensus as to what ADP's numbers really mean for the economy, but no one appears ready to panic. Many blamed the weakness on the weather, a belief that appears to be validated by the ISM's nonmanufacturing (services) data, which was released later in the morning and specifically called out "intense weather" as a contributing factor to weakness in the wholesale trade sector. That report was quite strong, according to Quartz markets writer Matt Phillips:

What do ADP's numbers actually tell us? Well, let's take a look at charts for both 10-year and three-year employment trends: 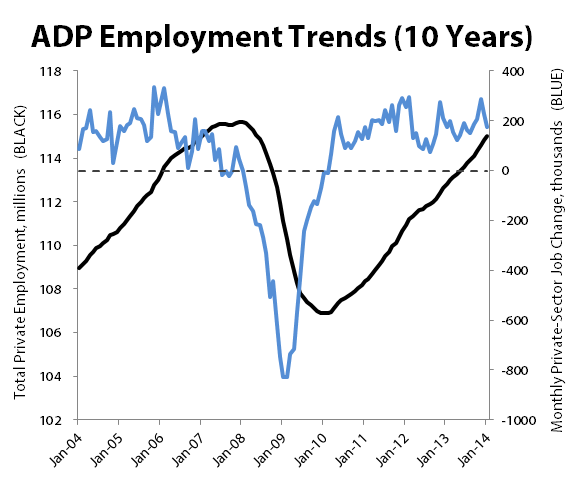 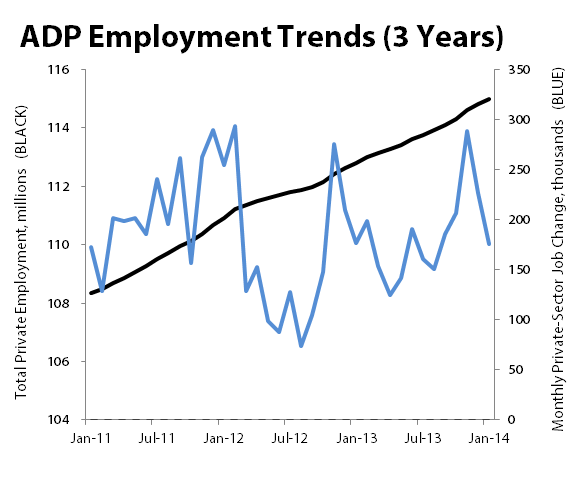 The trend over the past three years appears to show generally stable employment growth, so things have hardly fallen apart. We may not know whether January's weak jobs report can be blamed on bad weather, or if it's part of a broader economic contraction, for another few months. However, things have not been weakening as we saw before the financial crisis, so any comparison to that period doesn't quite hold water today.

What's worrisome is that, almost seven years after the start of the financial crisis, ADP's private payroll numbers still haven't reached the all-time high of 115.7 million workers set in December 2007. We're close -- today's report was the first time ADP reported more than 115 million jobs since mid-2008 -- and a few more months should push the total over the top. Since the American civilian labor force (which includes the unemployed) has grown by 1 million people since that time, we won't be back to even, but we'll be getting pretty close. The Dow had clawed its way back to even by the time this article was completed, so it appears that the market isn't too worried about today's underwhelming numbers.