The Super Bowl is the biggest event on television, but it can also display consumer trends. For instance, almost everyone eats during the Super Bowl. That's part of the fun. However, not many people eat pigs in a blanket and Swedish meatballs anymore. Those days are over.

According to NPD Group, chips were the most popular food item consumed during the Super Bowl -- whether at home or away from home -- between 2008 and 2013. For the same time-frame, chicken wing consumption skyrocketed 350%.

Most popular chip brands are owned by Frito-Lay, so this is a positive for PepsiCo (PEP -0.81%). In fact, PepsiCo is extremely diversified with Gatorade, Tropicana, Quaker, Frito-Lay, Sierra Mist, Pepsi, and Aquafina. Therefore, if you're looking to invest in a diversified company with a strong brand name, resiliency to economic downturns, and a decent dividend yield (2.80%), then PepsiCo should be considered.

As far as pizza goes, its popularity never seems to wane in America. Therefore, you might want to look into Domino's Pizza. However, Yum! Brands would be a safer option since it offers diversification with Pizza Hut, Taco Bell, and Kentucky Fried Chicken.

Considering McDonald's target market -- low to middle-income consumers -- this didn't make much sense. Why would someone go to McDonald's for wings when they could spend roughly the same amount of money for better-quality wings somewhere else? Also, Mighty Wings were too spicy for many consumers. McDonald's ended up with 10 million pounds of Mighty Wings in frozen storage. Needless to say, McDonald's isn't the best way to profit off the rise in popularity of chicken wings.

A better option would be Buffalo Wild Wings (BWLD). I had been trying to lead readers toward Buffalo Wild Wings since it traded at $104 per share, and it's now trading at $141 per share. This might make it seem as though "you missed it," but Foolish investors look at the long-term prospects for a company. With that in mind, consider management's effectiveness over the past five years, consistently delivering top-line growth that outperforms SG&A expenses: 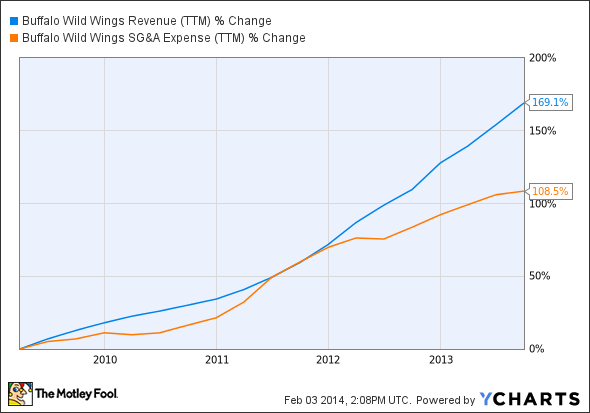 This signals effective management. Of course, the rampant top-line growth signals continuous high demand. Buffalo Wild Wings is trading at 40 times earnings, which makes it somewhat expensive. There could be some intermittent hits to the stock price, but if a company is well-run and demand is high, then the long-term outlook is good.

The Foolish bottom line
The Super Bowl reflects American culture, and the foods we eat on Super Bowl Sundays indicate food popularity trends in America. Chicken wings have been growing in popularity at a rapid rate since 2008, and many food establishments are attempting to capitalize on this trend. However, Buffalo Wild Wings is doing this much better than its peers. The company is on-trend, and its management is effective. Please do your own research prior to making any investment decisions.