Could the price of oil fall to the low $90's? If so, how could this outcome affect oil refinery companies?

The price of WTI oil has been trading close to the $100 mark in recent months. But the latest developments in the oil market might cut the price of oil down to the low $90's in the near future. Let's examine the recent changes in the oil market and see how they might affect leading refinery companies.

The oil market loosens
According to the U.S. Energy Information Administration, during January refinery inputs declined by 3.2% to reach 15.6 million barrels per day. Conversely, the U.S. oil supply has improved: During the past month, oil imports increased to 7.61 million barrels per day -- a 2.8% gain. Further, oil production inched up by 0.1% Thus, the total supply (comprised of imports and production) increased by 1.4%. This means, in recent weeks there was a rise in supply and a drop in demand. These latest developments suggest the U.S. oil market has loosened in the past several weeks. If this trend persists, it could further cut down the price of oil to reach the low $90's. The oil market in Europe has also loosened in the past month, and the EIA estimates Europe's demand for oil will continue to fall in 2014.

Thus, the looser oil market may have contributed to the decline in the spread between Brent oil and WTI oil. The chart below shows this spread in the past several months. 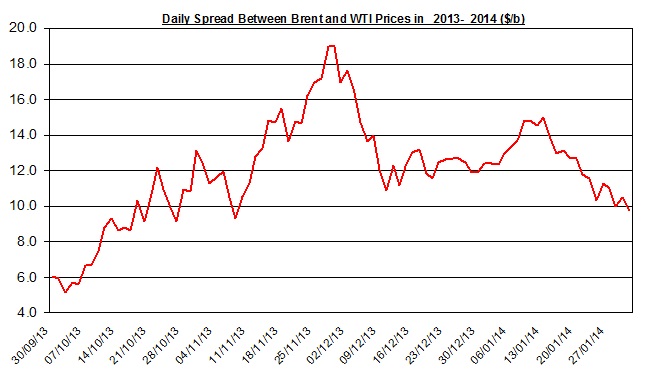 As you can see, the spread between Brent and WTI has declined in the past several months.

Despite the latest fall in the spread, on a yearly scale the EIA estimates the average spread will be $12 a barrel. In comparison, the average annual spread was around $10.8 per barrel in 2013.

The recent developments in the oil market will also affect leading oil refineries such as Valero Energy (VLO -0.58%) and Marathon Petroleum (MPC -0.32%).

Will refinery companies rally?
In the fourth quarter, Valero Energy didn't improve its operations: Its profitability remained stable at around 5.4%. Moreover, the company's revenue inched down by 0.8%, because the rise in throughput volumes was offset by the decline in throughput margins. Looking forward toward the first quarter of 2014, the company could experience a further rise in throughput volumes, but margins are likely to decline. During January 2014, the price of oil was nearly the same to the price of oil in January 2013. If the price of oil remains at its current level, this could suggest oil refineries won't increase their revenues.

Marathon Petroleum, unlike Valero, increased its revenues by 20% during the fourth quarter. Despite the spike in revenue, the company's profitability narrowed from nearly 5.7% to 4%. The jump in revenue can be attributed to the company's increase in refinery throughputs by 27%. However, this higher volume was offset by a 4% decline in refinery margins.

For the first quarter of 2014, however, the recent fall in the gap between Brent and WTI is likely to cut into profitability and revenues. Finally, the recent drop in refinery input, as stated earlier, could also suggest a potential fall in throughput volumes for the above-mentioned companies.

Final thoughts
The latest developments in the oil market might adversely affect refinery companies. The expected drop in oil prices and lower discount on WTI oil over Brent oil could result in a decline in revenues and narrower profit margins for these oil companies. Finally, the oil market may continue to loosen in the coming months on account of higher oil production and stable consumption.