Aging Americans show how they impact the economy.

In 1922, a group of sociologists went to Munice, Indiana, to study how the average American family lived. Almost everyone, they found, was addicted to their car. "We'd rather do without clothes than give up the car," said one mother of nine children. "I'll go without food before I'll see us give up the car," said another. One researcher reminded a housewife that her family had a car but no bathtub. "Why," said she, "you can't go to town in a bathtub!" The automobile was barely two decades old, and Americans already couldn't imagine living without one.

But a change is taking place that is unprecedented since those sociologists' study nearly a century ago: Americans are driving less.

Miles driven per American peaked in 2005, and have since declined 8.8%. This has never happened before. From 1900 to 2007, vehicle miles driven increased every year except 1932, during the Great Depression, according to data from the Department of Transportation. It's now declined in three of the past five years. From 1971 to 2005, miles driven per person increased every year expect 1975. That figure has now declined in each of the last eight years.

You get some staggering numbers when you add this stuff up. If driving habits merely maintained 2005 levels, Americans would have driven 918 billion more miles than they actually did over the last eight years. That's like driving to Mars and back 13,000 times.

Not only is this decline unprecedented, but it was totally unforeseen. In one amusing display of how off the nation's best traffic forecasters (it's an actual job) have been, Eric Sundquist of the State Smart Transportation Initiative showed the Department of Transpiration's recent forecasts of miles driven compared to what actually occurred: 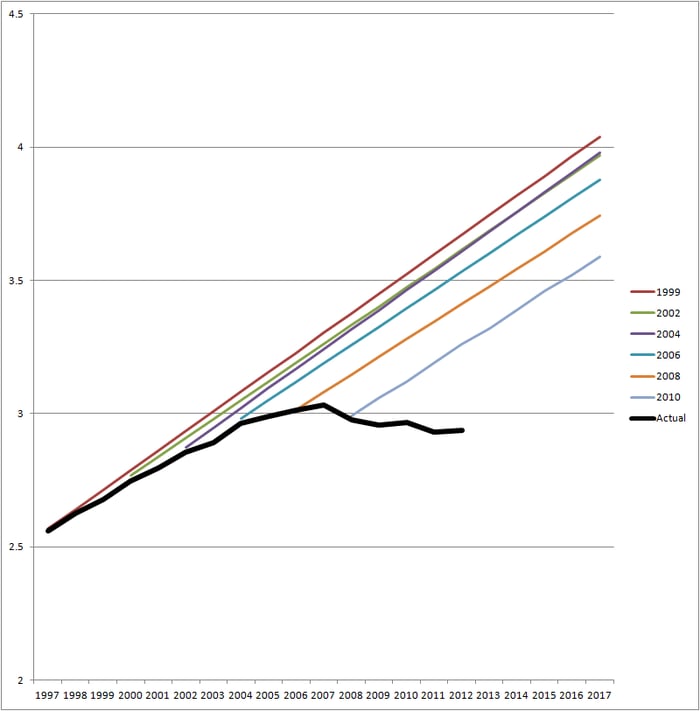 The most shocking thing about this driving decline is that it doesn't seem to be caused by the weak economy.

U.S. PIRG Education Fund crunched the numbers last and year, looking at how Americans driving habits changed broken out by state. It found plenty of states where driving plunged, yet economies and job markets were healthier than the national average, and states whose economies were ravaged by the recession, but where miles driven actually went up. The researchers looked at it every way they could -- the unemployment rate, changes in employment, etc. There was very little link between the economy and the decline in driving. Of the 10 states where employment fell the fastest during the recession, only two were among the top 10 states with the largest decline in driving. On average, the group found "that declining rates of driving do not correspond with how badly states suffered economically in recent years."

Some say higher gas prices have caused drivers to stay home. It's a nice story, but there's not much evidence backing it up. Gas prices are lower today than they were six and a half years ago. And average fuel efficiency has surged over the last decade, putting the real cost of gasoline usage today no higher than it was a decade ago.

The most compelling argument for why driving is in decline is also one of the scariest, because it might not be temporary. It's demographics.

That's a critical difference, because after rising for decades, the number of prime-driving age Americans plunged by 2.8 million over the last eight years as baby boomers age into their 60s. The number of prime-age drivers peaked at the exact time miles driven per capita peaked: 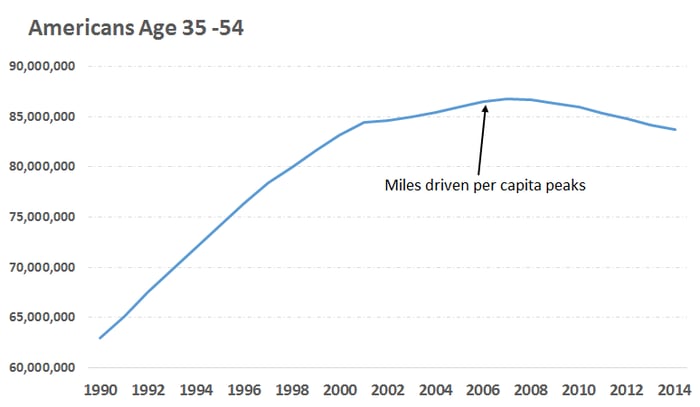 For decades, economists have wondered what will happen to the economy when the baby boomers retire.

Will they spend less money? Will that hurt the economy?

The driving slowdown might be one of our first clear answers.

Things are always more complicated than they seem, and demographics can't explain all of the decline. But it's a big cause, and it'd had a big impact on the economy. Remember, Americans drove 918 billion fewer miles over the last eight years than they would have if 2006 driving trends hadn't changed. If a car has a lifespan of 200,000 miles, that ultimately means demand for vehicles over the last eight years was about half a million cars per year lower than it would have been at old driving rates.

The number of prime-age Americans is about to start growing again, so this trend could ease.

But America is getting older. That's going to make growing the economy over the next 50 years harder than it was over the last 50. "The trick is growing up without growing old," baseball great Casey Stengel once quipped. We'll see if America can.