Americans are working more for better pay, according to a Q4 2013 Productivity and Costs report (link opens in PDF) released today by the Labor Department.

Nonfarm business sector labor productivity increased an annualized 3.2% for 2013's fourth quarter, driven ahead primarily by a 4.9% Q/Q increase in nonfarm output and a 1.7% increase in hours worked. After rising a revised 3.6% in Q3 2013, analysts had expected a more subdued 2.6% improvement.

With significant productivity gains, employers enjoyed lower unit labor costs in Q4. Analysts had expected a 0.7% decline, but actual numbers came in at more than double the savings, down 1.6% Q/Q. But productivity paid off for employees as well, who enjoyed a 1.5% increase in hourly compensation. 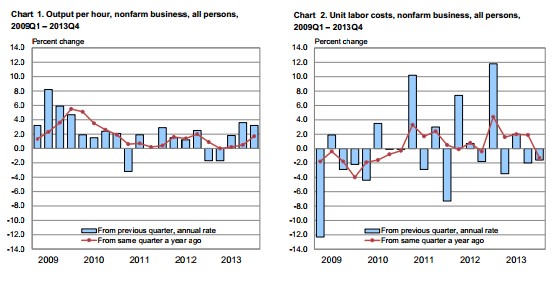 For manufacturing, productivity increased 2.0%, while unit labor costs fell 1.0%. The Wall Street Journal notes that these latest increases in productivity could be part of the reason behind slow job expansion, making employment numbers look less menacing to the economic recovery.