Please ensure Javascript is enabled for purposes of website accessibility
Log In Help Join The Motley Fool
Free Article Join Over 1 Million Premium Members And Get More In-Depth Stock Guidance and Research
By Leo Sun - Feb 6, 2014 at 11:01AM

New technologies from Google, Microsoft, iRobot, and Medtronic could dramatically alter the future of telehealth, or remote health care.

42% of U.S. hospitals are now using telehealth platforms to treat patients remotely, according to a new report published in February's Health Affairs  journal.

The report -- conducted by the Center for Connected Health, University of Michigan, and Brigham and Women's Hospital -- revealed that telehealth adoption was higher in rural areas compared to urban ones. On a state-by-state basis, Alaska topped the list with a 75% adoption rate, while Rhode Island was at the bottom with 0%.

This interesting trend represents a key point of convergence between technology and health care, in which companies like Google (GOOGL -2.49%), Microsoft (MSFT -1.39%), iRobot (IRBT -0.18%), and Medtronic (MDT -0.36%) are taking center stage.

Some people might remember Google Answers, an online knowledge marketplace launched in 2002 but closed (except in Hong Kong) in 2006. The service allowed users to pay money to ask a Google-vetted researcher to answer questions. Accepted answers could cost between $2 to $200, with Google taking a 25% cut of the researcher's payment and an additional $0.50 per question. The client could leave a tip up to $100.

Last November, Google launched the successor to Google Answers, known as Google Helpouts. Instead of using a flat rate per question payment model, Google Helpouts lets experts charge clients per session, per minute, or both. Clients need a Google+ account, payments are made via Google Wallet, and Google takes a 20% cut of the fee.

Helpouts' video question and answer platform can be used for a wide variety of purposes, but improving telehealth is one of Google's top priorities. Google waives its 20% for all health care related questions, and it ensures that all of its video interchanges are HIPAA (Health Insurance Portability and Accountability Act) compliant.

Helpouts has attracted individual physicians and companies such as One Medical, all of whom consider it to be a useful tool in scheduling remote appointments for busy or distant patients. Cloud-connected remote monitoring devices -- such as blood pressure monitors, pacemakers, and glucose monitors -- could eventually be added for real-time physical examinations as well.

Paging Dr. Kinect
Although Microsoft's Kinect is usually recognized as a motion-control peripheral for Xbox 360 and Xbox One video games, Microsoft's joint venture with Accenture, known as Avanade, has transformed the device into an important telehealth tool as well.

Avanade accomplishes this by combining the motion-tracking abilities of the Kinect (which uses cameras to synchronize to the user's body parts), Skype video chat, and Microsoft's HealthVault cloud-based EHR program.

Physicians using the Kinect as a telehealth device can go a step further than Google Helpouts by instructing patients to perform physical movements to gauge flexibility and a range of movement, all of which can be measured by the Kinect's cameras. The Kinect can also use a pre-programmed set of instructions to conduct a preliminary exam without a doctor present, shortening the length of the remote care session. The results are then recorded over the cloud into HealthVault. The whole system can cost less than $1,000, depending on the setup of the PC. Neither Google nor Microsoft generate meaningful revenue from these telehealth projects, but they could catch on quickly, thanks to their massive footprints in the consumer tech market.

The 5-foot tall robot doctor will see you now
iRobot, the company best known for its Roomba vacuum robots, has created the RP-VITA (Remote Presence Virtual and Independent Telemedicine Assistant), a 5-foot tall robot which is equipped with a video screen, webcam, and an onboard stethoscope.

The RP-VITA can navigate hospitals and locate patients independently using a programmed map. The physician then interacts with the patient via an Apple iPad.

The RP-VITA can be used in a wide variety of situations as long as a constant Internet connection is available. For example, the robot could be sent to remote locations lacking adequate medical facilities, or used in quarantined environments too risky for human doctors to enter. So far, robots have only been installed in seven hospitals in the U.S. and Mexico, but at a relatively low cost of $4,000 - $6,000 per month, use could spread over the next decade. Although the RP-VITA isn't a meaningful contributor to iRobot's top line yet, it could eventually represent a way to diversify away from its domestic robots (Roomba, Scooba, Mirra, Looj), which accounted for 89% of its revenue last quarter.

Medtronic's remote monitoring devices could save lives
Medtronic, the largest medical device maker in the world, is also a key name to watch in telehealth. Several of Medtronic's insulin pumps, glucose monitors, and heart devices can transfer patient data over the Internet to a secure server on its CareLink website. In its cardiac devices, Medtronic's OptiVol Fluid Status Monitoring system can detect fluid buildup in the thoracic cavity and send a report to the patient's doctor in a timely manner. 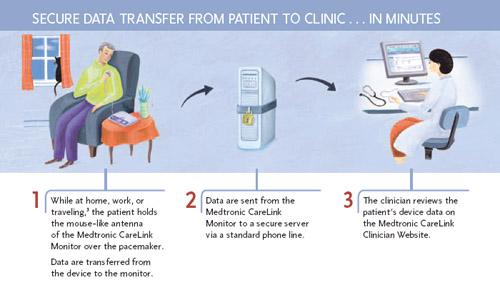 An illustration of how CareLink works. Source: Medtronic.

To accelerate its efforts in telehealth, Medtronic acquired Cardiocom, a maker of remote monitoring devices for heart disease patients, for $200 million in August 2013.

The Foolish takeaway
When we combine these pieces of telehealth technology offered by Google, Microsoft, iRobot, Medtronic, and other companies, the future becomes clear -- more patients in rural areas will have immediate access to quality health care, and visits to the doctor's office could only be a mouse click (or touch of a finger) away.