Exports ease off as imports expand.

The U.S. international trade deficit worsened for December, according to a Commerce Department report (link opens in PDF) released today. That's after hitting a four-year low in November.

While this latest report failed to live up to predictions, November's original report put the U.S. trade deficit at a four-year low.

Deficits improve in two ways: (1) exports increase more than imports, or (2) imports decrease more than exports. The first scenario is generally favored over the second, as it more directly shows signs of an internally strengthening economy. December's results show the exact opposite, where exports dropped off $3.5 billion to $191.3 billion as imports added on $0.6 billion to hit $230.0 billion. 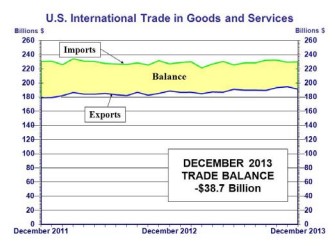 While the services surplus boosted up another $0.4 billion to $20.1 billion, the goods deficit worsened $4.6 billion to $58.8 billion. Exports of industrial supplies and materials dropped off the most ($1.1 billion) as Americans imported $0.7 billion more consumer goods in December.

The U.S. currently enjoys its largest trade surplus for goods with Hong Kong ($3.3 billion), while a $24.5 billion China deficit is $2.5 billion better than November's $26.9 billion reading.

Can a High-Yield Dividend Stock Still Be Safe?

These SaaS Stocks Are Boosting the Nasdaq Tuesday
366%