Coca-Cola and Green Mountain Coffee Roaster's big deal has investors speculating that SodaStream could soon have PepsiCo and Dr. Pepper Snapple knocking its door down for a partnership. The bottom line is SodaStream is just fine on its own.

February 5th's announcement that Coca-Cola (KO 0.88%) and Green Mountain Coffee Roasters (GMCR.DL) were getting together to make Coke products at home, came almost out of the blue. Coke is the undisputed heavyweight of carbonated beverages, with competitor PepsiCo (PEP -0.11%) a distant second in beverage sales. SodaStream (SODA) had been the only player in the home-bubbled soda market, but even with its substantial growth over the past several years, its share of the U.S. and worldwide carbonated beverages business essentially amounts to zero: 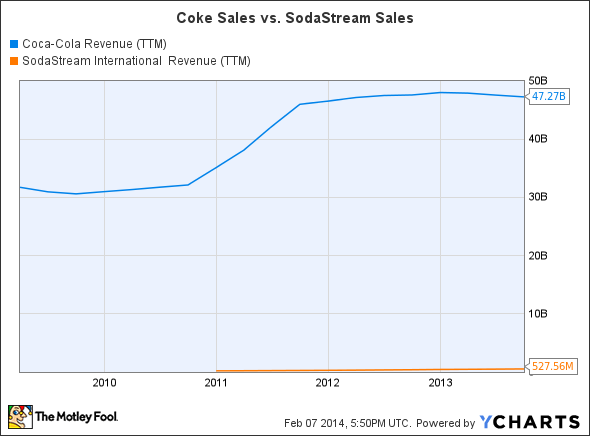 So now that the gorilla has stepped into the ring, what does this mean for investors? Is SodaStream about to go flat? Is it time to jump to Green Mountain, even after seeing the stock climb 35% the past two market days? Let's take a closer look at how this could play out.

Validation
The easy reaction to competition is that it's a bad thing. But that's not always the case. For consumers, competition is absolutely great -- it pushes companies to improve their products, be more innovative, and often leads to better prices. But one thing that is often overlooked, is that in many cases more competition leads to a larger market. For years, local coffee shops feared the eventual arrival of Starbucks in their towns, and putting them out of business; but the interesting thing is there's a tremendous amount of evidence that supports the exact opposite result, where Starbucks' presence in the market actually increased consumer uptake, and many local coffee shops and distributors actually saw their businesses grow.

For SodaStream, there's a very good chance it will experience the same result. After all, much of the company's value proposition has been about, well, value, in addition to the environmental and convenience benefits. One thing you can be sure of is that Coke isn't coming into this market to undercut SodaStream. Its revenues -- especially in the U.S. -- have largely begun to flatten, and as consumption of carbonated beverages has actually started to decline, the company must position itself in the home-bubble market, if nothing else, as a defensive measure to retain its own customers.

Partnerships? We got partnerships
I have been one of those to speculate on SodaStream finding a major partner, but the reality is, PepsiCo probably needs SodaStream more today than SodaStream needs Pepsi. After all, it's not like SodaStream is on its own. Just this year, the company announced an agreement with Welch's, after announcing agreements with Del Monte in November, a partnership with Cooking Light magazine in October for healthier fruit-flavored beverages, Ocean Spray in the spring, and deals to market Kool-Aid and V-8 bubbled beverages 2012. Toss in Scarlett Johansson as its spokesperson, who appeared in the company's second Super Bowl commercial. Below is the version that didn't make it to the big game:

I think it's fair to say that the company has brand awareness.

Most to lose?
PepsiCo, however, is facing the same challenges in its beverages business as Coke, except without Coke's commanding lead in market share with its Coca-Cola and Diet Coke brands. Last quarter, PepsiCo's beverage unit grew 3%, but only 1% of that was organic growth. With Coke stepping into the home beverage market, this could have a negative impact on Pepsi if consumers looking for a branded at-home system start migrating away from Pepsi products. Simply put, the company has zero exposure to what may be a growing market in its core beverage brands in North America, leaving it with more pressure on its slipping market share in its largest market.

Final thoughts: Green Mountain and SodaStream in drivers' seat
Chances are, SodaStream will gain some tailwind from this, as Coca-Cola's entry into the market will likely draw consumer interest, and for both Green Mountain and SodaStream that could mean huge upside -- even with Green Mountain shares being up more than 35% since the announcement. SodaStream's position isn't about being Coca-Cola, so the added exposure probably makes the market grow faster, and sooner, than before Coke's entry. PepsiCo does have a strong snack food business, but it could have the most exposure, and could very well be forced into a partnership with SodaStream, or to even attempt entry on its own.

However, SodaStream has the most to gain. It's the smallest; doesn't have the additional complications of a partner holding a large stake in the business, and frankly, doesn't need a major partner for its strategy to work. With just over $500 million in annual sales, investors should take a closer look.