Is a favourable yen the only factor behind Toyota’s record performance?

Akiyo Toyoda, president of Toyota Motor Corp. (TM 0.55%), must be a happy man – the company not only remains the world's largest carmaker after 2013, but it is also looking to post record profit for fiscal 2014. It is estimated that Toyota's(TM 0.55%) profits are going to be more than the combined profits of General Motors (GM -0.16%) and Volkswagen (VWAGY -1.57%) – the second- and third-biggest carmakers.

To what extent is Toyota's success simply fallout from Japanese monetary policy that weakened the yen against most major global currencies? It's no secret that the currency depreciation helped Toyota and other Japanese exporters gain a competitive edge by lowering prices in international markets, and also book record revenues on overseas sales. So, where does the company stand without the yen effect?

Toyota is fundamentally strong
It's true that currently the lion's share of Toyota's profits come from the effects of that currency devaluation – a weaker yen has contributed no less than 80% toward operating profits over the last three quarters. However, we cannot ignore the fact that the Asian automaker is gaining from higher sales and cost reductions, as well.

Investors should also take heart from the company's steady sales growth. In 2013, Toyota beat rivals GM and Volkswagen to retain the global sales crown. The sales tally stands as follows: 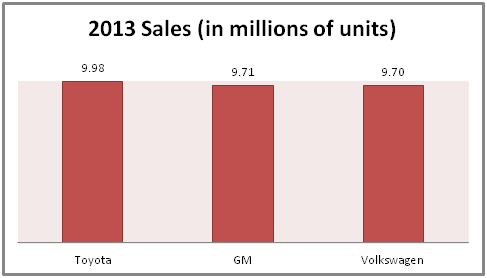 In the last nine months, Toyota has grown its global sales by 2.3% to 6.7 million units. Considering the uncertainties in emerging markets, which account for 45% of Toyota's global sales, this is decent growth. Thailand, in particular, has been a big challenge for the company because of ongoing political unrest and worsening consumer sentiment. Toyota saw its sales in the country fall 14% in 2013. The company also posted a sales decline in Japan – consolidated domestic sales for the last nine months dropped roughly 2% to 1.6 million units.

Toyota was able to compensate these weaknesses with sales growth in established markets like North America and Europe. From April to December, sales increased 5% to 1.97 million units in North America, and 5% to 629,713 units in Europe.

China is a big opportunity
China's industrywide auto sales in 2013 have topped an incredible 22 million units, and yet the per-capita car ownership rates are very low (80 per 1000). So, needless to say, the country has become the hunting ground for automakers across the globe. Toyota is an established player in China with a local production base of roughly 7.5 million units.

However, things have been somewhat topsy-turvy with Toyota suffering badly from the diplomatic tension between China and Japan, which led to a boycott of Japanese goods. In 2012, the automaker experienced its first annual sales decline in the country in a decade, reporting a 4.9% drop.

The situation took a positive turn in September 2013, when the company comfortably crossed its annual target of 900,000 units sold in China, selling 917,500 units. With the anti-Japanese sentiments ebbing, the auto player could see big improvements in sales over the coming quarters. Hence, it's aiming at 20% sales growth in 2014 and hoping to sell no less than 1.1 million cars in the country.

Yet, if we compare Toyota to its competitors, we can see it has a lot more to accomplish. Its rivals have a far better hold of the Chinese market – Volkswagen sold 3.19 million units and GM sold 3.16 million in 2013.

The Japanese auto giant is pioneering the green revolution in different parts of the globe. It recently grabbed headlines by selling more than 6 million hybrid cars since the launch of the revolutionary Prius in 1997. Its futuristic hydrogen-fuel-cell car goes on sale in the U.S. next year.

Toyota has showcased brilliant concept cars like the new FT-1 at the Detroit auto show. Although futuristic, the concept car will have lot of inspirations from the preceding sports models combined with more exciting and effective designs.

The company has also invested in an R&D center in China that would add to the required support in manufacturing hybrid cars, components, and batteries.

Last word
Despite increasing its annual profit forecast, Toyota has maintained global sales expectations at 9.1 million units, reflecting the continuous decline in sales in the Asian market. While the depreciating yen has a role to play, Toyota is doing its bit to stay ahead of the competition. Its focus on green cars, newer models, cutting costs, and marketing efforts will definitely have a bearing on its performance.

ICRA Online has no position in any stocks mentioned. The Motley Fool recommends General Motors. We Fools may not all hold the same opinions, but we all believe that considering a diverse range of insights makes us better investors. The Motley Fool has a disclosure policy.