Please ensure Javascript is enabled for purposes of website accessibility
Log In Help Join The Motley Fool
Free Article Join Over 1 Million Premium Members And Get More In-Depth Stock Guidance and Research
By Alex Planes – Feb 8, 2014 at 11:15AM

Food and drink giant PepsiCo (PEP) has already conquered the world, so its growth has been subdued lately.

Investors love stocks that consistently beat the Street without getting ahead of their fundamentals and risking a meltdown. The best stocks offer sustainable market-beating gains, with robust and improving financial metrics that support strong price growth. Does PepsiCo (PEP -0.74%) fit the bill? Let's look at what its recent results tell us about its potential for future gains.

What we're looking for
The graphs you're about to see tell PepsiCo's story, and we'll be grading the quality of that story in several ways:

What the numbers tell you
Now, let's look at PepsiCo's key statistics: 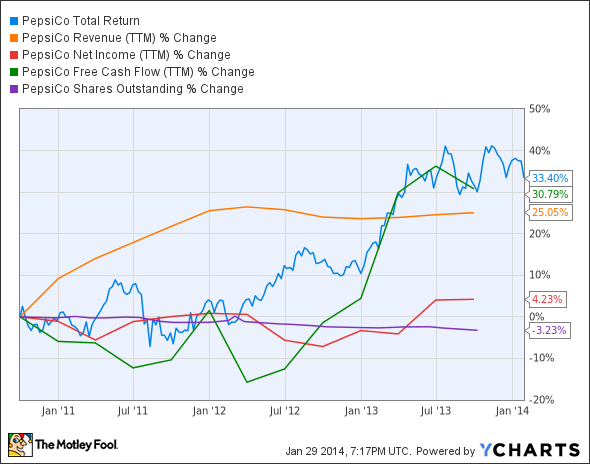 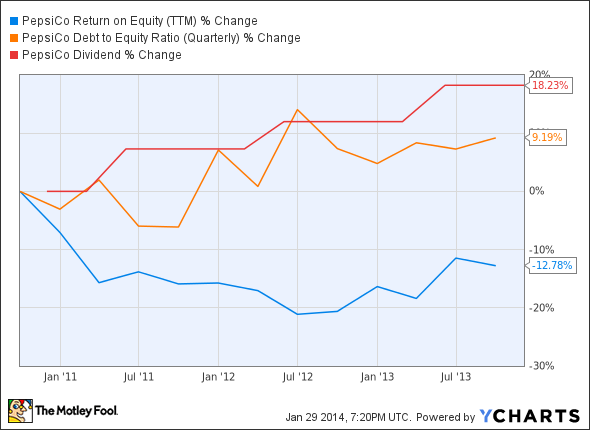 How we got here and where we're going
PepsiCo doesn't put together a very bubbly performance, as it's only mustered three out of nine possible passing grades. Over the past few quarters, PepsiCo's revenue has steadily grown despite widespread economic pressures and weak demand for carbonated beverages, and its profit margins took a haircut due to high discounts and marketing costs. Weaker return on equity, higher debt to equity levels, and subdued dividend growth also resulted in failing grades on this test. Will PepsiCo be able to improve on a middling performance, or is the diversified drinks-and-snacks giant going to be tarnished for some time to come? Let's dig a little deeper to find out.

Consumers have begun expressing greater concerns over the health impact of carbonated soft drinks, but PepsiCo and its peers Coca-Cola (KO -0.02%) and Dr Pepper Snapple have also faced disappointing sales as consumer tastes shift. According to Information Resources, soda sales declined by 0.6% to $28.7 billion last year, and total sales volumes were down almost 1.8%. Fool contributor AnnaLisa Kraft notes that PepsiCo seems to be a better investment than rivals Coca-Cola and Dr Pepper in a tough soft drink environment, as it derives only a quarter of its total sales from soft drinks compared to the 60% and 70% of revenues Coke and Dr Pepper generate from soft drinks.

Tiny rival SodaStream (SODA) has been heavily promoting a "banned" Super Bowl ad called "Sorry, Coke and Pepsi" featured by Scarlett Johansson, which has already drawn more than 2 million views on YouTube. The company recently introduced single serve SodaStream Caps to flavor up carbonated beverages, which have gained traction on the back of the controversial Johansson ad. In response, Coke has actually partnered with Keurig maker Green Mountain Coffee Roasters (GMCR.DL) to produce a cold soda machine with licensed Coke flavors. This leaves PepsiCo a bit stranded in the homemade-soft-drink market, but it could wind up partnering with SodaStream in the end.

Fool contributor William Bias notes that PepsiCo and Coca-Cola's diversified offerings might provide a competitive leg up in international markets, which have not yet seen a decline in soft drink consumption. However, the two soda makers might face some headwinds from Dr Pepper, which has retained the distribution rights for Snapple and other beverages from Mondelez International (MDLZ -0.24%) in Asian-Pacific countries. In addition, Dr Pepper's aggressive geographical expansion has helped it outperform PepsiCo and Coca-Cola on the indexes during out three-year tracking period: 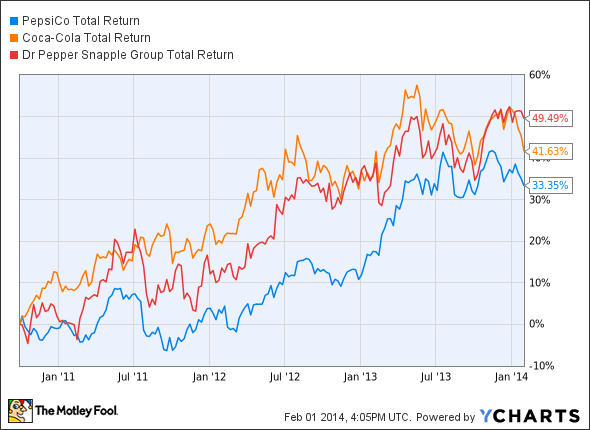 Mondelez recently added activist shareholder and Trian Fund Management CEO Nelson Peltz to its board of directors, which was seen as a move to spur a proposed merger between Pepsi and Mondelez. Nelson Peltz wants PepsiCo to spin off its underperforming beverage division and acquire Mondelez to form a global snack powerhouse, which would certainly dominate the international snack-food industry. However, PepsiCo CEO Indra Nooyi has rejected both ideas, as she holds fast to the idea that snacks and beverages are ideal complements in a corporate brand portfolio.

Putting the pieces together
Today, PepsiCo has some of the qualities that make up a great stock, but no stock is truly perfect. Digging deeper can help you uncover the answers you need to make a great buy -- or to stay away from a stock that's going nowhere.

Alex Planes has no position in any stocks mentioned. The Motley Fool recommends Coca-Cola, Green Mountain Coffee Roasters, PepsiCo, and SodaStream and owns shares of Coca-Cola, PepsiCo, and SodaStream. We Fools don't all hold the same opinions, but we all believe that considering a diverse range of insights makes us better investors. The Motley Fool has a disclosure policy.