If you head to any corporate website, chances are you'll find evidence of their fantastic environmental initiatives. But for those wanting to delve deeper, the EPA has separated fact from fiction, and awarded gold, silver, and bronze to the three Fortune 500 companies using the most renewable energy. Here's how Intel Corporation (INTC -1.41%), Microsoft Corporation (MSFT 0.13%), and Kohl's Corp. (KSS -0.88%) topped the list.

Chip manufacturing takes a load of electricity, and Intel Corporation sources 100% of its demand from renewable sources. At 3,100,850,000 kWh of annual usage, Intel Corporation's consumption is enormous -- but the company's committed to keeping itself clean. The company isn't afraid to get political and makes it clear in its policy that global warming is a real threat:

Intel believes that climate change is a serious economic, social and environmental challenge that warrants an equally serious societal and policy response.

While Intel Corporation keeps its own corporation clean, it's also working hard to advance green options for others. Its eco-friendly processors are industry leaders in energy efficiency, and its applications range from improving offshore wind power productivity to enhancing smart grid capabilities.

Microsoft Corporation's environmental initiatives span the nation, and it relies on a mix of on- and off-site biomass, small-scale hydro, solar, and wind projects to keep business bustling. 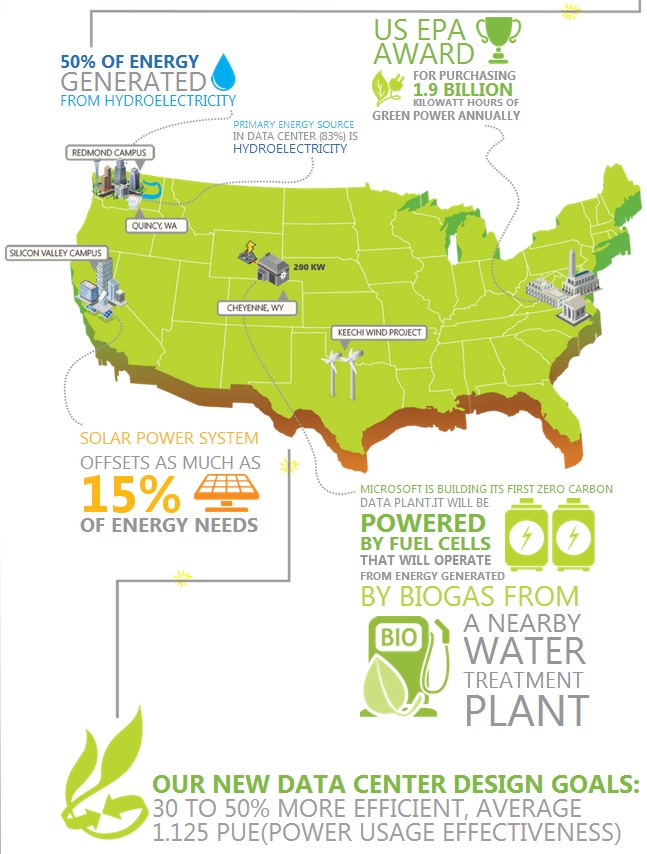 In 2012, Microsoft Corporation announced its intentions to go 100% carbon neutral in fiscal 2013, from data centers to its employee's flights around the world. To help it achieve its goal, the company initiated an innovative "carbon fee," which levies specific tariffs on its individual business segments for their energy use. Ceres, the company responsible for the design of the fee, describe its unique approach:

By disseminating the costs associated with its carbon neutral policy across the organization (based on which divisions are actually responsible for the carbon emissions), Microsoft has created a self-replenishing fund to subsidize green initiatives and offset any residual emissions.

Kohl's Corp. may be known for clean clothes, but certainly not clean energy. Nevertheless, this department store company is the Fortune 500's third-largest renewable energy user. At 1,536,529,000 kWh of annual green power usage, Kohl's Corp. actually produces and purchases more green energy than it needs -- 105% of its total electricity use.

Of Kohl's Corp.'s stores, 148 currently sport solar panel systems, and 801 are Energy Star certified. And by 2015, the company expects to up its solar stores to 200.

A central energy management system keeps an automatic eye on all of Kohl Corp.'s stores, controlling lighting, heating, and cooling nationwide. This has helped it achieve one of the lowest energy usages per square foot of all retail corporations.

But Kohl's Corp. isn't keep all the clean fun to itself. In addition to its solar investments, the company has been running two wind pilot projects since 2011, and its research should help big-box stores everywhere determine how wind power could cut their own carbon consumption.

Go green to make green?
Intel Corporation, Microsoft Corporation, and Kohl's Corp. are the greenest Fortune 500 companies around. But their environmental initiatives make sense. Energy efficiency cuts electricity costs, while renewable energy use makes their products increasingly attractive to environmentally minded consumers. These three companies are Fortune 500 leaders -- and their green goodness could be a secret sign of solid sales to come.

Justin Loiseau has no position in any stocks mentioned. The Motley Fool recommends Intel and owns shares of Intel and Microsoft. We Fools don't all hold the same opinions, but we all believe that considering a diverse range of insights makes us better investors. The Motley Fool has a disclosure policy.