Please ensure Javascript is enabled for purposes of website accessibility
Log In Help Join The Motley Fool
Free Article Join Over 1 Million Premium Members And Get More In-Depth Stock Guidance and Research
By Brandy Betz – Feb 9, 2014 at 8:00AM

Netflix continues its subscriber growth, but should Time Warner Cable and Comcast worry about the competition?

Netflix (NFLX -0.07%) shares have risen over 20% as the company rode a wave of announcements. The fourth-quarter and full-year results were positive and the company soon announced it had raised $400 million through bonds. Netflix then said it planned to spend $3 billion on new content this year while simultaneously revealing the third season renewal of popular original show "House of Cards." That's an impressive list of news items before the second week of February.

But how have membership numbers for Netflix grown over the years? Should Time Warner Cable (NYSE: TWC) and Comcast (CMCSA -0.31%) - the top two cable providers in the country- worry more about the competition?

Subscriber growth
Netflix reported the net addition of over 2.3 million domestic streaming members in the fourth quarter -- 14% year-over-year growth that brought the number of paid subscribers in that segment up to 31.7 million. International streaming had a net addition of 1.7 million members -- a 6% drop from the prior year's quarter, but that's because the fourth quarter of 2012 featured a larger-scale regional launch in Europe.

Domestic DVD members have declined steadily over the past two years. 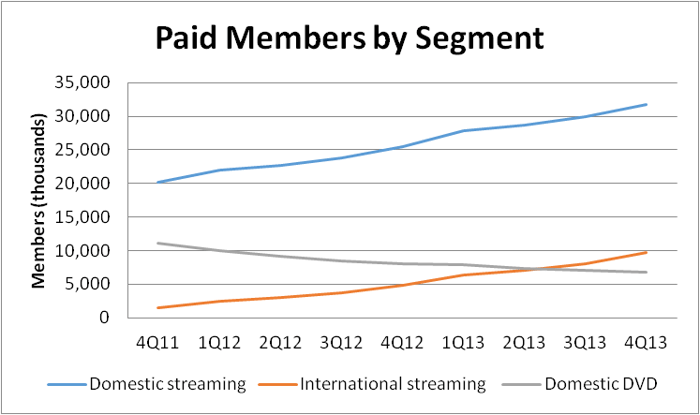 The international segment holds the most growth potential. Netflix remains tight-lipped about performance in specific countries. However, the company has deeply invested in promoting its international presence and that's eating into the segment's contribution margin.

Contribution margin
This metric involves dividing profits by revenues to demonstrate the profitability of each segment for easy comparison. Here's a look at the segment contribution margins over the past two years: 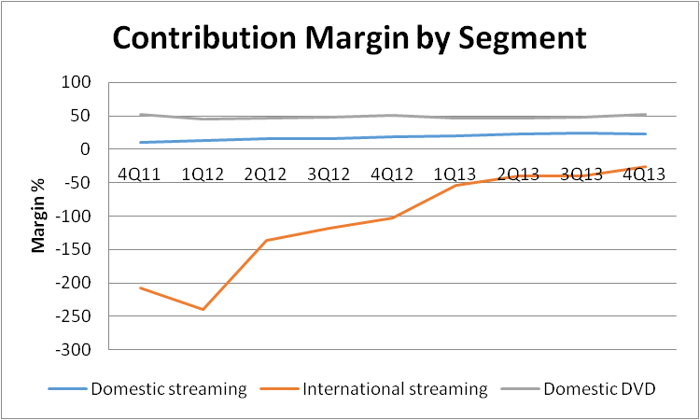 The international segment has improved but its margins will stay low until Netflix has more of an overseas presence. The DVD margin shows why the company keeps the segment around -- its margins remain steady despite the dropping membership numbers.

Comparison to cable
Cable providers such as Time Warner and Comcast have experienced drops in subscribers partly due to the increasing popularity of Netflix's streaming service.

Time Warner Cable's fourth quarter included a net loss of 214,000 video customers, which was an improvement on the previous quarter's number but still the second-highest subscriber loss in the past three years. The drop left Time Warner with about 12 million video subscribers. Comcast fared better by adding 43,000 video subscribers in the fourth quarter but subscriber count was still down 305,000 for the year. The company ended the year with about 22 million video customers.

Here's a look at the net additions-or losses- for the three companies. Note that I use paid subscribers for Netflix to remove subscribers in a free-trial period. 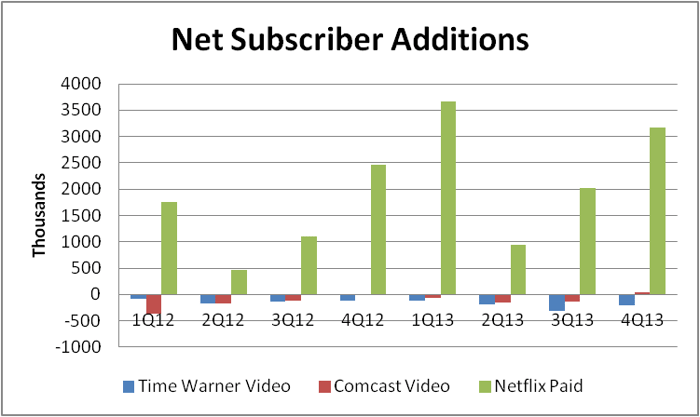 Time Warner Cable and Comcast do have more subscribers than Netflix once the Internet and voice segments are added. But it's important to note that it costs more for the cable companies to lose a customer than it would cost Netflix. Time Warner Cable and Comcast make over $200 in revenue from each video subscriber. Netflix earns about $23 per subscriber. So the subscriber losses for the cable companies can add up to a financial problem quickly.

Netflix won't single-handedly put cable companies out of business. However, as Netflix's original programming improves and the service signs more agreements to stream content, the cable companies will have more cause to worry.

Foolish final thoughts
Netflix has found firm footing in the domestic streaming market, and it still has room to grow as the company continues to add original content. The company now has to focus on greater international penetration to improve the contribution margin of that segment. Expect the DVD service to hang around as long as its margin holds steady.

Brandy Betz has no position in any stocks mentioned. The Motley Fool recommends Netflix. The Motley Fool owns shares of Netflix. We Fools may not all hold the same opinions, but we all believe that considering a diverse range of insights makes us better investors. The Motley Fool has a disclosure policy.