In five years, Tim Armstrong hasn't done a thing to right AOL's slowly sinking ship. Now he wants to blame his own employees for the company's money problems. Really?

Let's get this out of the way right now: AOL's (NYSE: AOL) Tim Armstrong is a terrible CEO.

He was brought on board in the spring of 2009, when the company was still part of Time Warner. He's been at the helm for five years. In that time, AOL has been spun off and its shares have doubled, but on any basic fundamental evaluation -- revenue, earnings, free cash flow -- Armstrong has done terribly: 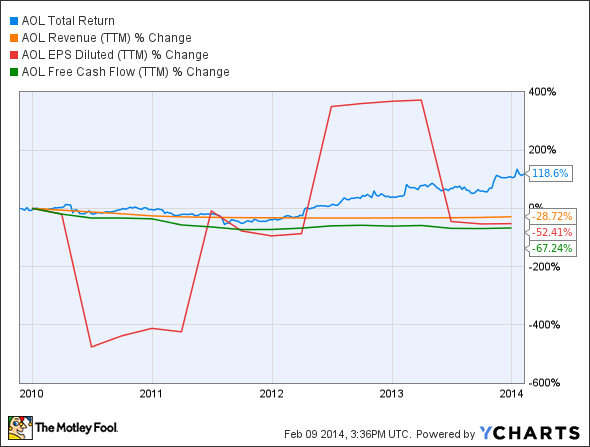 Revenue has fallen almost 30%. Earnings per share have been cut in half. Free cash flow is two-thirds lower today than it was when Armstrong took the company public again.

What has AOL done under Armstrong's leadership? Its three major moves were acquisitions. AOL bought Patch in 2009, TechCrunch in 2010, and Huffington Post in 2011.

Patch -- Armstrong's old company, which he co-founded before joining AOL -- is now essentially gone, as AOL has sold most of it at fire-sale prices after sinking more than $300 million into the absurd notion that most people would really love to read all about the potluck dinner at the local firehouse or the cat that got stuck in a tree in the neighbor's yard. Lesson learned? You can't make money off "hyper-local" journalism, because hyper-local journalism doesn't scale. Also, local news is pretty boring, which is why it doesn't make money in the first place.

TechCrunch was a much smaller acquisition, but it, too, is fading. Its unique visitor count slid by a third from 2011 to 2012 before AOL started propping it up with more direct links. Despite that effort, TechCrunch has suffered ongoing visitor attrition for years -- its latest user numbers are 25% lower than they were a year ago. In the battle for eyeballs among the many tech blogs now online, TechCrunch is losing out. It simply has no killer edge any more.

The same could probably be said of Huffington Post, or HuffPo, which AOL bought in a splashy $315 million acquisition three years ago. At the time, HuffPo was serving up 15 million page views per day, much of which came from content generated by unpaid bloggers. It was also losing money. Today, HuffPo is still serving up about 15 million page views per day (in other words, its numbers have barely changed since mid-2011) and it's still losing money, although AOL now expects HuffPo to turn a profit by the end of this year. The site's unique edge as a major online news source has rapidly eroded as start-ups like Business Insider scale rapidly and established media brands like ESPN and The Washington Post expand into digital news content.

Editor's Note: The Huffington Post's communications personnel have reached out to update us with data from ComScore that show a doubling of that site's daily U.S. page views from March 2011 to December 2011. However, the Quantcast data originally used in this article (linked here) show that the Huffington Post's daily U.S. page views in April-May of 2011 and in January of 2014 have ranged between 10 million and 20 million page views per day, in line with the article's original assertion. Quantcast's most recent data on the Huffington Post also show a marked drop from a peak of 20 million to 30 million page views per day, reached in mid-2012.

Tim Armstrong's AOL has done three notable things to try to become a news-based business reliant on ad dollars. None can be rightly called successful. AOL is still a company that relies on subscription revenue to prop up its earnings nearly 15 years after the dot-com bubble blew apart. Of the $147 million in adjusted operating income AOL reported in the fourth quarter, $146 million of it came from subscription revenues! Think about that. It's the ultimate legacy business -- a company kept alive by people who can't figure out how to get better service. Instead of putting what is essentially free money to good use by exploring new technological or service opportunities, Armstrong has been throwing it at doomed pet projects and blogs.

The mark of a bad leader
While each of these three bad buys would be problematic on its own, Armstrong has somehow managed to top his executive blunders with a PR flub for the ages. It all began when The Washington Post reported on changes to AOL's 401(k) plan, which now requires employees to remain "active" with the company past Dec. 31 to receive a one-time annual lump-sum matching payment relative to whatever they've contributed on their own. Most companies match with every paycheck, so this change effectively punishes anyone who doesn't time an exit to coincide with the start of the new year. It also punishes anyone else who might want to gradually invest more in a rising market instead of dumping all of his or her money into something all at once.

Why did Armstrong and the management team make this change? Armstrong offered two answers. The first was "it's Obamacare's fault," which in Armstrong-speak sounds like this when relayed to a CNBC interviewer: "As a CEO and as a management team, we have to decide: Do we pass the $7.1 million of Obamacare cost to our employees? Or do we try to eat as much of that as possible and cut benefits?"

Tim Armstrong made $12 million in 2012, in case you were wondering, a year in which AOL's subscription revenues more than offset over $33 million in adjusted losses in the news-focused part of the company Armstrong has so diligently been building since 2009.

The second answer was "distressed babies," a phrase that's sure to become a business-world meme for its sheer boneheaded insensitivity. Here's Armstrong again, talking to employees at a town-hall meeting about the benefits changes:

We had two AOL-ers that had distressed babies that were born that we paid a million dollars each to make sure those babies were OK in general, and those are the things that add up into our benefits cost. So when we had the final decision about what benefits to cut because of the increased health-care costs, we made the decision, and I made the decision, to basically change the 401(k) plan.

These comments created such a media firestorm that Armstrong has already backtracked on the 401(k) match policy change and publicly apologized, but that didn't stop the mother of one "distressed baby" from going public in Slate. Deanna Fei, whose husband works for AOL, delivered her second child by emergency cesarean four months early, agrees that the costs for her daughter's care could have conceivably soared into the seven figures, but (rightfully) has a big problem with being scapegoated for the benefits cut by a CEO who made more in one year than her family might in its lifetime:

I take issue with how he reduced my daughter to a "distressed baby" who cost the company too much money. How he blamed the saving of her life for his decision to scale back employee benefits. How he exposed the most searing experience of our lives, one that my husband and I still struggle to discuss with anyone but each other, for no other purpose than an absurd justification for corporate cost-cutting. ...

[T]here was nothing high-risk about my pregnancy. I never had a single risk factor for a preterm birth, let alone one as extreme as this one. Until the morning I woke up in labor, every exam indicated that our daughter was perfectly healthy. ... In other words, we experienced exactly the kind of unforeseeable, unpreventable medical crisis that any health plan is supposed to cover. Isn't that the whole point of health insurance?

When Tim Armstrong took the reins at AOL in 2009, it was a company largely dependent on subscriber revenue for its profitability. Tim Armstrong's AOL today is still a company dependent on subscriber revenue for its profitability. Nothing Armstrong himself has done has changed that equation in the slightest, and it's clear from the results over the duration of his tenure that this is a losing equation over the long run. Instead of blaming employees who get handed a bad medical break, maybe he should be taking a long, hard look in the mirror instead.