J.C. Penney managed to return to same-store sales growth in the fourth quarter, but the 2% rise is almost meaningless compared to the 30%-plus decline last year. J.C. Penney's turnaround is making little progress, and store closings like those recently announced by RadioShack may be inevitable.

The top of a recent press release from beleaguered retailer J.C. Penney (JCPN.Q) reads "Turnaround Remains on Track." The purpose of the release was to announce the first positive quarterly same-store sales growth since 2011, with the metric rising by 2% in the company's fourth quarter. During pre-market trading following the release, the stock initially rose on the apparent good news. But this rise didn't last, and the stock tanked during the trading day. J.C. Penney's results weren't nearly good enough, and the turnaround is far from on track. The company is left with few options, and a wave of store closings like the one recently announced by RadioShack (RSHCQ) may be inevitable.

Putting J.C. Penney's sales into perspective
J.C. Penney's sales completely collapsed during the tenure of former CEO Ron Johnson. This left the company with a cost structure built for $17 billion in annual sales, while actual sales had fallen below $13 billion per year.

The fourth quarter of fiscal 2012 was a complete disaster. Not only did same-store sales decline by a staggering 31.7%, online sales also fell by 34.4%. These numbers should help put the results from the fourth quarter of 2013 into perspective. A 2% rise following a 30%-plus decline is not a recovery. In fact, it's barely noticeable. 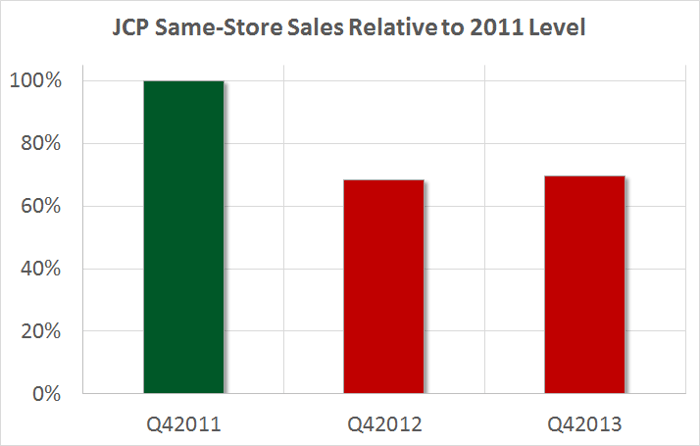 Time is running out
We won't see an update on J.C. Penney's balance sheet until the company reports earnings later this month, but the situation will likely be increasingly grim. The company likes to tout the amount of liquidity that it has available, with more than $2 billion at the end of the fourth quarter, but at the current rate of cash burn, this won't last long.

Having failed to meaningfully increase sales, J.C. Penney likely has no other option than to start closing many of its stores. A similar move was recently announced by fellow troubled retailer RadioShack after its turnaround efforts floundered, and J.C. Penney may be forced to follow suit.

While J.C. Penney and RadioShack took different paths to arrive at this point, both companies have largely become irrelevant to consumers. There's nothing special about either brand, and with both companies hemorrhaging money, it was only a matter of time before drastic measures became inevitable. RadioShack has finally realized that it needs to greatly reduce its store count, and the company plans to close about 11% of its stores, or about 500 out of a total of 4,500, over the next few months. While RadioShack's Super Bowl ad suggested that the company is trying to modernize, this is the same story that we've been hearing for the last couple of years.

I suspect that J.C. Penney will be following the same route as it contends with inevitable liquidity issues in the coming year or two. At its current size, there's very little chance that J.C. Penney can return to profitability before it runs out of money.

The bottom line
J.C. Penney barely improved upon its dismal performance during the 2012 holiday season in terms of sales, and the company offered no information on its margins during the period. With heavy discounting affecting other retailers, it's possible that J.C. Penney actually did worse this year in terms of profitability compared to last year. While management can claim that the turnaround is on track, reality seems to disagree.

AMC, J.C. Penney, and Norwegian Cruise Lines: One of These Is a Screaming Buy
376%