Please ensure Javascript is enabled for purposes of website accessibility
Log In Help Join The Motley Fool
Free Article Join Over 1 Million Premium Members And Get More In-Depth Stock Guidance and Research
By Patrick Morris – Feb 9, 2014 at 11:53AM

Even with a remarkable jump in its stock price over the years, Bank of America's latest results reveal that the it has truly turned the corner and could be poised for great things for years to come.

Despite the past troubles that once consumed it, with the calendar turned to 2014, to the delight of investors, the latest earnings results reveal Bank of America (BAC 0.24%) has officially moved onto the path of recovery.

A frightening past
The troubles that ailed Bank of America are worth repeating, and as of December of last year, it was revealed it had paid out more in legal settlements as a result of the mortgage mess ($43.9 billion) than competitors JPMorgan Chase (JPM 0.19%), Wells Fargo (WFC 0.23%), and Citigroup (C 0.10%) combined ($40.6 billion).

Even more striking was the reality that in the five combined years from 2008 to 2012, Bank of America had $13.6 billion of total net income, which was less than what JPMorgan Chase and Wells Fargo reported in 2012 alone. In fact, if you look at the three years from 2010 to 2012, the difference is even more startling. 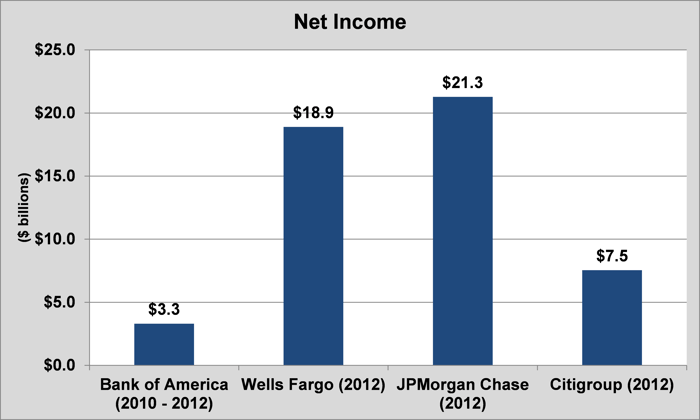 And while 2013 was a very strong year for the performance of Bank of America and its stock, it should come as no surprise that when you consider from the beginning of 2010 to the end of 2013, it trailed its peers by a wide margin when it came to the total return: 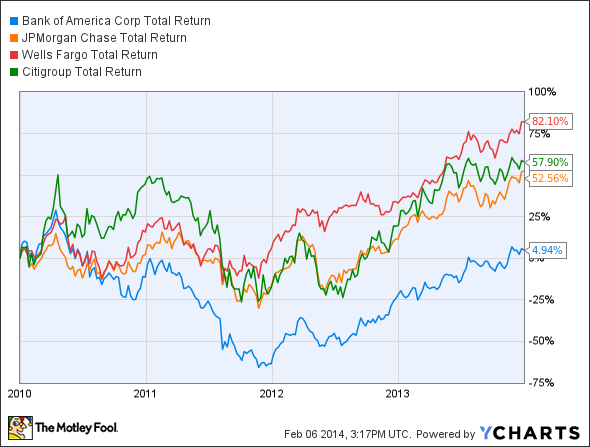 However, 2013 did not simply represent a strong year from the perspective of the stock of Bank of America, but most importantly from its businesses -- in just one year it was able to almost eclipse its previous five years of net income: 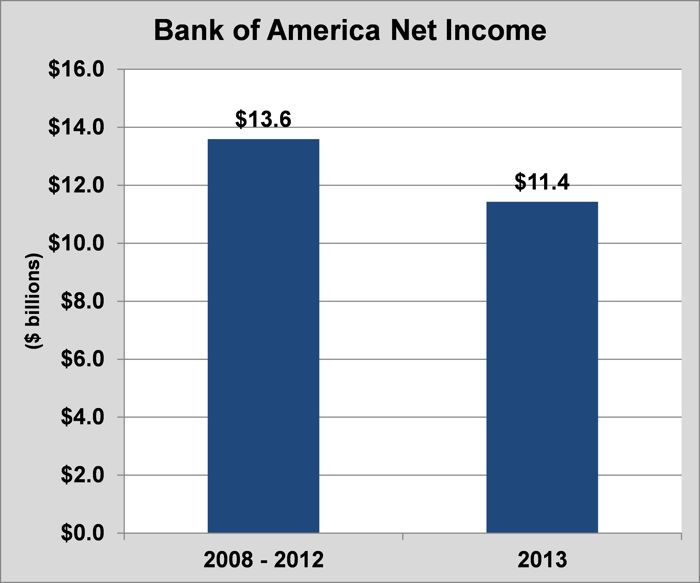 A remarkable recovery
There is no denying Bank of America had an almost incomprehensible amount of troubles from 2008 to 2012. Yet 2013 marked a watershed year for the bank as it returned to normalcy.

Not only did Bank of America watch its income jump from $4.2 billion in 2012 to $11.4 billion last year, but it reduced its long-term debt by $25 billion (from $275 billion to $250 billion), cut nearly $3 billion in expenses, and added almost $12 billion to its capital base (what it uses to absorb potential losses).

After excluding provision for credit losses, which can at times cloud the numbers (often for the better), each part of the business saw its income rise year over year:

What is even more striking is the reality that this substantial improvement was all done with Bank of America having a return on average assets half of what its peers experienced -- 0.5% versus 1% -- which means even more improvement will be realized in the coming years.

After its stock has tripled from its depths of 2011, many have begun to question if there is anything left for Bank of America to do. But the reality is, the monumental improvements it saw in 2013 could mark just be the beginning of what is to come.