January was a choppy ride after 2013's relaxing cruise to superior gains. Is it a warning sign or just a bump in the road?

Last year was remarkably calm by modern market standards. We've already experienced five trading days in 2014 in which the Dow Jones Industrial Average (^DJI 0.10%) fell by 1% or more, while in 2013 the first 1% drop didn't hit the blue-chip index until Feb. 25! That smooth sailing can be partly attributed to a thinner market than we've been used to -- fewer trades were made on the New York Stock Exchange in 2013 than in any year since 2005. And fewer shares were traded than in any year since at least 2004 (the earliest year for which the NYSE retains complete data ), even though high-frequency trading, or HFT, has exploded since that time:

This year is starting to look a little different. January's total NYSE trade volume already surpassed that of any month since June 2012, even though the monthly share volume was only good enough to rank as the 10th most-active month (out of 19) since that time. High trade volumes are a byproduct of HFT algorithms, which can move a small number of shares in milliseconds thousands or millions of times every day. You can see the rise and fall of HFT on the market by the dramatic change in trading volumes over time: 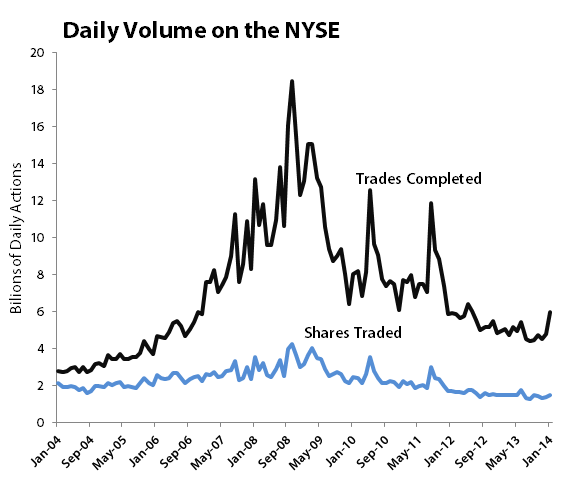 The huge spikes should be familiar to seasoned investors -- volume exploded during the financial crisis, and there were two "flash crash" moments during the subsequent rebound in which far more shares exchanged hands than usual. However, that doesn't necessarily mean that an uptick in volume (and the volatility that typically mirrors it) portends long-term doom for the markets. After all, we survived the peaks of 2010 and 2011 without a crash, although 2011's uptick corresponded to that year's political wrangling over the debt ceiling that resulted in a ratings downgrade for the United States.

A return to more active times might even be a good thing, as it would indicate broader interest in the markets. However, an uptick in the Volatility Index (^VIX -3.93%) to go along with greater trading volume is more common, and is rarely a good sign for the near-term strength of the market. By that measure, the markets aren't exactly luring Main Street back to the fold yet: 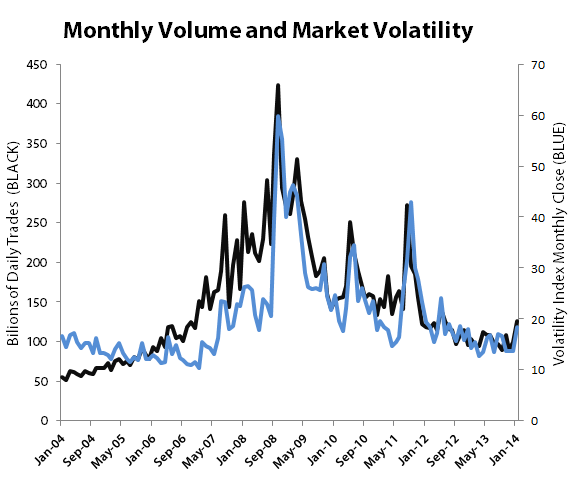