Please ensure Javascript is enabled for purposes of website accessibility
Log In Help Join The Motley Fool
Free Article Join Over 1 Million Premium Members And Get More In-Depth Stock Guidance and Research
By Todd Campbell - Feb 10, 2014 at 8:00AM

The market for lab equipment is improving in Europe and the U.S., boosting results for Mettler Toledo.

First, investors were embracing globally diversified companies to insulate portfolios from risk in the United States. Then, investors were focusing on U.S.-centric companies to avoid exposure to weak European markets. Lately, investors are becoming increasingly more interested in companies likely to benefit from a recovery in the European Union, and that's been supporting shares in Mettler-Toledo (MTD 5.41%), a medical instruments maker that gets more than a third of its sales from the region.

Mettler's strong share-price performance in 2013 has just been capped off by impressive fourth-quarter revenue and earnings that exceeded expectations. That news helped lift shares 7% as investors become increasingly confident that lab spending on equipment from Mettler and competitors Waters (WAT 4.74%) and Thermo Fisher Scientific (TMO 5.97%) will head higher this year. 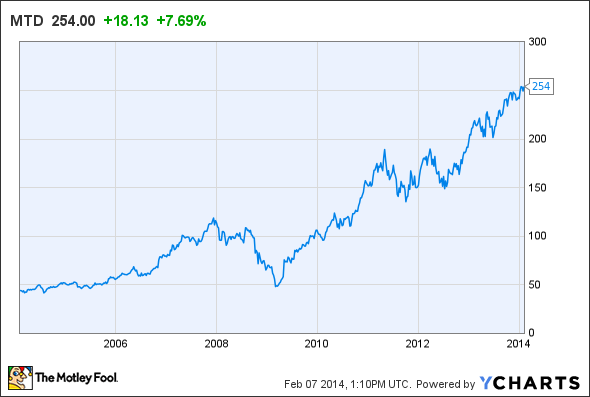 Unlocking pent-up demand for profit
The financial crisis in the U.S. and austerity-driven cutbacks in Europe deferred a lot of sales for replacement equipment, which are a major source of Mettler's sales and profit. As the U.S. recovery picks up steam and Europe begins showing signs of bottoming, pent-up replacement activity is helping lift Mettler's results.

The company's sales in Europe grew 8% in the fourth quarter versus last year, outpacing 2% growth in the America's and flat year-over-year results in Asia, which was weighed down by weaker demand in China.

Mettler's restructuring and cost-cutting decisions during the crisis are paying off, as higher sales in Europe are translating more readily to the bottom line. Over the past three years, get-lean initiatives helped lift Mettler's gross margin to nearly 55% last quarter from less than 51% in 2009. As a result, net income hit a five-year high of $110 million last quarter. 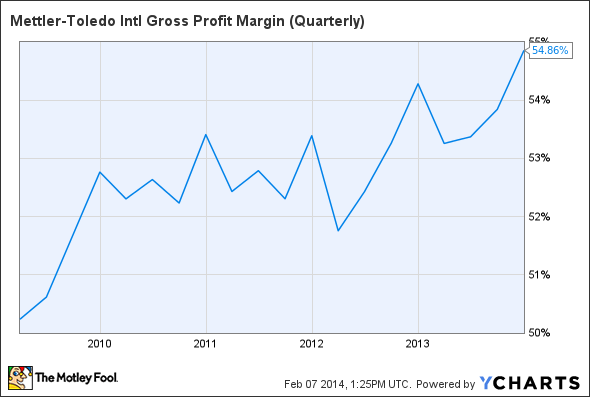 Overall, Mettler's sales grew a relatively tame 3% year over year in Q4, but its adjusted earnings-per-share growth jumped more than three times as much, climbing 10% to $3.63. That Q4 performance brought full year EPS to $10.58 and supports Mettler's new upwardly revised projection for $11.40 to $11.60 per share in earnings for 2014.

Spending tailwinds for research
Demand for Mettler's lab equipment should benefit from rising global research spending this decade. Some of the fastest growth in research and development spending is projected to come out of China, where sales were sluggish last fall. Longer term, R&D spending in China is expected to eclipse U.S. spending by 2022.

That faster growth in China will push the percentage of Mettler's sales coming from Asia to new highs, but spending here in the U.S. is expected to grow post-sequestration, too. The return to a more normal budgeting process in the U.S. offers greater clarity for researchers depending on FDA funding to assure a quicker path to commercialization. It also helps bolster academic demand that is supported by NIH funding. The budget for the NIH, while still lower than its peak, is set to increase by $1 billion this year.

More broadly, future R&D funding may head even higher, as researchers remain pessimistic about current research budgets. A December study by research firm Battelle noted that 45% of researchers believe their budgets are too thin.

Overall, U.S. life sciences research and development spending is projected to climb 2.2% this year to $93 billion. Global spending will grow 3.1% to $201 billion, which puts it nicely higher than the $184 million spent in 2011, according to Battelle.

As a result, the rising tide for research spending isn't just helping Mettler. Waters' sales climbed 8% to $565 million last quarter as sales in Europe improved 5% from last year thanks to double-digit growth from university customers. Adding conviction to the European recovery story, Waters cited improving European demand as one of the reasons behind its growth.

That sentiment for improving conditions was echoed in Thermo's fourth-quarter earnings call, during which Thermo similarly noted improving conditions in Europe, saying that sales grew slightly faster than the 6% overall revenue growth the company recorded in the quarter.

Fool-worthy final thoughts
The medical instruments industry has faced headwinds tied to tight purse strings. However, if the U.S. remains on track and Europe recovers, spending for lab equipment should provide tailwinds for Mettler and its industry competitors Waters and Thermo this year. That should prove good news for earnings, given that companies have tightened their own belts in response to the recession. If so, Mettler should be on the radar for investors looking to profit from growing global R&D spend.