When athenahealth (ATHN) issued tepid profit guidance for 2014 back in December, investors knocked shares down more than 10%. However, investor fear may have been misplaced given hope for accelerating sales has moved athenahealth's shares to new highs this year.

The company, a provider of cloud-based IT solutions for health care providers including doctor's offices, put up strong fourth quarter results and won a key industry endorsement in January.  That has investors increasingly confident the company's plan to focus on market share rather than profit will prove savvy. 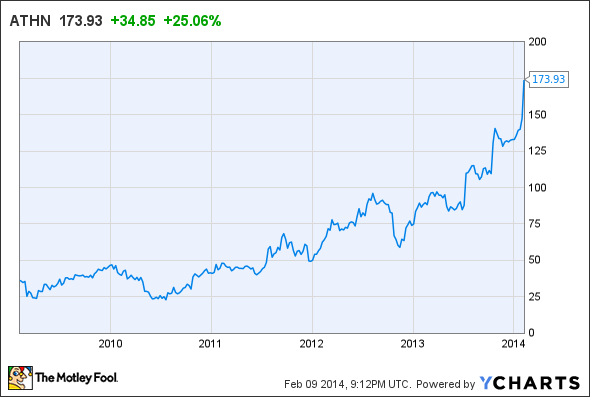 Growing adoption of electronic platforms
This wasn't the first time athenahealth's lukewarm profit guidance forced investors to the sidelines before a rally. In December 2012, the company issued a similarly downbeat forecast for 2013 prior to shares rallying more than 80% last year.

As is the case for many growth stocks, rising end user demand is trumping risk to short term profit. In athenahealth's case, end user demand is driven by doctors implementing next generation practice management software ahead of the switchover to ICD-10 diagnostic codes this fall. Doctors are also embracing health care IT solutions to take advantage of meaningful use payment incentives tied to health care reform.

While the physician software market was previously dominated by a wide range of small regional players, concerns competitors wouldn't be able to adjust quickly to regulatory change has practices increasingly turning to bigger firms instead.

In order to benefit from that trend, athenahealth acquired mobile app company Epocrates last year. Epocrates mobile apps have been downloaded by more than 1 million physicians, providing an entrenched user base to grow brand awareness for athenahealth's software suite. The company's goal to boost brand recognition through Epocrates appears to have paid off this past year. 39% of physicians are familiar with athenahealth exiting 2013, up from 31% a year ago.

Thanks to the growing awareness, more than 50,000 providers are using the company's athenaCollector practice management software as of December, up from less than 40,000 a year ago. The number of providers using athenaClinicals, the company's electronic health records, or EHR, offering, grew 54% last year to nearly 17,000.

And the company's fastest growing product last year was athenaCommunicator, a patient facing health records solution that allows doctors to reduce no shows, target patients with relevant services, and reduce staff time spent on the phone thanks to online scheduling and self-pay features. The number of providers using athenaCommunicator grew more than 100% to over 28,000 last year.

Overall, athenahealth's solutions produced $172 million in fourth quarter revenue for the company, up 48% from last year. That brought full year sales to $595 million, up 41% from 2012.

Competition for EHR IT dollars
In order for athenahealth's momentum to continue, it will need to stay a step ahead of competitors and win market share away from Epic Systems, eClinicalworks, and Allscripts (MDRX 0.33%). Those three compete against athenahealth's product lineup and dominate EHR software sales, accounting for nearly a third of that market. Since athenahealth only owns 3% market share in EHR, the company has plenty of room to challenge these leaders for sales growth.

Epic is the biggest of the three with an 11% market share. Until athenahealth ranked as the #1 health care software vendor by research firm KLAS in its annual report last month, Epic had held that spot for eight consecutive years. In addition to winning best overall software vendor, athenahealth also ranked as the best overall physician practice vendor, the best patient portal, and the best in practice management software for practices with less than 75 physicians.

Those wins may help athenahealth win business across all its solutions, including in practice management where it competes against GE Healthcare's Centricity and Quality Systems' (NXGN 0.26%) NextGen.

That may already be playing out given athenahealth posted organic growth of 28% in 2013, excluding the Epocrates acquisition. Allscripts, which has triple the market share of athenahealth, saw its third quarter sales fall from $361 million in 2012 to just $330 million in 2013.  And Quality Systems' fiscal third quarter sales for the period ending December fell 5% year over year to $109 million.

Fool-worthy final thoughts
If you're expecting athenahealth's investments to pay off with surging profit this year, it's likely you'll remain disappointed. The company is maintaining its focus on winning sales rather than delivering earnings. As a result, athenahealth expects earnings per share to come in between $0.98 and $1.10 this year, down from the $1.16 in 2013 and about in line with 2012.

So, instead of focusing on earnings per share, investors may be better served watching how the battle for market share with Epic, Allscripts, and Quality Systems shapes out in 2014.  After all, if athenahealth can boost its market share this year, it may find it is better prepared to eventually deliver coveted earnings growth.