Heavy promotions are key for retailers during the holiday season. This is especially true when people are less willing to open their wallets. Moreover, when all of the other industry players promote their products and provide deep discounts to attract customers, the ones who don't will face the consequences. Elizabeth Arden (NASDAQ: RDEN), a provider of beauty products, is an apt example.

Elizabeth Arden's decision not to promote its products weighed on its sales during the holiday season. Its revenue from the North American region plunged 9% for the first six months of fiscal 2014. Hence, the company lowered its outlook for the second quarter and cut its full-year guidance, which made its share price fall considerably.

The beauty product retailer reported dismal first quarter-results as its revenue declined by $1 million to clock in at $343.6 million. Elizabeth Arden witnessed lower sales in the North American region, which makes up two-thirds of the company's total revenue, as revenue fell 3% from last year's quarter. Hence, demand for the retailer's products has declined.

Stacked against peers
Compared to other players like Estee Lauder (EL -1.21%) and Revlon (REV -4.54%), Elizabeth Arden definitely lags behind. Elizabeth Arden has been unable to outpace its peers as the chart below indicates: 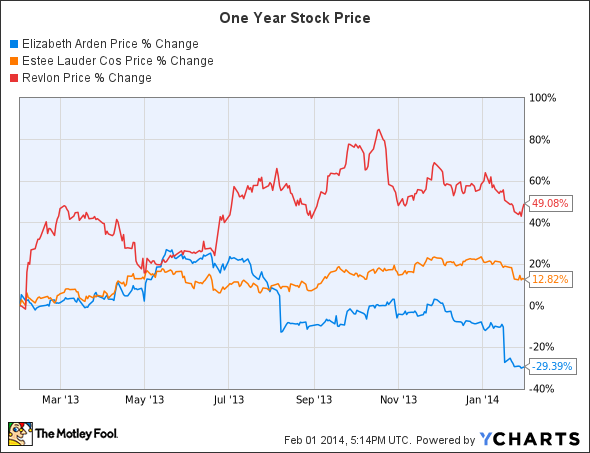 Elizabeth's stock price plummeted by 29.4% over the last year, which compares to Estee Lauder and Revlon's appreciation of 12.8% and 49.1%, respectively. Arden's lackluster performance mainly occurred because of weaker demand for its products.

Estee Lauder has performed well because it has launched new products and promoted them well. This was reflected in its first quarter results as sales rose 5% from the year-ago quarter. One of the key contributors to this growth was Estee Lauder's e-commerce business which posted double-digit growth. Online sales in China and the U.S. have been increasing. Hence, the company should see future benefits from this growth. In fact, new product launches should continue to benefit Estee Lauder as it announced the launch of a new Skin Activating Treatment lotion this month.

Revlon, on the other hand, provided the highest return of this group at 56.5% despite a revenue drop of 2% in its last reported quarter. The decline was mainly due to unfavorable currency fluctuations. In fact, Revlon posted remarkable bottom-line results, including net income of $9.5 million versus a loss of $15 million in the year-ago quarter. Moreover, the company acquired The Colomer Group, a beauty product provider which offers products to professionals and salons. This will not only expand Revlon's product portfolio but also add $500 million to its annual revenue. Hence, Elizabeth Arden faces stiff competition from both Estee Lauder and Revlon.

Some moves planned
Although Elizabeth Arden has been underperforming, the retailer has made a number of moves which might help it stage a comeback. For example, the beauty retailer plans to expand its footprint in Europe where it has a market share of only 2%. Moreover, Elizabeth Arden has been focusing on the international market where its sales grew 14% in fiscal 2013.

Also, the company has been expanding its product portfolio, especially fragrances, in order to attract customers. After the successful launch of "Girlfriend," Elizabeth plans to launch "The Key," another fragrance by celebrity Justin Bieber.

The fragrance retailer has also been remodeling its stores in order to make them more attractive for customers. The decision to revamp its flagship stores has already started to bear fruit and the company expects to benefit further when all of the store remodels are completed.

Bottom line
Elizabeth Arden is undertaking a number of efforts in order to win back lost customers. The company has been expanding its wings, both in terms of products as well as reach, and it is expected to reap the benefits. However, lower holiday sales, a lowered outlook, and an inability to outpace peers are reasons enough to stay away from this company. Therefore, staying on the sidelines until the right time would be prudent.