Markets have gotten off to a slow start to the week, which isn't all bad considering that stocks started last week by plummeting 2%. The Dow Jones Industrial Average (DJINDICES:^DJI)  is down 0.05% with 30 minutes left in trading, while the Nasdaq Composite and S&P 500 indexes are both up less than a half percent on the day.

There wasn't much economic news to drive stocks, and with a weekend to think over January's jobs report it appears there's enough bullish news there to keep the markets at least mixed.

McDonald's continue to fall flat
The big news today was out of McDonald's (NYSE:MCD), which continues to see health-conscious U.S. consumers leave its stores in droves. The company said this morning that January same-store sales in the U.S. were down 3.3%, following a 1.4% drop in the fourth quarter. Overall, same-store sales were up 1.2%, helped by a 5.4% rise in Asia-Pacific, the Middle East, and Africa.

This is a stark contrast to Chipotle Mexican Grill (NYSE:CMG), which reported a 9.3% increase in same-store sales in the fourth quarter. Not only are more customers choosing Chipotle and other healthier options than McDonald's, they have pricing power as well.

Recent numbers are indicative of long-term consumer trends of people eating healthier, which isn't McDonald's forte. The revenue chart below shows just how strong Chipotle is versus its larger rival. 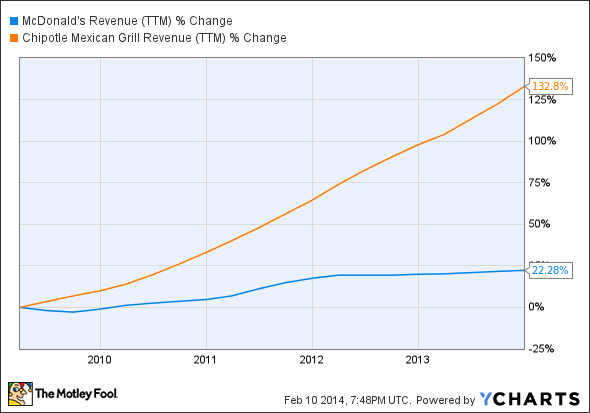 McDonald's has been through challenges before, but investors should be worried about how the company will adapt to new habits and competition that has a reputation for offering both quality and food that is relatively healthy.

Ironically, McDonald's could have avoided this problem if it would have kept Chipotle under its control, which it was until its IPO in 2006. I guess McDonald's bosses didn't see the large opportunity in the fast-casual dining space, something Chipotle is now dominating, taking share from its former owner.