Please ensure Javascript is enabled for purposes of website accessibility
Log In Help Join The Motley Fool
Free Article Join Over 1 Million Premium Members And Get More In-Depth Stock Guidance and Research
By Patrick Morris - Feb 10, 2014 at 7:00AM

It doesn't have a position in JPMorgan Chase or Citigroup, but Berkshire Hathaway owns Bank of America; yet Warren Buffett's biggest holding is Wells Fargo, which is poised for another great year..

Warren Buffett's favorite bank (and his company's biggest holding) Wells Fargo (WFC -1.30%) delivered strong results in 2013; but insights from its executives reveal that 2014 may, in fact, be even better for the acclaimed bank.

The bank Buffett loves
At last count, Berkshire Hathaway owned 463 million shares of Wells Fargo, which represented about an 11.5% stake in the company, and the position would have a value of almost $21 billion. In fact, Wells Fargo made up almost 20% of the stock portfolio at Berkshire Hathaway, meaning Buffett believes in it perhaps more than any other company.

When you consider Buffett once said at the 2009 Berkshire Hathaway shareholders meeting, "Wells Fargo, among the largest banks, has the best competitive position," and later added, "I would love to buy all of U.S. Bank or Wells Fargo," the guidance from Wells Fargo CEO John Stumpf and CFO Tim Sloan on its latest earnings call, will likely make Buffett even more excited for the future of the bank.

A strong 2013
Even in the midst of a waning mortgage and refinancing boom as interest rates rose, Wells Fargo had an impressive 2013. Despite falling revenue, its net income jumped 16%, to $21.9 billion. It continued its trend in the fourth quarter of reporting record net income -- the 11th quarter in a row it has done so -- which led to 2013 being a year in which it also set its record for the highest annual income, as well. 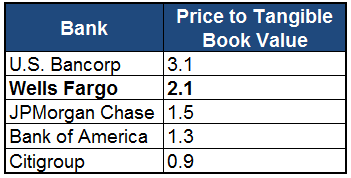 Yet, every investment consideration should not simply look to the past, but instead the future, and it was from the mouths of Wells Fargo executives where the critical insights were learned.

An even better 2014?
On the most recent earnings call, Stumpf said simply, "We believe we are well positioned for 2014, and we are optimistic about the many opportunities ahead for continued growth." Yet Sloan was even more boisterous, saying, "While the future is never certain, we start 2014 in a much better position than we started 2013."

Many of the other executives at the leading banks were much more reserved about their guidance for the full year, and often highlighted that, while things had certainly improved, more work needed to be done. Consider the words of Michael Corbat, the Citigroup CEO who said, "Looking to 2014, we expect to be tested again as we believe the environment, while improving, will remain challenging." He certainly takes a different tone than Stumpf and Sloan at Wells Fargo.

While one always has to take the words of executives with an appropriate grain of salt, and understand that their perception may not always match reality, it is truly interesting to see the voices from often the most conservative bank be seemingly the most optimistic about the future.

When you consider Wells Fargo has delivered again and again, while maintaining the continued ardent support of one of the greatest investors ever, one has to imagine that, while 2013 was great and met with continual records, 2014 is likely poised to bring much of the same.