Polaris (PII 1.69%) recently reported high growth in non-core businesses, such as its motorcycle and its parts, garments, and accessories, or PG&A, divisions, which saw sales grow 94% and 33%, respectively. While these segments are important for the company's future, Polaris' off-road vehicles, or ORV, division still brings in roughly 60.8% of the company's revenue. With the segment's revenue growing 16% to $659.1 million in the company's fourth quarter of 2013, Polaris is still working to maintain its lead over competitor Arctic Cat (ACAT).

Off-roading in 2013
According to Polaris, most of the growth in OVR can be attributed to consumer enthusiasm about its new ATVs and side-by-side vehicles introduced in the second half of the company's 2013 fiscal year.

The company gained market share in ATVs with the help of products from model year 2014, including the Sportsman 570 and the Scrambler 1000. The company's North American retail sales for ATVs were up mid-single digits amid an industry that remained flat. This growth might be above the industry average, but it's also lower than Arctic Cat's, which saw North American ATV retail sales increase by 15% during its most recent quarter.

Polaris's side-by-side sales also grew in the low-double digits for 2013 which slightly outpaced a market that grew 10%. The company gained market share in this segment, but it was less than previous years. Retail sales of Arctic Cat's new Wildcat line up are up 38% for the year and drove side-by-side sales.

Arctic Cat might have recently experienced positive retail sales results, but its gross margin took a hit due to ATV product mix and a new partnership with Yamaha. 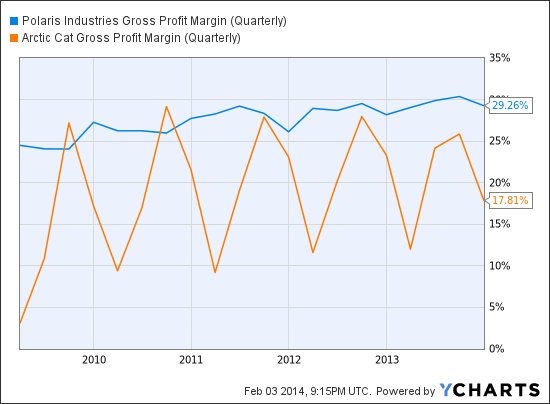 So while Arctic Cat's sales are increasing, Polaris retains more of its revenue.

Moving forward
Despite increasing competition form Arctic Cat's ORVs, Polaris is optimistic for the year ahead. So far, 2014 models are selling well, driven by the new RZR XP 1000, the fastest-selling side-by-side in the company's history. In addition, the new Sportsman 570 ATV and four seat RANGER Crews have shown positive sales growth moving further into the year.

Polaris is still at the top of the North American ATV industry and has solid growth for side-by-sides, but the company has also created a new ORV segment.

Polaris recently announced the Sportsman ACE, an ORV that combines the handling and power found in ATVs with the security of a side-by-side to create a ride-in, single-seat vehicle designed to attract newer, less experienced riders to the off-roading industry. The new ORV comes with a suggested retail price of $7,499 and is currently expected to produce margins that are comparable to ATVs. With the launch comes some worry of cannibalization but, according to COO Bennett Morgan, "[We're] expecting some [cannibalization], but frankly, less than most of our products that we launched."

The core is still strong
With Polaris' new Indian motorcycle line and fast growing PG&A division the company is developing a diverse line of products to help it achieve its goal of growing yearly sales to $8 billion by 2020. But even with these new segments, most of the company's revenue comes from ORVs. With the 2014 models' early success, and with the introduction of the Sportsman ACE, it looks as though Polaris' ORV segment is in a position have significant growth during 2014.

Ben Popkin has no position in any stocks mentioned. The Motley Fool recommends Polaris Industries. Try any of our Foolish newsletter services free for 30 days. We Fools may not all hold the same opinions, but we all believe that considering a diverse range of insights makes us better investors. The Motley Fool has a disclosure policy.