The latest episode of AMC’s The Walking Dead, “After,” finally got these three things right. Did these vast improvements help it devour the Winter Olympics on NBC?

The ninth episode of The Walking Dead attracted 10.4 million viewers in the 18 to 49 demographic (out of 15.8 million total viewers), matching its previous series high and achieving a rating of 8.3. Those high numbers also propelled AMC's companion show, The Talking Dead, to an impressive 5.9 million total viewers, with 3.9 million viewers in the 18 to 49 demographic.

The Olympic games, by comparison, attracted a larger number of total viewers at 26.3 million, but finished the night with a 6.9 rating among 18 to 49 year olds.

Not only was the new episode, "After," extremely popular, but it also marked an admirable return to form for the series, which had been on shaky ground throughout the first half of the fourth season.

In a previous article, I discussed the three big mistakes that the showrunners had made with the show -- longer seasons, pointless new characters, and a lack of the "quiet" moments that increased viewers' attachment to the characters.

Thankfully, "After" was a huge step in the right direction, thanks to these three things that the show absolutely got right on Sunday.

Readers of the comic know that Kirkman excels at character development in a post-apocalyptic world. Rather than emphasize zombie attacks, Kirkman constantly emphasizes the rationing of food, water, and ammunition, and the violence of humans against each other in a lawless, broken society.

"After," written by Kirkman, was a solid return to those roots.

It's a quiet episode, despite the hordes of zombies that Michonne decapitates on her way out of the prison, and it's one that feels loyal to the comics.

Unfortunately, some viewers didn't feel the same way. Some of the lower rated reviews on TV.com criticized the episode for being "full of monologue and drama" and simply "another filler episode."

These viewers obviously expect something dumber and more action-packed like Resident Evil, but thankfully that's not what The Walking Dead is all about.

2. On the road again...
Leaving the prison was also an excellent move in both the comics and the show.

Keeping all the characters in a single place might seem logical, but the plot and character development become quite stagnant. 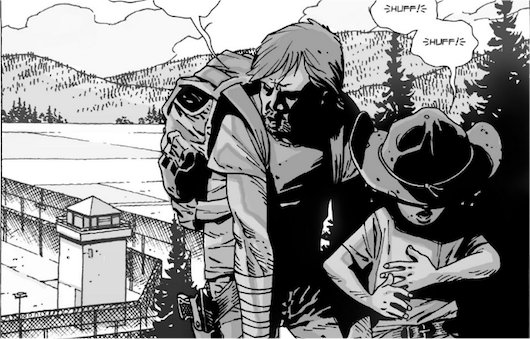 Carol teaching survival classes, Rick planting vegetables, the virus outbreak, and two solo episodes featuring the Governor in the first half of Season 4 were clear indications that the writers were struggling to find new plots to use within the prison.

In my opinion, the show works best when it is on the road. The constant fear that no place -- Shane's camp, the CDC, Hershel's farm, Woodbury, the prison -- is safe causes a sense of constant dread and hopelessness that is critical to the environment of The Walking Dead.

Moreover, splitting up the characters and allowing them to find each other gives more screen time to each character and offers more opportunities for character development -- something that was severely lacking within the crowded prison.

In The Walking Dead, we need solid character development so we actually feel something when a character meets his or her grisly end.

3. The governor's still dead
Prior to Sunday's episode, there were persistent rumors that the Governor (David Morrissey) could return, despite clearly perishing in the midseason finale.

Thankfully, the recent episode showed that the Governor was clearly dead with a bullet in the head. That's not to say, however, that he might not return to the show as a hallucination or appear in various flashbacks.

However, as fine an actor as David Morrissey is, I really think it's time for the show to retire the whole Governor saga. We've spent one and a half seasons on the rise and fall of the Governor, and it has reached an appropriate conclusion.

The Governor, like Shane, has already outlived his comic book counterpart considerably. The comic book Governor died during the first assault on the prison, which occurred in the Season 3 finale.

While some fans say it's time for a new "big bad" to take over (Negan is a popular choice), I think the show works better without a major villain for now. The Walking Dead is really a show about survival, not pitched battles against clearly defined villains.

Near the end, the Governor's over-the-top antics arguably tarnished the realistic credibility that the show had built up over the past few seasons.

What The Walking Dead means for the future of AMC
With a budget of $2.8 million per episode, The Walking Dead is one of AMC's most expensive shows, along with Mad Men and the recently concluded Breaking Bad.

As for the rest of AMC's lineup, Mad Men will end in 2015, Hell on Wheels remains on shaky ground, The Killing will conclude on Netflix, and Low Winter Sun was canceled after only one season.

Therefore, The Walking Dead will remain AMC's most important source of advertising revenue until AMC can launch another hit series. For now, AMC is working on a spin-off of The Walking Dead, which is scheduled to arrive in 2015, and a spin-off of Breaking Bad starring Walt's lawyer Saul Goodman will premiere this November.

Whether or not either spin-off cheapens the original shows (as CBS (PARA 5.08%) notoriously did with CSI) remains to be seen, but it's a strong indication that AMC intends to keep The Walking Dead on the air for as long as possible.

Breaking Bad worked perfectly because it ended exactly when creator Vince Gilligan wanted it to end. Other shows -- like Disney (NYSE: DIS)/ABC's Lost, the CSI franchise, CBS/Showtime's Dexter, and Fox's (NASDAQ: FOX) Glee -- simply kept running until they burned out.

In essence, these shows became walkers, shadows of their former selves that were finally shot dead after their ratings fell below acceptable levels. Let's hope that AMC doesn't have to do the same to The Walking Dead.

Will Missing Out on ‘The Walking Dead’ Creator’s Latest Hit Hurt AMC Stock?

AMC Networks Calls Saul, But Gets Put on Hold

How HBO Plans on Replacing True Blood and Boardwalk Empire