Please ensure Javascript is enabled for purposes of website accessibility
Log In Help Join The Motley Fool
Free Article Join Over 1 Million Premium Members And Get More In-Depth Stock Guidance and Research
By Cory Renauer – Feb 11, 2014 at 9:30AM

When Merck (MRK 0.64%) posted an annual net income loss of 28.6% before the bell on February 5, I hardly expected shares to jump 2% at the open. Top and bottom lines slightly below consensus estimates should have dampened the mood even further. Despite the uninspiring figures, on a day where the broader market fell, America's second largest drugmaker finished the day slightly positive. In fact, over the past month, the S&P 500 has fallen over 4%, while Merck has risen over 7.5%. 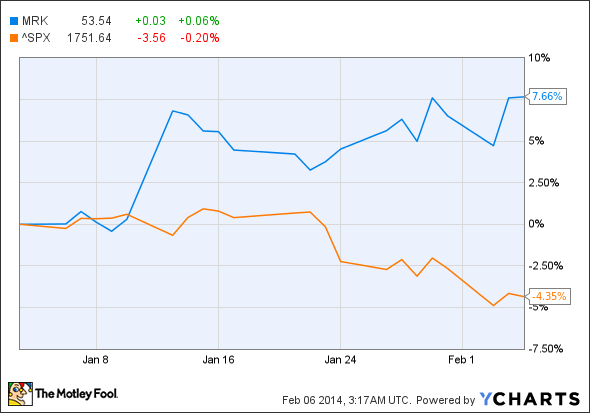 Clearly it wasn't Merck's financial performance during 2013 that pleased the Street. Lately, optimism surrounding the company's next-generation cancer therapies have buoyed the drug major's stock price, while post-exclusivity sales of former No. 1 product Singulair have plummeted. The company has a lot riding on an immunotherapy candidate facing competition from Bristol-Myers Squibb (BMY 0.13%), Roche (RHHBY 1.08%), and latecomer AstraZeneca. Let's take a look at the competing programs, to see if the excitement is justified.

How they work
Merck, Bristol-Myers, AstraZeneca, and Roche all have promising candidates in the pipeline that act on the same pathway. A basic understanding of their function should help us better evaluate their potential going forward.

One of the most puzzling aspects of oncology has been the way tumors elude the immune system. One method of avoiding attack is by taking advantage of the PD-1 inhibitory protein found on the surface of activated T-cells. Many types of cancerous tumors present a specific antigen on their surface that interacts with the inhibitory protein and prevents the immune system from attacking.

You could think of the activated T-cell as an angry robot with PD-1 as an off-button. Antigens on the surface of tumor cells works like a broomstick that pushes the off-button before it can attack. Covering the button, or otherwise thwarting the broomstick, would allow the immune system to do its job and destroy the cancerous cells.

PD-1 competitors
Merck's MK-3475, and Bristol-Myers' nivolumab are both monoclonal antibodies that throw up a blockade over the PD-1 protein. The main difference between the two is that nivolumab is fully human, while MK-3475 is humanized. Although Merck's therapy is designed to avoid immunogenicity, or the triggering of the body's immune system against the antibody, it could be something to keep an eye open for given that Merck's antibody is not human.

Unlike MK-3475 and nivolumab, Roche's anti-PDL1 immunotherapy, MPDL3280A covers the broomstick, stopping it from switching off activated T-cells. During its recent earnings call, AstraZeneca discussed plans for advancing an anti-PD1 and anti-PDL1 candidate that are both in phase 1 clinical trials.

Race standings
Foolish author Stephen Simpson and I share the opinion that the market places too much emphasis on which therapy hits the market first. Still, I feel that the attention given in-house to quickly advancing a candidate through the development process speaks volumes about a company's confidence in its potential.

If you must have a leader, Merck seems most likely to market its PD-1 immunotherapy first. MK-3475 received a Breakthrough Therapy designation from the FDA last year for the treatment of advanced melanoma. This means the agency should allow the company to file a Biologics License Application (BLA) for MK-3475 before seeing its long-term survival data. Last month, the company announced that it had already started a rolling BLA, and expects to complete it in the first half of the year.

Further illustrating Merck's confidence in MK-3475 is the recent announcement of upcoming combination trials in collaboration with Amgen, Incyte, and Pfizer. The company has also signed a recent discovery pact with Ablynx. The Belgian biotech has a proprietary discovery platform that uses smaller, more stable, humanized versions of antibodies that exist in camels and llamas. These nanobodies are capable of acting on multiple targets unavailable to their larger cousins, with a lower toxicity profile.

Although Merck's PD-1 therapy might hit the market first for advanced melanoma, you shouldn't let that fact discount the effort Bristol-Myers has put into nivolumab, and the rest of its immuno-oncology program. Its candidate has four approved phase 3 trials.

Overall, Bristol-Myers and Merck are leading the PD-1 charge together. Roche's PD-L1 therapy is well behind, with a single phase 3 lung cancer trial that has not started recruiting. AstraZeneca's PD-1 candidate is in a single Phase 1 trial. Its PD-L1 antibody is in several phase 1 trials, and a phase 1-2 trial in combination with GlaxoSmithKline's recently approved BRAF mutation specific melanoma combo.

Foolish final take
One of the hallmarks of high-points in market cycles is a disregard for earnings in the anticipation of future prospects. I would never try to predict the end of the bull run -- after the past couple weeks, plenty are -- we've been enjoying, but it is worth pointing out Merck's currently high valuation, despite sinking profits. 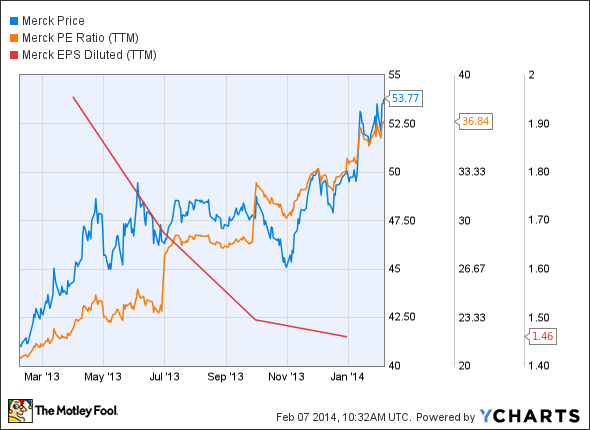 Given the potential for MK-3475, expecting significantly increased earnings going forward is reasonable. However, it's important to remember that when a company's price is based this heavily on optimism for its future, moderate changes in sentiment are amplified in price fluctuations. Before diving into this stock, you should at least be prepared to experience flat to negative returns until this oncology program has a chance to prove itself with recorded sales.