Hasbro is positioned for accelerating growth and generating consistent capital distributions for investors. This toy maker is not playing games. 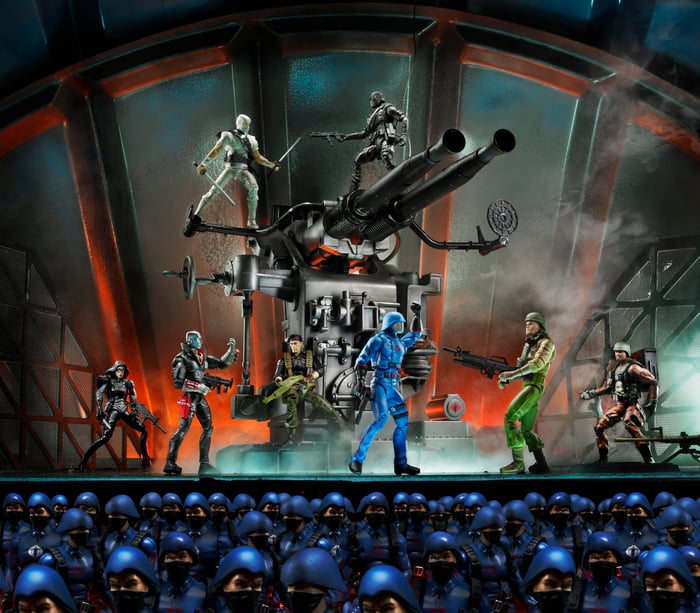 Hasbro (HAS 1.66%) reported lower-than-expected earnings for the fourth quarter of 2013 yesterday. However, the company is clearly outperforming its biggest competitor, Mattel (MAT 2.68%), while at the same time positioning itself for growth in the medium term and rewarding shareholders with big cash flow distributions. Is it the right time to invest in Hasbro?

No kidding around
Both sales and earnings for the last quarter came in below analyst expectations. However, Hasbro jumped by more than 4.5% on Monday. After all, past performance is only prologue to the future, and the company is well positioned for growth in the coming years.

Sales during the quarter were almost flat at $1.28 billion, but marginally below analysts' forecast of $1.3 billion for the period. Adjusted earnings per share of $1.12 decreased 6.7% versus the fourth quarter of 2012 and also missed analysts' expectations of $1.23 per share.

The boys category was the weakest spot during the quarter, with revenues falling by 16% during the period. Preschool sales fell by 1%, while sales in the games category increased by 2% during the quarter. The girls category, on the other hand, delivered a whopping increase of 19% versus the fourth quarter of 2012.

Investors were probably expecting weak numbers from Hasbro after rival Mattel delivered a truly dismal earnings report on Jan. 31. Mattel announced a 6% decline in revenues during the fourth quarter to $2.11 billion, and sales of Barbie products fell 13%, while the wheels business, which includes Hot Wheels, Matchbox, and Tyco, declined by 11%.

Mattel probably left the bar quite low for Hasbro, and investors may have felt comforted by the fact that Hasbro is doing better than its main competitor. However, there is more to consider, especially when it comes to Hasbro's prospects in the medium term.

The future
My Little Pony has been a big winner for Hasbro lately, and it reached record revenues during the quarter. Emerging markets are also looking quite promising in terms of growth opportunities; revenues in those regions increased by 25% during 2013 to reach $575 million, nearly 14% of overall revenues.

As for weakness in the boys category, this will most likely reverse in 2014 due to important movie releases. CEO Brian D. Goldner explained during the earnings press conference that weakness in that segment was mainly due to the lack of big movie launches in 2013, but that's about to change in the current year:

The fourth feature film in the Transformers franchise, Transformers: Age of Extinction is scheduled for release and will feature all new characters and storylines. Marvel Studios is releasing two new feature films, including Captain America: The Winter Soldier and an all-new franchise in the making, Guardians of the Galaxy. Sony Pictures is releasing The Amazing Spiderman 2. Finally, Lucasfilm is unveiling all new Star Wars Rebels television programming late in 2014.

Therefore, in addition to the momentum and innovation we are creating in our Franchise Brands, 2014 is just the first year of an unprecedented era of new boys' entertainment which builds over the next several year period with major theatrical releases scheduled for 2015 and beyond.

Hasbro's weakness during 2013 was mainly due to lackluster sales in the boys segment. With new and exciting movie launches coming soon, investors have valid reasons to feel optimistic about the future of the company in that division.

In addition, Hasbro announced an 8% dividend increase, bringing the quarterly dividend to $0.43 per share. This means an attractive dividend yield of 3.3% at current prices. The company also repurchased 2.3 million shares during 2013, and it still has $524.8 million available in the current share repurchase authorizations.

Capital distributions are a sign of financial strength and confidence about the future, and management seems to be quite optimistic about the company's prospects.

Bottom line
Hasbro delivered lower-than-expected sales and earnings for the last quarter. But investors need to look through the windshield, not the rearview mirror, when making investment decisions. The company is attractively valued due to its compelling dividend yield and well positioned for accelerating growth in the medium term. This toy maker is not playing games when it comes to generating returns for shareholders.

Andrés Cardenal has no position in any stocks mentioned. The Motley Fool recommends and owns shares of Hasbro and Mattel. Try any of our Foolish newsletter services free for 30 days. We Fools may not all hold the same opinions, but we all believe that considering a diverse range of insights makes us better investors. The Motley Fool has a disclosure policy.