AIG nearly went out of business in 2008. In nine months, the world's largest insurance company lost more money than it made in the previous 18 years combined.

But something strange happened: During most of this meltdown, AIG kept raising its dividend payout. Three times, in fact. In a year that erased nearly two decades of profits, AIG paid its shareholders $2.1 billion in dividends. It wasn't until the company was taken over by the U.S. Treasury that dividends finally ceased, by congressional order.

"We are being asked why we raised the dividend," former CEO Martin Sullivan said during a conference call in May 2008, after reporting a record loss. "The answer is that the dividend increase is a reflection of ... management's long-term view of the strength of the company's business."

I'm picking on AIG, but this kind of thinking isn't unusual among CEOs. Companies will jump through hoops to avoid cutting their dividends. In aggregate, there's only one clear trend in dividends: They usually go up. Since 2004, S&P 500 companies have raised their quarterly dividends 2,854 times, cut them 168 times, and stopped paying them just 46 times, according to Standard & Poor's. Forty one S&P 500 companies raised their quarterly dividends last month. One company cut its dividend.

This behavior oddly unique to America. Deutsche Bank published a report last decade asking global CEOs how they thought about dividends. Most managers from Europe, Asia, and South America took a pragmatic approach to dividends, and were more than willing to adjust payouts when their earnings were volatile. But American managers responded overwhelmingly that cutting a dividend was to be avoided at almost all costs. The researchers wrote:

After cutting deferrable investment, North American firms would borrow money to pay the dividend, as long as they do not lose their credit rating. Next, they would sell assets at fair value and cut strategic investment. Only if all these actions are insufficient, would they resort to a dividend cut.

It's also a new phenomenon. While reading old finance books, I kept coming across references to investors dealing with the ups and downs of dividends. Yale economist Robert Shiller's database of historical stock returns shows that dividends were wildly volatile. From 1871 through 1920, aggregate dividends fell in more than one-third of all months. From 1920 to 1950, dividends were cut in 23% of all months. Since 1980, they've declined in less than 10% of all months. The era of stable dividends is unique to the last 30 years.

Worse, I think it's destructive to how businesses operate.

I recently came across General Motors' (NYSE:GM) 1925 annual report, which offers a good example of how differently companies use to treat dividends.

GM started paying common shareholders in 1916. Those dividends had more volatility than any company I know of today: 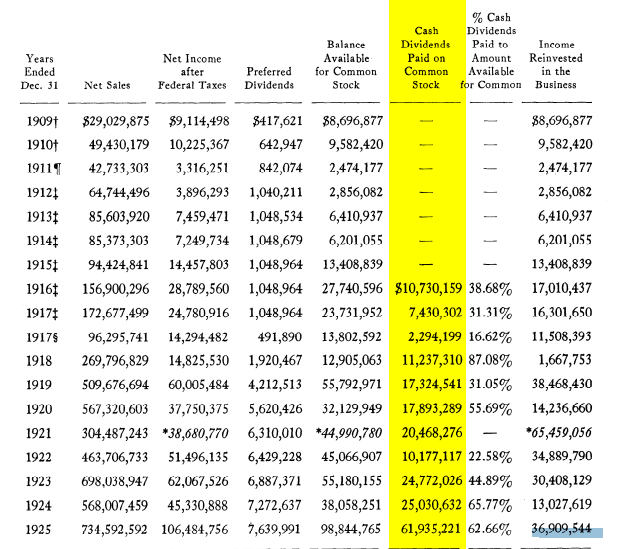 Why were its dividends so wild?

I have a feeling that the conversation among GM's senior leaders in the 1920s went like this: "We made $50 million last year. We need to invest $30 million back into the company to grow. Pay the rest out as dividends." Dividends were volatile based on the profits and needs of the company. It was simple, and it made sense.

Today, given the stability in dividends, I have a feeling the board-room conversations are switched, and are more like this: "We made $50 million last year. We need to pay out $30 million in dividends. Invest the rest back into the business."

The priority used to be investing back in the company, with dividends coming second. Today it's dividends (and, to be fair, buybacks) as a first priority, investment if there's anything left over.

Which does two things.

One, it likely makes overall dividend payouts lower than they'd otherwise be over time. Companies' fear of cutting dividends means payouts must be kept low enough to allow room for variability in earnings. That's why the dividend payout ratio in the S&P 500 (SNPINDEX:^GSPC) is near an all-time low.

Two, it gives investors a false sense of stability, which skews people's perception of risk. I'm sure there were thousands of AIG investors who thought the company was in decent shape in 2008 only because they kept receiving their dividend checks. Had dividends been cut as soon as AIG's business began to deteriorate, investors may have been more attuned to the risk they were accepting. There are several theories in economics linked to the idea that stability is destabilizing, because it gives people a false perception of safety, which causes them to take on too much risk. Stable dividends probably fit that category.

Investing is supposed to be volatile. I wish more companies today looked like GM did 90 years ago.