Intel (NASDAQ:INTC) promised something bold at its latest investor meeting. In fact, it is something that the company has never actually promised about one of its future mobile SoCs. It's also something investors should not only pay attention to, but get ready to hold Intel accountable for.

Some bold words about Broxton
Hermann Eul, the general manager of Intel's Mobile and Communications Group, had this to say about the company's next-generation mobile part codenamed Broxton:

Next year, 2015 – Broxton. That is the high-end product; it will mark leadership in the performance hero devices. It will have our next generation of graphics, it will be in 14-nanometer, and it will be converging our tablet and our high-end phone roadmap.

Intel has never, in this Fool's recollection, promised something so bold about its mobile parts. Sure, it has touted competitiveness and has been vocal about "busting myths" that Intel couldn't compete in this market, but this level of bullishness about a particular mobile product is pretty unheard of from Intel. Either the company really means business with this product, or investors are being set up for a huge disappointment.Broxton should be quite competitive.

Intel's current-generation Silvermont processor core is extremely competitive, outmatching even Qualcomm's (NASDAQ:QCOM) Krait 400. As Anandtech put it, it offers the best CPU performance among the crop of Android-oriented system-on-chip solutions. The next-generation Goldmont core should extend this performance leadership, as Intel has plenty of experience designing high-performance, power-efficient CPUs. It also has a manufacturing technology lead.

The problem, unfortunately, for Intel has been that it hasn't exhibited leadership in the other IP blocks -- graphics, imaging, memory support, etc. Given that system-on-chip products need to be good at everything to be competitive, it is not yet fair to say that Intel really has any sort of "leadership" on a product basis. Intel should become more competitive with Merrifield/Moorefield, but it is unlikely that Intel has a chance at leadership until Broxton. That said, the competition isn't sitting still, either.

Intel needs to leverage its manufacturing lead
Most unfortunate is that Intel had a golden opportunity at the 22-nanometer node to really take the lead. If Intel's SoC designers had taken full advantage of the performance/power advantage that the company had with its tri-gate transistors, then Merrifield/Bay Trail could have been clean kills against the various ARM (NASDAQ: ARMH) vendors stuck on the 28-nanometer planar node. Unfortunately, in this case, better designs on the ARM side overcame a massive process lead on Intel's part -- a tragedy for Intel shareholders, indeed. 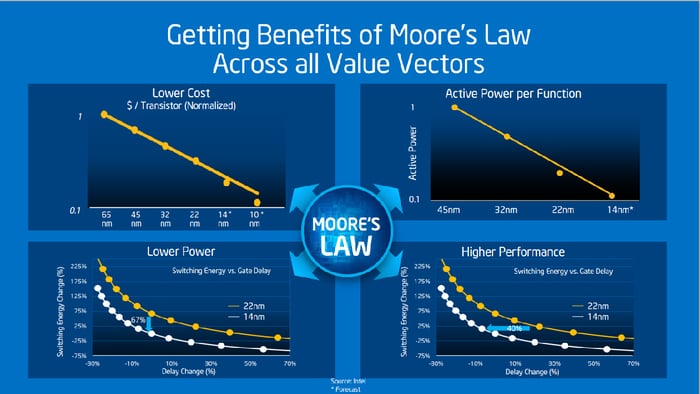 The good news is that Intel's process lead seems to be, if anything, extending at the 14-nanometer generation, as Intel pits its second-generation tri-gate process against 20-nanometer planar process-based chips during 2015. Of course, in order to really win, Intel needs to have world-class IP, architecture, and process. Any missteps on the IP/architecture side, and the ARM vendors will be able to do to Intel at 14-nanometer what they did to Intel at 22-nanometer.

Foolish bottom line
The message to Intel's management is clear: Get your act together before it's too late. The manufacturing lead is there, the cost structure advantage is there, and the CPU experience is there. The SoC needs to be all-around competitive, from the CPU to the graphics to the imaging subsystem. Any blunders that throw off the balance of the entire system are likely to prove fatal to the product's viability in the market, as Qualcomm is very capable in all areas. The battle can be won, but Intel can't afford to keep missing the mark if it ever wants to make inroads.