While Regions Financial didn't have a spectacular year in 2013 when compared to BB&T and SunTrust, it turns out it may have taken the necessary steps to have a great 2014.

A quick glance at the 2013 earnings of Regions Financial (RF -1.73%) may lead an investor to shrug their shoulders and move on to the next regional bank, but that would be a mistake.

Nothing to raise an eyebrow
The bottom line results at Regions were solid, but a bit unspectacular, as the 10% income growth was largely the result of it paying less in dividends to its preferred stock holders.

It would also appeared as though competitor SunTrust (STI) had a tremendously difficult year, with earnings per share falling from $3.59 to $2.41. However, after factoring in various one-time charges and adjustments, it turns out earnings per share actually increased by 25% from 2012 to 2013, moving from $2.19 to $2.74. Regions on the other hand reported just a slight gain from $0.76 to $0.78.

Broad based comparisons are always tricky because of accounting adjustments, but things at Regions left something to be desired when compared to two of its peers.

However, the old adage that the first glance may be deceiving certainly applies with Regions and the CEO gave one critical insight about what the bank did last year that could mean big things for this year.

Back to the basics
On the earnings conference call, Regions CEO Grayson Hall began by noting (emphasis added), "Overall, we are pleased and encouraged by our achievements and results in 2013. During the year, we focused on the fundamentals: serving the financial needs of our customers and communities, and building stronger relationships with them."

Often in sports, there is a call to refocus on the basic elements. Consider the often repeated quote from football legend Vince Lombardi, "Some people try to find things in this game that don't exist, but football is only two things-blocking and tackling."

And if you're looking at Regions with a short-term perspective, it won't look like a world-beater, but looking instead at its foundational core potential, the results are much more impressive. 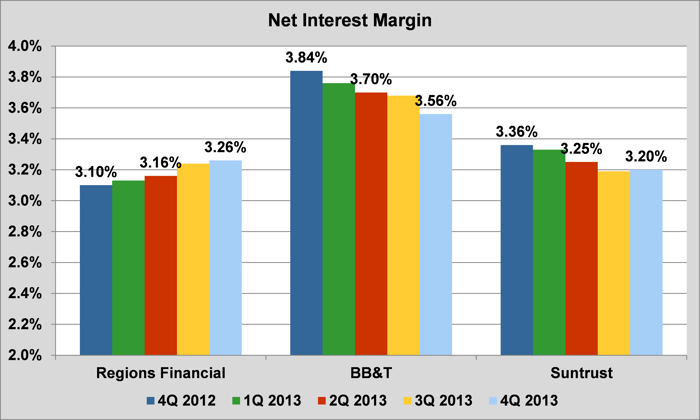 Yet not only did it improve the foundational bank profit metric of net interest margin, but Hall also highlighted "total new and renewed loan production increased $4.5 billion, or approximately 8%," at Regions, and the bank was also able to raise its dividend.

Certainly the improvement in one metric would not necessitate an investment decision, however, in the case of Regions, it is critical to see its focus last year was to improve the foundation of its business, which it did. Looking ahead, this could mean 2014 is a year where it is able to build on that foundation and deliver solid results, making it one bank to keep an eye on.