Over the past several months, shares of Seadrill, Atwood Oceanics, Transocean, Noble Corp, and even National Oilwell Varco have been hammered, largely on fears that there is an impending situation of oversupply in offshore rig capacity. While this could be true, it won't affect all rig operators equally.

Investors in offshore drillers have been taking a beating for several months now. Atwood Oceanics (ATW) is down 18% and Seadrill (SDRL) is down more than 22%, while Noble Corp (NEBLQ) and Transocean (RIG -2.87%) haven't fared much better. Even massively diversified oilfield services company National Oilwell Varco (NOV -5.17%) is down more than 8%, partially on worries of oversupply of rigs: 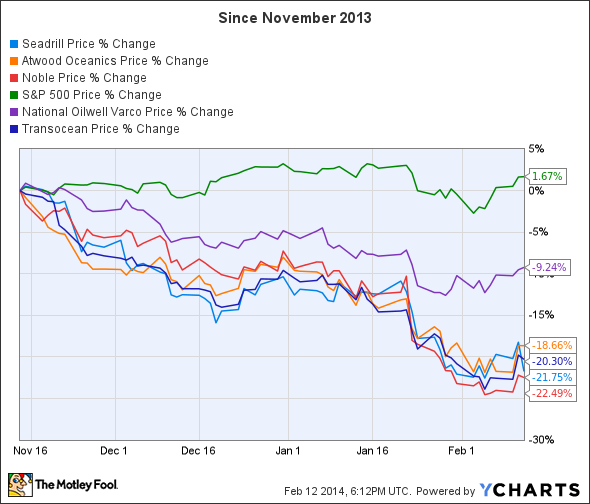 While the industry is indeed building a lot of rigs right now, which will likely put pressure on dayrates -- especially if there is any letup in demand for offshore production -- making the assumption that all rig operators are set up to suffer over the next few years ignores a big part of the story. Let's take a look below the surface, because there's definitely opportunity for the right operators.

All rigs not created equally
This is at the crux of what's happening in the industry. Growing amounts of offshore oil and gas are being found in deepwater and ultra deepwater, where the majority of the world's rigs are unable to reach. This is largely what has driven Noble, Transocean, and Seadrill to invest heavily in high specification units over the past few years.

Transocean is the heavyweight in the industry with 79 ships in its fleet, and the most high-spec ships in operation. Additionally, the company is building 12 new ships -- seven of which are ultra deepwater drillships -- in order to further add to its capacity in deepwater and ultra-deepwater. However, the company also has the largest fleet of older rigs as well, which could mean a larger percentage of its fleet idle in coming years.

Atwood Oceanics lists 17 ships in its fleet, of which only 13 are completed. The four that are still in some phase of planning or construction are all ultra-deepwater drillships, of which the company currently operates none of. Once completed, these ships could significantly increase the company's cash flow and income, due to the very high dayrates these ships command -- it can easily exceed $500,000 per day -- for ultra-deepwater drilling. But until then, its older fleet of jackup rigs could lead to short-term pains.

NOV is embedded in every area of oil and gas production, including speciality vehicles from subsidiary Rollington. Source: NOV

Not just a rig builder
National Oilwell has the most diversified business in the oil and gas universe. The company manufactures just about every kind of machine, part, or component for every segment of the business, from production to transportation, and every step in between. For NOV, as the company is called, this diversity of offerings -- many of which it has very little competition in -- have let to the company being called "No Other Vendor" by many. So even with the softness in the offshore rig business, the company's diversity will probably mean great things, especially as global investment in higher production expands in the coming decade.

Driller #1: Most advanced fleet
Seadrill has poured tons of money into building out what, by most accounts, is and will be the most advanced fleet of rigs of any operator. The company's fleet of 69 ships is largely new, and of the total, 22 are still in some stage of construction. What makes Seadrill compelling right now is actually a combination of two things: the advanced nature of the fleet; and management's track record at securing contracts for its newbuilds.

While Seadrill's stock has taken a beating over the past few months, the business itself has continued to perform well. As each of these new ships enter service, in many ways it actually reduces the company's risk versus competitors like Transocean. Transocean's large fleet of high-spec ships could be weighed down by its lower-spec ships which will be displaced by higher-capacity, safer, and more effective newbuilds from Noble and Seadrill, among others.

The Noble Don Taylor is one of several Noble drillships that can drill to 40,000 feet, in 10,000 feet of water. Source: Noble

Driller #2: Spinoff could unlock value, clarify opportunity
Noble Corp announced last year its intention to split itself into two companies through a tax-free spinoff and IPO of its legacy, standard-specification fleet as a new, stand-alone company. Shareholders of record will receive some combination of shares in the new company as a tax-free distribution, meaning investors could choose to proceed as owners of both, or just one or the other as they chose. For the businesses at hand, having clear goals and positions in the offshore market would make it easier to manage and grow both businesses. Oftentimes, this sort of action leads to an "unlocking" of value for investors, due to greater clarity of fair market value for shares based on an easier understanding of the business, its opportunities, and challenges.

Final thoughts: Keep the long view
While there is definite short-term risk that shares could fall more, the long-term picture looks good for Seadrill, and likely the same for Noble -- especially after the spinoff of its older ships. The offshore operators with the newest and most capable fleets will be the ones getting the most business, which points strongly to Seadrill and Noble, while Transocean's legacy fleet, and Atwood's large percentage of jackups, versus its yet-to-arrive deepwater drillships, could weigh on the companies for a while.

However, when measured in terms of years and years, the one guarantee that we have is that global demand for oil and gas isn't letting up. And with about half the world's most recent discoveries in deepwater, the companies with the best and most capable ships are most likely to lift the highest on the rising tide. Today, Noble and Seadrill look best positioned for that future.