In the battle of the market caps, the two largest players in the semiconductor space are Intel (INTC -1.41%) and Qualcomm (QCOM -0.91%). Intel is the world's largest semiconductor vendor by revenue, driven principally by its near total ownership of the PC and server chip markets while Qualcomm is the dominant smartphone modem and applications processor vendor. While Intel generates more revenue/profit than Qualcomm, Qualcomm continues to power ahead – extending its lead as the world's most valuable semiconductor company.

Weighing in our competitors
Taking a look at both of these competitors, it's clear that the market values Qualcomm at a non-trivial premium to Intel with the former weighing in just shy of a $128 billion market capitalization and the latter just shy of $122 billion. 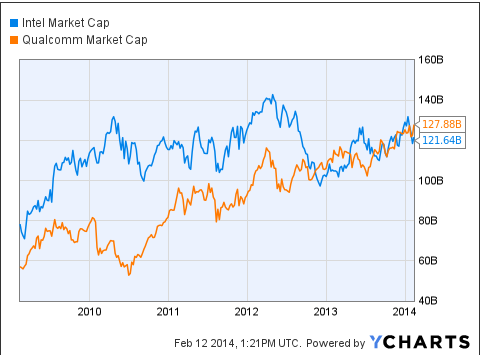 A deeper look at valuations
So, on a market cap basis, Qualcomm is indeed worth more than Intel, but on a pure enterprise value basis, Intel is the more valuable one. To try to get better perspective on which business is cheaper, it's worth taking a look at the enterprise value to free cash flow for both companies. Free cash flow is cash from operations less capital expenditures. 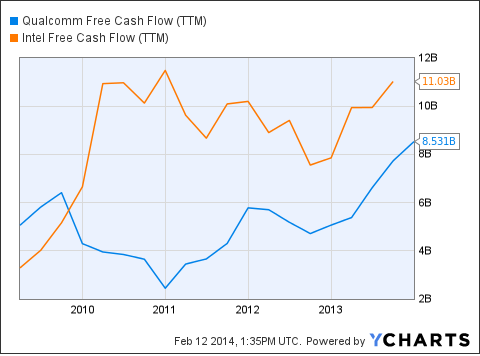 Intel trades for 10.42 times EV/FCF while Qualcomm trades for 11.25 times EV/FCF, suggesting that while Qualcomm's business is valued at a slightly richer multiple, they are both within the same ballpark. This is actually interesting considering that Intel's core PC business is in secular decline, its mobile division burns cash like there's no tomorrow, and its datacenter group isn't experiencing anywhere near the kind of growth that management has expected in the past. That said, there's a tremendous amount of leverage to be had if the company's mobile investments pay off.

Qualcomm, on the other hand, continues to see robust growth in its wireless licensing business as well as growth in mobile apps processors, modems, and various connectivity components. Margins have been a pain point for the component business, but Qualcomm has made it very clear that its next generation of products will be engineered specifically to keep cost structures in check. Qualcomm has also been trimming the fat on its operating expenses.

Both are cheap, but which one is worth owning?
Qualcomm seems to be trading cheaply as fears of margin compression for its chip business begin to become an issue over the next 6-12 months as competition intensifies in the LTE space. Intel's shares trade cheaply as the market worries that the firm's PC revenues will continue to decline for many years to come. That said, Intel probably has more upside potential as traction in mobile, traction in foundry, stabilization in PCs, and a return to double-digit growth in servers could catalyze some pretty serious upside.

In short, Qualcomm is the winner today and is more likely to trade right alongside the market, while Intel – which has lagged the market for years – could see a dramatic repricing if it executes well in its new growth areas and if the PC market stabilizes. There are a lot of "ifs" in the Intel story whereas there aren't as many for Qualcomm – but this, ironically enough, is what creates the opportunity for bigger-than-market returns.

Why Taboola Stock Skyrocketed This Week

Here's My Top Growth Stock to Buy in December
376%