The nor'easter that just paralyzed Atlanta and is now barreling up the East Coast promising to dump a foot or more of snow in some areas will provide the perfect foil for retailers, builders, and manufacturers looking for something to pin blame on for lousy sales and earnings.

McDonald's (MCD -0.66%), after all, just used last month's winter weather as an excuse for yet another month of disappointing sales at its burger joints -- but blaming cold and snow is nothing new, as companies have used it as a crutch to deflect attention from their poor numbers for the past few months.

December's cold snap, for example, was alleged to be the cause for the collapse in pending home sales, which tumbled almost 9% from the month before, according to the National Association of Realtors, while Wal-Mart said "eight named winter storms resulted in store closures" that hurt its results last quarter. That was followed earlier this month by Ford and General Motors witnessing a 7% and 12% decline in monthly sales, respectively, well below expectations, because of January's "extreme weather" patterns.

But heck, even the Bureau of Labor Statistics says a lot of people were affected, too, and decided not to go to work because of the weather. 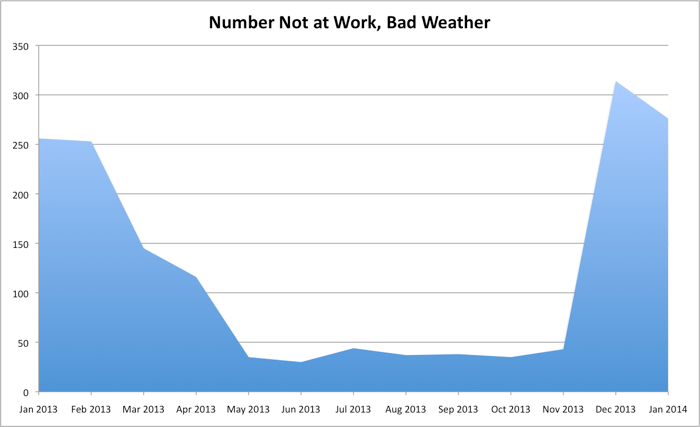 Yet not everyone got the memo that they were supposed to blame the weather. Chrysler and Mercedes seemed to have avoided the same pitfalls as their U.S. rivals, and Wendy's (WEN 0.43%) reported solid fourth-quarter preliminary results last month that had nary a mention of cold, snow, or all the other attributes that typically come with winter. North American same-store sales rose more than 3% versus a 2% decline the year before (when we also had winter), and though total sales were lower than last year, that was due to having fewer stores, as it optimized them by selling them to franchisees.

Burger King Worldwide (BKW.DL) is set to report its end-of-year results tomorrow, when we'll get to see whether its customers wore snowshoes or chose to ride out winter at home.

The problem for McDonald's and much of the rest of American business and industry isn't necessarily of their own making, but comes as the U.S. consumer is under tremendous pressure from rising costs, higher taxes, lower economic expectations, and a business climate wary of the impact government policies will have on the future. It was just such concerns that lead President Obama to delay once again implementing key provisions of his signature health care law.

Yet McDonald's has also stumbled over its own feet, too. Its "Dollar Menu & More" option providing choices for $1, $2, and $5 was seen as key to boosting profits without completely alienating customers who've come to rely on the discount menu for cheap meals. That apparently isn't gaining the traction the company hoped it would, nor has the healthier fare it's been substituting, such as side salads, fruit, and vegetables. With store traffic falling 1.6% at existing restaurants, the burger chain should have known from its failed dalliance with its "Extra Value Menu" that menu (and price points) expansion was a dicey proposition.

However, both Wendy's and Burger King also sampled new menus and new products, with the former especially hitting it big with its Pretzel Pub Chicken Sandwich (though not so much with the Flatbread Grilled Chicken Sandwich). They've also introduced healthier menu items, but I think that's a fad that will wither once again, just as it did the last time burger palaces tried it.

It all points to intense competition for limited discretionary spending, and by and large the restaurant industry is finding customers are flocking to the fast-casual dining space that's seemingly achieved the perfect balance of pricing, quality, and ambience. Even convenience stores are nibbling away at fast food's quickly declining dominance.

No doubt the snow and cold that have gripped much of the country this winter have had an impact on sales, but if Chrysler can still sell cars and Wendy's can still flip burgers, then it means there are problems facing the other companies that go beyond mere weather. So even though Wendy's trades at twice the valuation of McDonald's based on estimated earnings, it may still be the better investment until McDonald's proves its business is no longer in a deep freeze.