Year-over-year growth at Cerner (CERN) appears to be losing steam. However, a number of growth opportunities remain.

Cerner's (CERN) fourth quarter results showed signs of slowing growth compared with a year ago, prompting a slide in Cerner's shares as investors consider whether Cerner deserves its lofty valuation.

However, Cerner's future may not be as bleak as investors' initial reaction makes it seem to be. Industry IT spending is expected to grow by 8% annually to $185 billion by 2018, up from $110 billion in 2012. That suggests there's still plenty of room for Cerner to compete for business against other vendors including Epic, McKesson (MKC 1.71%), and Allscripts (MDRX 2.99%). As a result, shares are bouncing back on hopes that sales momentum will reexert this year. 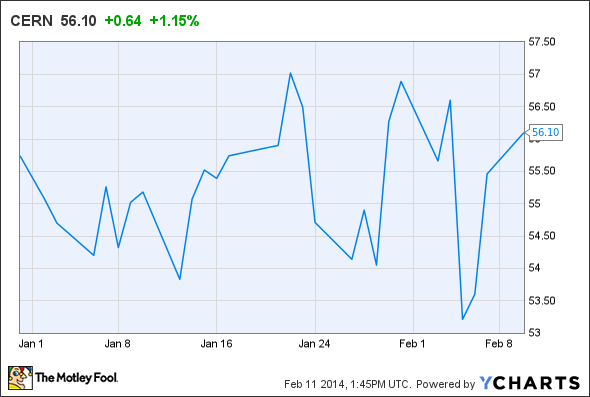 Deceleration risks
Cerner's full-year sales grew just 9% in 2013, and the company's guidance for 2014 appears disappointing, given expectations for $3.2 to $3.4 billion in sales tilts to the light side of industry watchers' prediction for $3.35 billion in revenue. Cerner's earnings guidance of $1.62 to $1.67 per share versus the Street consensus outlook for $1.67 is similarly tame.

Unfortunately, tame may not be good enough for investors. The company is trading at 29 times forward earnings, and the prospect of deceleration may make investors reconsider their willingness to pay up for future earnings. In this respect, Cerner may be a victim of its own success. Thanks to regulatory incentives, providers have been rushing to upgrade and implement health-care IT systems. Large providers were among the earliest adopters of technology, which was a boon for Cerner. However, with many of those customers now having implemented systems, it's getting increasingly difficult to maintain high-double-digit sales growth. Sales growth peaked near 30% at Cerner in 2012 but has since trended down to the low single digits. Earnings growth, which peaked near 40% in 2012 and has since dropped off into the teens, is following a similar path.

Finding silver linings
To be fair, it wasn't a gloomy quarter. Revenue did climb 12% from a year ago, and earnings per share of $0.39 matched analyst estimates and came in above the $0.34 earned a year ago. And while the pace of bookings in the fourth quarter may be weaker year over year, full-year bookings revenue grew 20%, outpacing the 15% rate for 2012. As a result, the company's backlog improved by 23% to $8.9 billion, up from 19% growth to $7.27 billion in 2012.

The full-year picture may suggest Cerner continues to successfully compete against Epic, McKesson, and Allscripts. Epic remains the biggest vendor, but both McKesson and Allscripts have struggled to maintain their market share and are reducing choices for smaller providers. There's also the opportunity to win business from providers switching their EHR vendors. According to a Black Book survey a year ago, 17% of physicians using an EHR system are considering a switch.

Since a lot of those considering a switch cite unresponsive vendors or usability issues, it would seem a great opportunity for an attentive sales team to pitch a competing option. If Cerner plays its cards correctly, it could win a fairly good amount of business. Cerner's share of hospitals and professionals attested to 2014 meaningful use certification is just 14% among hospitals and 3% among professionals. For comparison, McKesson's and Allscripts' market share of hospitals is 10% and 4%, respectively. The two companies' market share among attested professionals is 2% and 12%, respectively. So there are plenty of chances to win conversions.

Fool-worthy final thoughts
The big question may be whether Cerner is positioned to win away that business. During the most recent KLAS industry ranking, Cerner was given two best-in-class awards, including best in application hosting and in community health care information systems. That wasn't nearly as impressive as the 10 best-in-class awards given to market share leader Epic. However, McKesson won only one, for financial reporting, and Allscripts came away empty-handed. Based on those awards, it's likely Cerner won't unseat Epic as the top vendor this year, but it may have an opportunity to win away business from McKesson and Allscripts.

Todd Campbell has no position in any stocks mentioned. Todd owns E.B. Capital Markets, LLC. E.B. Capital's clients may or may not have positions in the companies mentioned. Todd owns Gundalow Advisors, LLC. Gundalow's clients do not have positions in the companies mentioned. The Motley Fool has no position in any of the stocks mentioned. We Fools don't all hold the same opinions, but we all believe that considering a diverse range of insights makes us better investors. The Motley Fool has a disclosure policy.