With a distribution that currently yields about 11.2%, QR Energy L.P. (NYSE: QRE) certainly has the attention of income-seeking investors. That yield is one of the largest among its MLP oil and gas peers. At first glance, it might seem a bit too large; so let's take a closer look at some of the company's key metrics to see just how safe the company's monthly distribution really is.

Production
In order to determine if QR Energy's cash flow and, therefore, distribution are secure, we need to know where its cash is coming from. The following chart takes a closer look at the company's production mix relative to some of its peers.

Hedging
While oilier production is earning Legacy Reserves and QR Energy more cash flow now, that cash flow is only as secure as the price of oil. Because oil prices can be volatile, MLPs typically hedge a good portion of the volumes to lock in the cash flow. The following chart puts the safety of each company's oil cash flow into perspective. 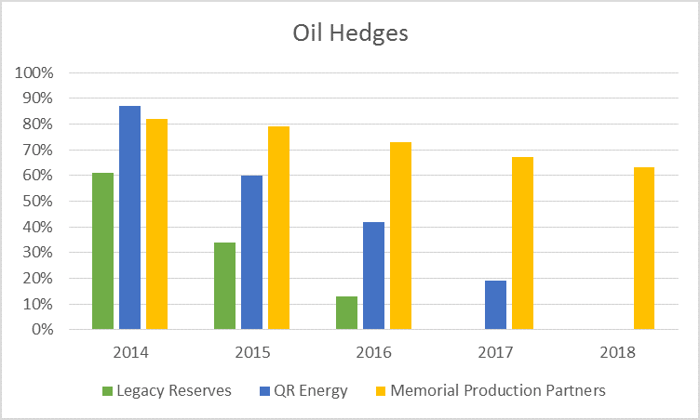 Meanwhile, when it comes to natural gas volumes, Memorial Production Partners is by far the most hedged as the following chart shows. 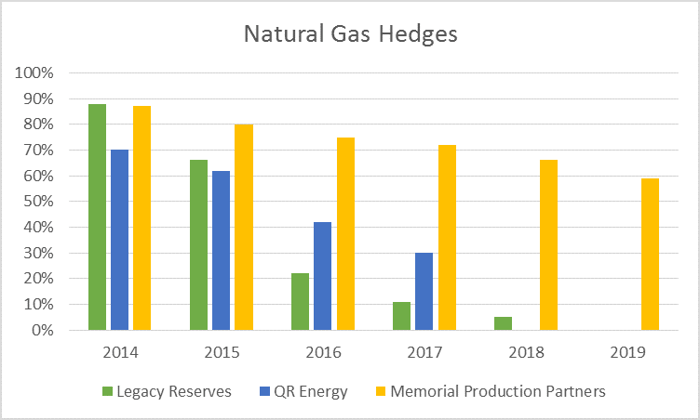 Here we see that Legacy Reserves and QR Energy are fairly even when it comes to hedging the roughly 30% of production that's natural gas. This area isn't as important to either as it is to Memorial Production Partners, which has wisely hedged a bulk of its natural gas production for the long term, which will help secure the largest portion of that company's cash flows. That said, QR Energy's cash flows, especially its important oil cash flows, are pretty rock solid.

Balance Sheet
The final area that needs a closer look is the balance sheet. Here is the area where investors might have some concern that QR Energy's distribution could take a hit in the future. Take a look: 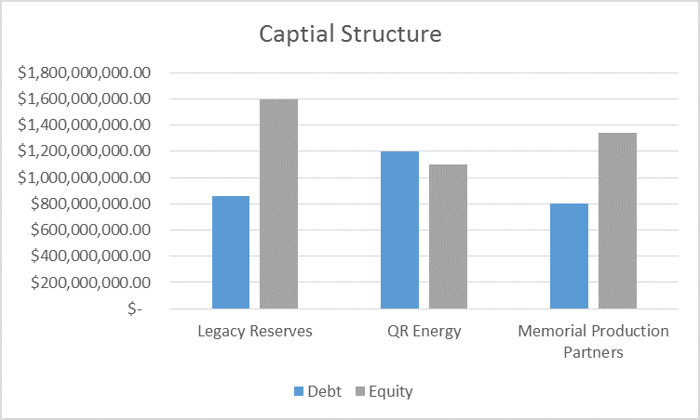 Notice that both Legacy Reserves and Memorial Production Partners have lower debt-to-equity levels. That enables both companies to more actively acquire new oil and gas reserves, as either company has more flexibility to issue debt to grow. QR Energy, on the other hand, is a bit debt heavy. While the company notes that it has about $350 in liquidity, this is an area to watch, as a credit crunch could have an impact on the company's ability to pay its distribution to investors.

Investor Takeaway
QR Energy has oil-rich cash flows that are fairly secure thanks to its robust hedging program. That adds a nice layer of security to the company's near 1% per month distribution to investors. However, its capital structure is a bit heavy on the debt side, which means that investors are taking on a bit more risk to earn such a high payout.