Biogen (BIIB) would love a repeat of 2013, but that depends on approvals and the pipeline.

It's been a great year for Biogen (BIIB -2.06%) investors. Shares in the company have more than doubled as sales climbed more than 25% to nearly $7 billion in the past year.

A lot of that success is thanks to surging sales for its new oral MS drug, Tecfidera. Despite recently receiving approval last March and competing against drugs from Novartis (NVS 1.08%) and Sanofi (NYSE: SNY), Tecfidera posted sales of more than $800 million in 2013. Following up that success is going to be tough, but here's why Biogen may reward investors again in 2014. 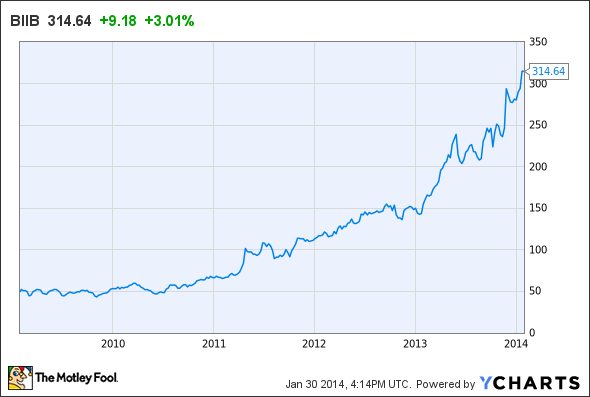 More launches may be coming
Biogen enters the year with a lot of momentum and plenty of opportunity, including the launch of Tecfidera in Europe, an event I wrote about previously here. If price negotiations with European regulators go well, Tecfidera could eventually generate a billion or more in sales annually for Biogen.

However, some of Tecfidera's potential success is likely to be offset by sluggish sales for Avonex, Biogen's top-selling legacy MS drug. Avonex is facing stiff competition from Novartis' fast-growing Gilenya -- a drug that outperformed Avonex during trials -- and Sanofi's Aubagio. Additionally, some of Avonex's sales are likely be cannibalized by Tecfidera.

That suggests Biogen might need another new product to really move the needle. Fortunately, Biogen may launch three new therapies this year. Two of those new treatments target hemophilia, a rare bleeding disorder occurring in roughly one of 5,000 males born each year. Those with hemophilia lack clotting factor proteins necessary to stop bleeding, which means the disease can cause life-threatening organ damage.

Currently, hemophiliacs are treated on-demand or prophylactically by blood transfusions or clotting drugs including desmopressin or Lysteda. However, desmopressin's effectiveness decreases with use. In severe cases, plasma or recombinant is regularly infused into the bloodstream as replacement therapy. However, replacement therapy isn't ideal, since the body removes half the infused clotting factor every 12 to 24 hours.

Biogen thinks Eloctate, its new drug for Type A -- the most common form of hemophilia -- may offer a better solution. In phase 3 trials, Eloctate reduced or prevented bleeding episodes when given once or twice a week.

Biogen hopes Alprolix, a treatment for those with the less common type B form of the disease, wins approval this year, too. In phase 3, patients treated with Alprolix saw a reduction or prevention of bleeding episodes when dosed either weekly or biweekly. If Biogen wins FDA approval for Alprolix, it will become the first long-acting therapy for hemophilia on the market -- arguably the biggest advance in hemophilia treatment in more than a decade.

The third of Biogen's three potential launches this year is Plegridy, a peg-interferon MS treatment filed for FDA approval last May. Plegridy put up solid data in late-stage studies, showing a 36% reduction in MS relapses versus placebo. Plegridy's favorable dosing regimen has Biogen thinking it could become a top seller. Industry analysts, who are predicting peak sales could eclipse $2 billion a year, seem to agree.

And one more thing to consider
In addition to those drugs, Biogen will also start receiving royalties on Gazyva this year. The drug, which was co-developed with Roche, will be dosed alongside chemotherapy as a treatment for previously untreated patients with chronic lymphocytic leukemia, or CLL. The drug will be marketed by Roche's successful Genentech oncology sales force, a team already capturing billions in revenue selling Herceptin and Rituxan.

Gazyva proved more effective than the blockbuster Rituxan in CLL patients during trials, helping patients live a median 26.7 months versus 15.2 months for patients treated with Rituxan. Importantly, 21% of Gazyva patients rid themselves of the disease, while just 7% of Rituxan patients saw a similar benefit.

Biogen could reap a handsome pay-off if Roche succeeds in marketing Gazyva as an eventual replacement for Rituxan, given that Biogen will collect a handsome 35% to 39% royalty and Rituxan produced $7 billion in sales during 2012. Currently, industry watchers peg Gazyva's peak sales at roughly $1.5 billion a year by 2018. Gazyva's potential and the possibility for new drug launches suggests this year could be another strong one for Biogen investors.