Please ensure Javascript is enabled for purposes of website accessibility
Log In Help Join The Motley Fool
Free Article Join Over 1 Million Premium Members And Get More In-Depth Stock Guidance and Research
By Rupert Hargreaves – Feb 12, 2014 at 10:25AM

Bottom fishing is risky tactic that can go seriously wrong; Barrick Gold, Newmont Mining, and Harmony Gold are great examples of this.

"Bottom fishing" is a term used by some investors and traders who try to guess when a declining stock will hit bottom and begin a turnaround. Unfortunately, the tactic of bottom fishing gold mining stocks has, for some, had disastrous consequences. For example, even though Barrick Gold (GOLD 3.39%) has been trading at its lowest P/E multiple in a decade for some time now, the company's share price and valuation continue to decline. Further, Harmony Gold (HMY 3.55%) has been trading significantly below its book value for almost a year now, and despite the recent release of Newmont Mining's (NEM 3.25%) relatively upbeat trading statement, the company's shares have dropped a painful 10%.

Don't jump in too soon
There have been some signs emerging during the last few months that have pointed to a turnaround in the gold mining industry. Costs have been falling and output has been rising, as Newmont's full-year production report confirmed at the end of January. However, following this report Newmont's shares slumped more than 10%, which shows that despite improved performance, investors cannot trust the market to support the gold mining industry's turnaround just yet.

In addition, Newmont revealed that it had divested $600 million of non-core assets throughout the period and gold production for 2014 was going to be in the region of 5 million to 5.3 million ounces. The company was targeting an all-in sustaining cost, or AISC, per gold ounce of $1,075 to $1,175. This AISC figure is below the $1,100 to $1,200 figure reported for 2013. Newmont is also planning on reducing operating expenses by 20% throughout 2014.

All of this is good news -- falling costs and rising gold production are great for profitability in the long term. Nevertheless, the market didn't see it this way, proving to investors that, as of yet they can't fully commit to the company's turnaround.

Low valuations
Meanwhile, so-called bottom fishers and value investors will argue that gold miners are trading at valuations lower than those seen in the midst of the financial crisis, or indeed at any point in the last decade. Barrick Gold, for example, has been trading at its lowest valuation in a decade for more than three years now. However, any investors who bought into the company based on this low valuation looking for a turnaround have been sorely disappointed.

What's more, if you'd purchased Harmony Gold, another miner trading at an astonishingly low valuation, you would be sorely disappointed. 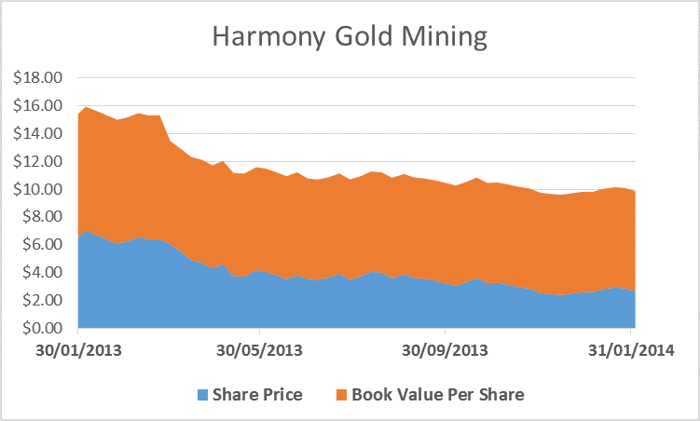 Source: Yahoo! Finance. Book value per share taken as a moving average based on quarterly figures.

But despite these low valuations, which as of yet show no signs of shifting, for the long-term investor things could be starting to look up.

If you're prepared to wait
Harmony's drive to cut costs has actually been more impressive than that of Newmont as the company has had to grapple with a volatile South African labor market. A combination of lower costs and higher output helped push Harmony's AISC down 19% in the third quarter of last year, followed by a further 3% drop in the fourth quarter. At the end of the fourth quarter Harmony's AISC stood at $1,222, down 16% year on year from $1,459 per ounce at the end of December 2012.

Also working in Harmony's favor is the current turmoil in emerging financial markets and unrest in South Africa, both of which have sent the South African rand to a 10-year high against the dollar. As a result, the price of gold, expressed in South African rand has rebounded to levels not seen since 2012 -- great news for Harmony, as the company pays its workers in rand, which implies that costs will drop further over the next few months.

Barrick is also working to streamline its operations, and I'm looking forward to seeing how this company fares throughout 2014. The most recent move by Barrick to streamline and reduce costs was the divestment of the company's 33.3% interest in the Marigold mine, which is jointly owned by Goldcorp.

Still, there's one thing you can be sure of: Trying to find a bottom in the share prices of these miners is not an easy task, and attempting to time a turnaround in gold miners could lead to more pain ahead for investors.