With Valentine's Day around the corner and three V-Day films hitting theaters, it begs the questions if the romance genre is still pulling a profit in February.

This weekend three Valentine's-centric films will make their way to theaters across the country. The trio range from a romantic comedy to a teen drama to one with a strong fantasy element.

Yet this Valentine's Day triple threat is very rare -- studios haven't traditionally loaded up on this genre over this timeframe as one might expect.

The assumption would be that romantic comedies would be a natural and profitable fit for release during February -- after all, romantic comedies and dramas still perform well overall, and everyone's in the mood for love on Valentine's Day, right? But do romantic February releases perform for studios?

I looked at 15 films released on or around Valentine's Day within the romance genre to answer that question. The results were a little surprising.

Looking at the grid below, you can see the 15 romance-themed movies that have hit theaters in February since 2004. Like this weekend's offerings, they touch on all areas and include such notable movies as 50 First Dates, Hitch, and The Vow.

There are a couple outliers -- I couldn't find a budget number for Something New, and Hitch was profitable enough to skew the results. In fact, according to The-Numbers.com (where I found most of these numbers), Hitch is the seventh-most profitable rom-com of all time. Overall though, the results yield similarities. 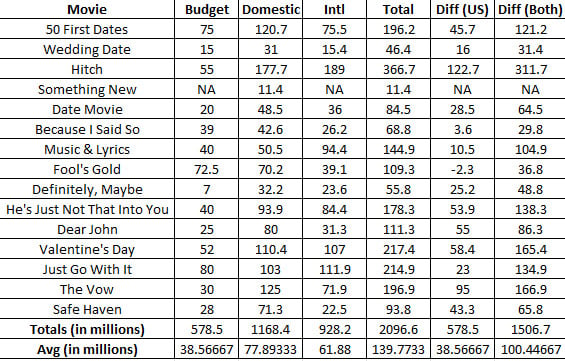 If you throw in the film's international cume, the median total gross rises to $139.7 million, shooting the total profit up dramatically to $100 million, traditionally the key milestone for a movie's success.

It's not that the international markets bring in more revenue on average, but they help balance the score. It's the same thing with 3D movies. Domestic audiences are beginning to tire of the third dimension, but the international crowd can't get enough of it! Look at 47 Ronin, which bombed here in the states with $38 million but just crossed the $100 million overseas. While it still won't recoup its massive (and mind-blowing) $175 million budget, profitability isn't as far away as it once was.

Getting back to the V-Day flicks, it's clear that without the international market goosing the numbers, the studios aren't turning the same type of profit you might think. Being in those extra markets causes the number of $100 million-earning pics to significantly increase. But if you remove the outlier (Hitch), domestic earnings drop to $30 million and the international bump doesn't come anywhere near that magic $100 million mark. It's not that $30+ million isn't a lot of money, it's that making a $30 million profit on a film domestically could give some executives pause about what to green-light, especially when you throw in marketing and promotional costs that eat into its profits.

The other interesting numbers relate to comedy versus drama. Given the breakdown is 12 to 3, it's not a fair comparison. But if you go back to 2005, it's clear what direction studios are going and what audiences' tastes now look like.

Take 2010's Dear John, which was a big hit when it made $30 million opening weekend. Star Channing Tatum then followed up in 2012 with The Vow, which had an even more impressive $41 million take around the same timeframe.

Looking at just Dear John, The Vow, and Safe Haven you can see an average profit of $64.3 million domestically and $106 million when you include foreign markets. Comedies on the other hand pull in far less with $25.6 million in the states and $79.1 when taking overseas into account.

Again you're looking at radically different sample sizes so it's not a reliable comparison, but given the move to dramas (and two of this week's three films are more on the dramatic side), this could be a trend to look at going forward.

I'll take a look at the results after the weekend to see if these movies earned the love of audiences … and their studios.