The economy is still growing, but not as quickly as some investors might like. The worst news came from the electronics sector, as other retailers held up respectably well.

January's retail sales figures were pretty weak when you look at them from a very narrow perspective, but perhaps not so bad when you take a broader view. The U.S. Department of Commerce's morning release of national retail and food-service sales estimates showed a 0.4% decline in overall retail sales from December to January, which was on the heels of December's downward revision from a 0.2% improvement on November sales to a 0.1% loss. This is the weakest month-over-month performance by the U.S. retail sector for the month of January since 2007: 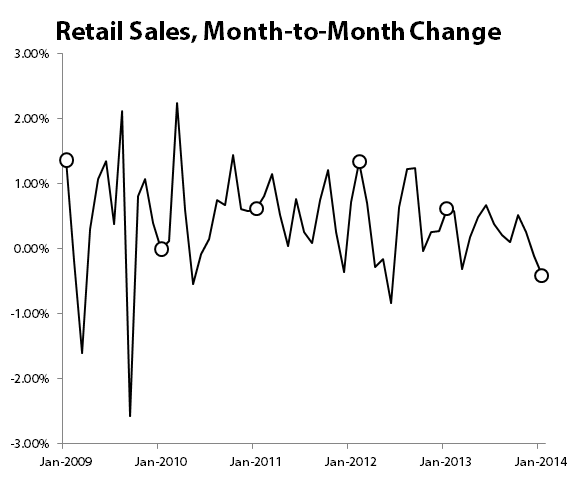 However, year-over-year results weren't quite so bad, as overall retail sales in January improved by 2.6% from 2013's figures, and the holiday season (November to January) saw a 3.4% improvement over the 2012-2013 holiday period. The problem with this assessment is that on a year-over-year basis, January's results merely continue what is now a multiyear trend toward weaker annual growth: 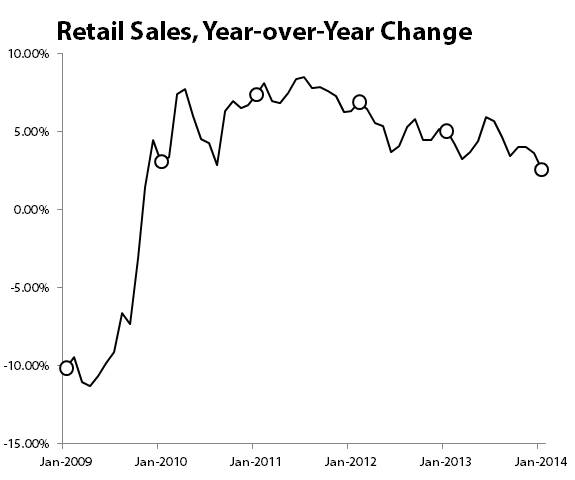 The Dow Jones Industrial Average (^DJI -0.56%) has largely shrugged off the early scare of this retail report as investors assess all available data; except for American Express (AXP -0.06%), all Dow components typically connected with the retail industry are moving higher this morning. Even Wal-Mart (WMT 0.62%), the great bastion of low-cost American commerce, has been unaffected by January's weak report -- but since both food and beverage stores and general merchandise retailers (two of Wal-Mart's core categories on the Department of Commerce's retail classification scheme) outperformed January's 0.4% decline with a 0.2% gain and a 0.1% decline from December, respectively, it appears that the megaretailer's performance has likely outdone the broader economy. On a year-over-year basis, food and beverage retail offset weak general merchandise retail: the former category grew 4.3% from January 2013, while the latter grew only 0.2%.

However, there's one sector that stands out for an ugly, ugly January against all other retail sectors: electronics and appliance stores posted a 0.4% improvement on December's results, but on a year-over-year basis the sector shrank by 4.7%. January's gain was a rare one for this moribund sector, which has spent as much time shrinking as it has growing in recent years -- total industry sales in January were about the same as they were in January 2005! Since results aren't adjusted for inflation, the electronics sector actually moved 17% less merchandise this month than in the same month of 2005. 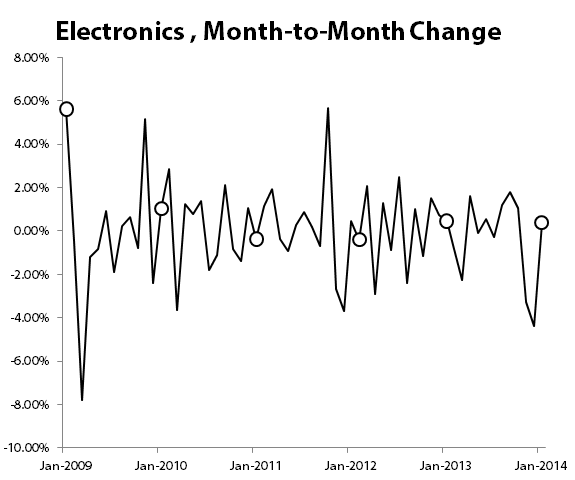 Sector leader Best Buy (BBY 1.37%) is only slightly more than 1% lower today, but the company's stock (and that of peer hhgregg (HGGGQ)) has been battered so badly over the past month by weak earnings reports that investors were already prepared for this disappointing news. These two stocks are already among the year's worst performers, as both have fallen more than 35% since the start of 2014.

The retail environment may be weakening, but it's still in (slow) growth mode today. That's enough to keep markets nudging higher for the time being.

The Motley Fool recommends American Express. We Fools may not all hold the same opinions, but we all believe that considering a diverse range of insights makes us better investors. The Motley Fool has a disclosure policy.