hhgregg, Qiwi, and J.C. Penney collapsed in January. One of these three might be ready to run again.

No one wants to own a stock that's falling, but if you invest long enough, it's inevitable -- even the best investors have had their share of stinker stocks. But just because a stock is hurting today doesn't mean that it's bound to drag your portfolio down forever. It's important to distinguish between stocks that are on their way to oblivion and those that are simply waiting for the right piece of news to soar again.

Today we'll be taking a look at three of the stocks with the worst losses on the market over the past month of trading. They might have just become great investments, but the reasons for their collapse might also have made them too dangerous for your portfolio. We won't know until we dig deeper, so let's get right to it.

hhgregg
The electronics-retail bloodbath enters its third consecutive week, as second-tier appliance superstore hhgregg joins Best Buy (BBY -3.51%) and GameStop on our list of "worst stocks of the past month," which is updated each week. However, unlike the sharp drops suffered by its peers after months of strong gains, hhgregg has endured months of steady declines capped by two big down days in January: 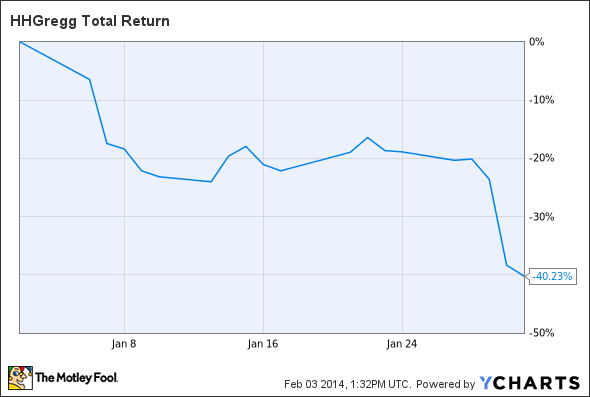 The first fall came after hhgregg released a disappointing preliminary holiday sales report that showed an ugly, ugly 11% drop in same-store sales and a slightly uglier 12% drop in estimated revenue for the quarter. The market didn't fully price in the pain, as it only took a reiteration of these same numbers in hhgregg's final quarterly earnings report to shave another 19% off the retailer's market cap in one day.

Competitor Best Buy didn't do much better, but its numbers weren't quite as brutal as hhgregg's, and it has more resources and a much larger national footprint, with nearly 1,600 total locations in North America to hhgregg's 228. Best Buy also offers a wider selection of products and has promised to match the price of any competing retailer, even at the cost of its own short-term profitability. What does hhgregg offer consumers that Best Buy and other competitors don't? If you can answer that question, this might be the turnaround candidate for you -- but if you can't come up with a good response, toss this one out.

Qiwi
After surging through the latter half of 2013 following a hot IPO, Qiwi crashed after the new year as concerns began to mount that the Russian payment-systems company might be crimped by new Russian anti-terrorism regulations governing cross-border payments. The drop stretched out over most of the month, with the worst of it occurring in the second half of January: 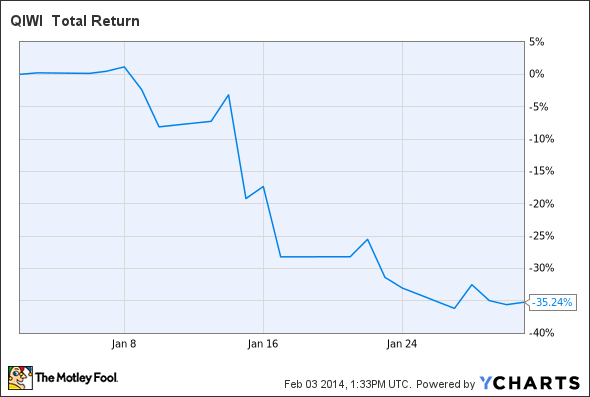 According to one Bloomberg report, anonymous financial transfers will be limited to less than $30 a day if a new bill introduced in the Russian Duma becomes law. Russian President Vladimir Putin took time out of his busy day of riding bears and wrestling sharks to voice support for greater security measures, which are bound to include some form of financial clampdown -- the wave of restrictions placed on American financial transactions after the Sept. 11 attacks could be one guide, and Russian lawmakers are not particularly known for their restraint.

However, Qiwi may be affected far less than investors think. Moscow-based analyst Andrey Shenk told Bloomberg that the "panic reaction" was not rational, and that the company, which operates more than 150,000 payment terminals in Russia, shouldn't be harmed, as the legislation wasn't likely to become law. Some restrictions seem inevitable, but Qiwi's focus on bill payments and other basic financial transactions should insulate it from harm. Considering its growth rate (analysts expect 32% earnings per share growth for the 2014 fiscal year) and its strong 3.5% dividend yield, this drop might be an excellent buying opportunity for adventurous international investors.

J.C. Penney
Poor, poor Penney. Last month, its stock got smacked around harder than Peyton Manning in the Super Bowl. At least Peyton had a great regular season; J.C. Penney's been playing more like a second-string high-school quarterback tossed into the big game as a last resort, and the results speak for themselves: 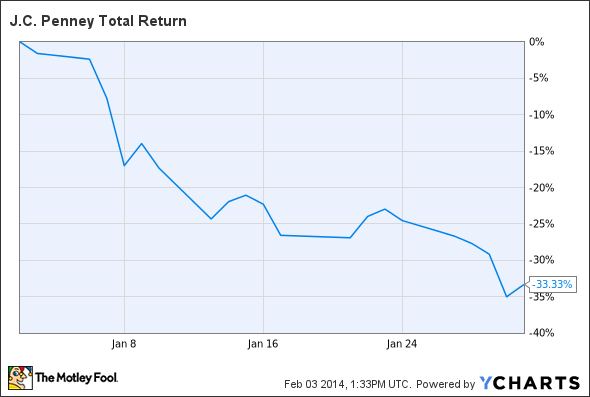 This isn't the worst of it, as J.C. Penney has fumbled away 70% of its value in the past year and has dropped more than 90% of its value from pre-financial-crisis highs. Losing about $1 billion in 2013 will do that, but Penney also seems to have no viable tunaround plans -- Fool contributor Dan Moskowitz pointed out that its latest belt-tightening will save only about 7% of the money it lost last year.

Hiring former Apple retail head Ron Johnson was nothing short of disastrous for Penney, but it has also had to fight against trends that have not gone its way for years. The brand itself is no longer attractive to American shoppers, and none of the company's efforts over the past few years have managed to restore the polish to Penney. The department store chain has $1.2 billion left in the bank but also carries $5.6 billion in debt that it has no easy way to pay down. The stock might bounce around a bit from here, but profitability is probably not on the near-term horizon. Retail doesn't look like a good turnaround play in 2014.

The Motley Fool recommends Apple. The Motley Fool owns shares of Apple and GameStop. Try any of our Foolish newsletter services free for 30 days. We Fools may not all hold the same opinions, but we all believe that considering a diverse range of insights makes us better investors. The Motley Fool has a disclosure policy.

Why the Dow Roared 158 Points Higher As J.C. Penney and Sears Lost Out